Kastles Home and Away Schedule Released! 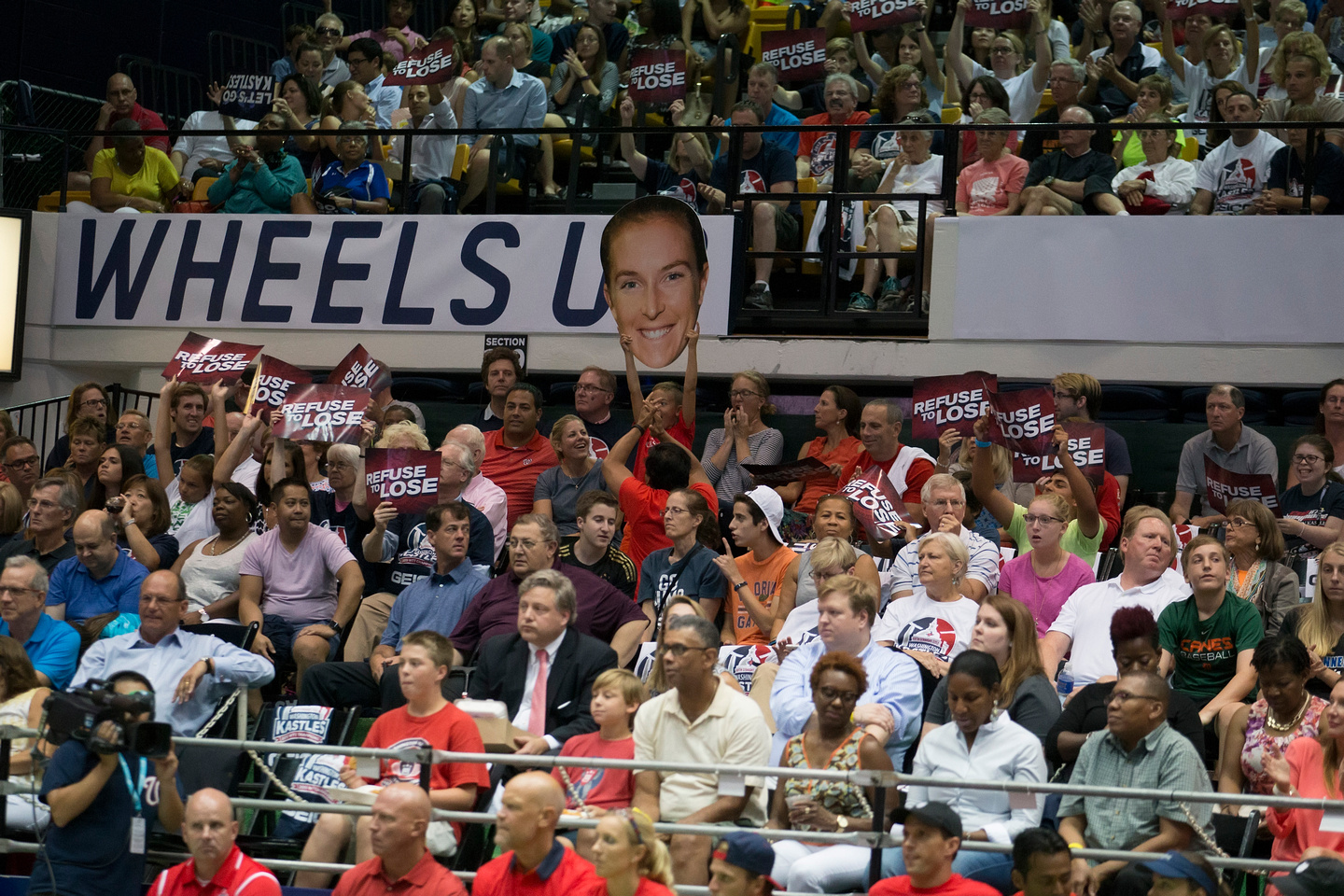 The 2017 Kastles schedule has been released and the landmark 10th Anniversary Season promises to be the best yet! With strong competition throughout the league, each match promises dramatic action and to be a thriller to the last point. Fans can expect a lot of parity across the league and for the season to come down to the last matches of the season for a shot at playing for the King Trophy in the World TeamTennis Finals.

Each of our home matches will feature some of the best and biggest names in tennis. We are excited to be bringing back Kastles favorites Venus Williams, Martina Hingis, the Bryan Brothers, Sam Querrey, Madison Brengle and Anastasia Rodionova as well as our new additions local phenom Frances Tiafoe and top-10 doubles star Bruno Soares. Kastles Stadium will be rocking so get your season tickets today to see the Kastles play for a 7th World TeamTennis title!

In the Mylan WTT draft this year, the Kastles were able to load their bench with a first-class lineup, including three of the top 8 men’s doubles players in the world. But the draft was crowded with more talent than ever. That means the season will be no cakewalk for the red and blue. The Kastles’ fiercest rivals secured formidable firepower in retaliation. From coast to coast, the competition will be advancing on Washington in hopes of dashing the Kastles’ dream of a 7th Title.

The San Diego Aviators pose a three-headed threat in the shape of Raven Klaasen, Rajeev Ram, and Shelby Rogers. Taken separately, Klaasen and Ram are menacing enough. Klaasen has won 12 career doubles titles; Ram (a former Kastle) has won 11. But together they are one of the hottest doubles teams in the world right now. They just captured the BNP Paribas Open title in Indian Wells and a few weeks before that they swept Delray Beach. By the time the WTT season gets underway, who knows how many more trophies they’ll have? And Rogers is equally scary. The 59th-ranked assassin from Charleston has slayed some of the biggest giants in the game, including Karolina Pliskova and Petra Kvitova during her incredible run to the quarters of the 2016 French Open. In addition, the trio will be assisted by Darija Jurak, who last month won the Acapulco women’s doubles title with Kastles linchpin Anastasia Rodionova. Appearing Thursday, July 20.

Just up the coast, the Orange County Breakers are also undertaking a fearsome enterprise. They’ve enlisted Yanina Wickmayer to carry their banner this season. The Belgian star will march into Washington with great expectations for her debut WTT season, and with good reason. Yanina has won 5 WTA singles titles and been ranked as high as #12 in the world in singles. She’s also a skilled doubles player, having won 2 doubles championships, including the Citi Open in Washington last year with Monica Niculescu. Wickmayer will be joined this season by veteran WTT warrior Teymuraz Gabashvili. The Russian journeyman returns to the league after taking last summer off to compete in the Olympics. Nicknamed “the Teymurnator,” Gabashvili is a force to be reckoned with. In 2015, he won the Mylan WTT Male MVP award. Playing for the Austin Aces, he hit 52 aces in 14 matches and led the league in men’s singles with a .612 winning record. He led the Aces to an 8-match winning streak that was ultimately broken in Austin by the Kastles and Sam Querrey, who was finally able to cut the Teymurnator down to size. Gabashvili also featured for the Aces in the 2015 finals against the Kastles which the Kastles won 24-18 for a fifth consecutive title. Appearing Wednesday, July 19 & Saturday, July 29

In New York, the Empire added a world-class talent in marquee player Mardy Fish to lead their charge. Fish, a household name in tennis, has won 6 ATP titles and reached a career high ranking of #7 in the world. Kastles fans may remember that Fish was on the Kastles roster last season, only to get hurt two games into his first set on the team – ironically against his new team and new teammate, Argentinian Davis Cup and Olympic team member Guida Pella. The Empire is confident the big-serving American can extend its realm by playing in every match, including New York’s two visits to Kastles Stadium. Coupled with Kirsten Flipkens, the Kastles will have to use every bit of Jedi power to defeat the Empire this year. In 2003 the Belgian won the Wimbledon Girl’s Singles Championship. Ten years later she made the semis in the Ladies’ Championship, which was no small miracle. After doctors discovered four life-threatening blood clots in her leg in the spring of 2012, many thought she would never return to the pro tour. They didn’t know Flipkens. The former world #13 will come prepared to inflict serious damage this season. Appearing Tuesday, July 18 & Wednesday, July 26.

In the “City of Brotherly Love,” the Philadelphia Freedoms are mounting an ambitious campaign of their own. They managed to recruit former Kastle Sloane Stephens to lead the vanguard. The American star has 4 WTA titles to her name, along with a career-high ranking of #11 in the world. There’s no one in the world she can’t beat. Those who watched the 2013 Australian Open may recall her stunning win over Serena Williams. On top of Stephens, the Freedoms will be supported by talented up-and-comer, Taylor Townsend. The 20-year-old lefty from Chicago won the 2012 Australian Open girls’ singles championship and is the former girls’ singles world #1. She’s also pretty handy at doubles. Last year Townsend won 8 challenger doubles titles and made 2 other finals. Townsend is also no stranger to WTT. She has played against the Kastles many times before, including 3 matches during the Kastles’ historic 2015 season. In the 2014 Eastern Conference Championship match at Kastles Stadium, she was memorably forced into playing doubles alone against Hingis and Rodionva after her teammate Liezel Huber was struck with a ball and had to leave the match. You can bet she will be looking to settle the score this year at Kastles Stadium. Appearing Friday, July 21.

And last – but certainly no less dangerous – is Jean-Julien Rojer, another deadly doubles specialist, playing for the Springfield Lasers (the Kastles most historic rival). The Dutchman has won 22 career doubles titles, including a Wimbledon and 3 ATP World Tour Masters 1000 crowns. Just this month, he won the Dubai Duty Free Tennis Championships with his long-time partner Horia Tecau. Rojer was also part of the 2013 Lasers team that was routed 25-12 in the 2013 WTT Finals at The Wharf. This summer Rojer will be accompanied by another top-notch starter: Daria Kasatkina. The 19-year-old, Russian world #35 is one of the fastest rising stars on the WTA tour. Last year, in her first full season on tour, Daria made it to the third round of all four majors, as well as the quarters at the Olympics in Brazil. In her very short career, Kasatkina has already won 7 challenger titles and a WTA tour championship (Saint Malo) and scored wins over Venus Williams, Sara Errani, Samantha Stosur, Roberta Vinci, Carla Suárez Navarro, Dominika Cibulkova, and Kirsten Flipkens, among others. Appearing Tuesday, July 25.

The competition is definitely tough, but when have the Kastles ever backed away from a challenge?

The 2017 season is fast approaching and you can lock in the best seats now to cheer on your Kastles as the team looks to claim their 7th overall World TeamTennis Championship and celebrate their landmark 10th season! With a Kastles blockbuster line-up of stars each night, expect the competition to be fierce as the opposing rosters are equally loaded with talent. Season ticket holders are in for seven nights of unbelievable competition on the court.

Season tickets are currently on sale and are the best way to lock in these “Seven Sensational Summer Nights” as individual match tickets won’t be available until later this spring. You won’t want to miss a minute of the action as Venus Williams, Martina Hingis, the Bryan Brothers, and recently added Sam Querrey, doubles ace Bruno Soares, and hometown phenom Frances Tiafoe join the rest of the Kastles to bring the King Trophy back to DC.

With access to the best seats in each section, a discount to individual match pricing, and a wide range of exclusive perks, season tickets are the best way to join the Kastles for this historic 10th season running from July 16 – Aug. 2. A limited number of four-seat VIP tables and boxes are available, as well as individual seats with spectacular views in the Kastles Baseline Experience and Kastles Baseline Club. But hurry, the best seats in each section are going fast! Season tickets start at $150 and can be purchased by calling 202-4-TENNIS (483-6647).