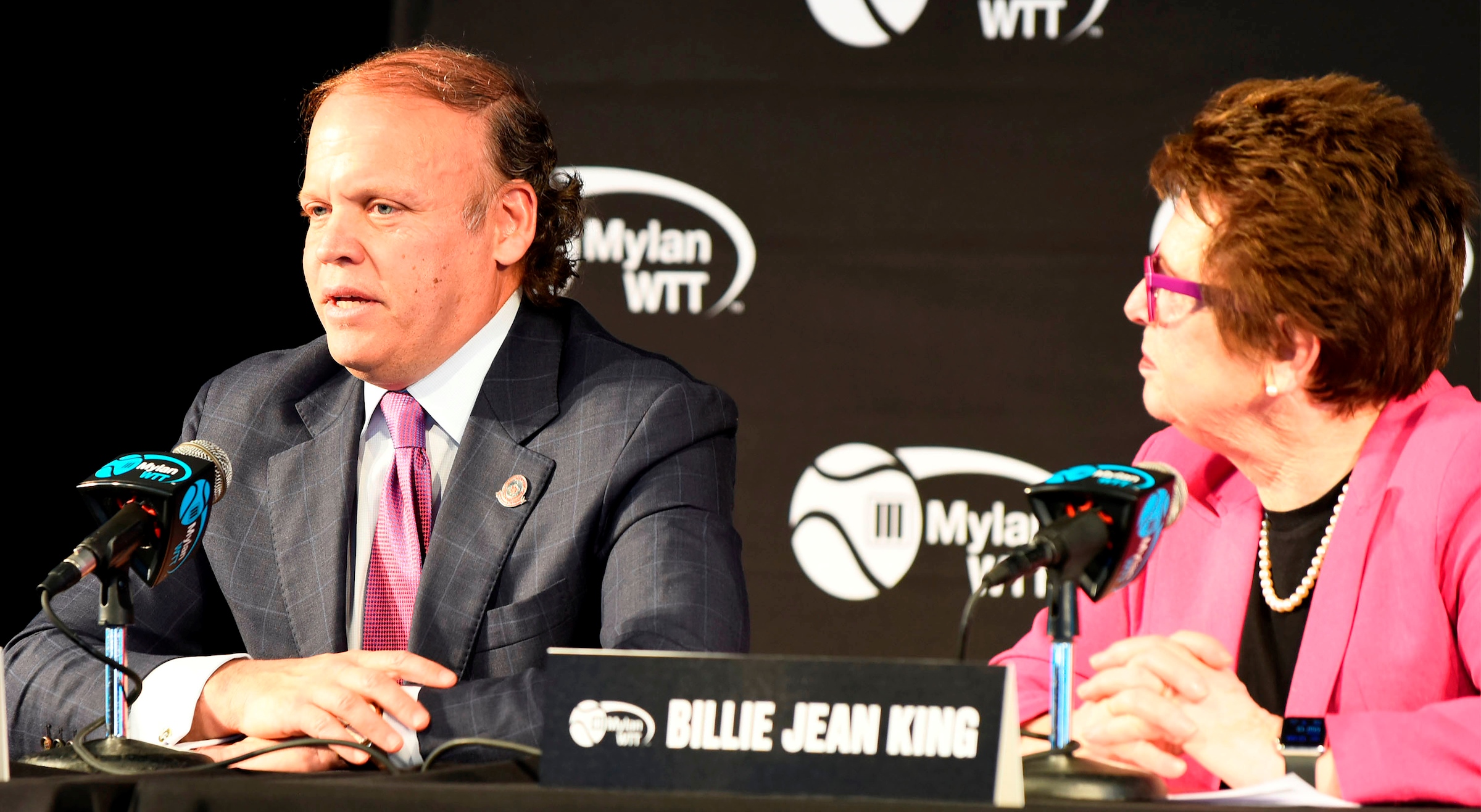 The league is announcing at a press conference today at 3pm EST that its co-founder and sports icon Billie Jean King sold her majority ownership of the organization to Kastles owner Mark Ein, who will become Chairman of WTT, as well as Fred Luddy, owner of the San Diego Aviators.

Going forward, King will retain a minority stake in WTT and continue as the majority owner of the Philadelphia Freedoms franchise. Ilana Kloss, who has served as CEO and Commissioner since early 2001, will remain in her position through 2017.

“After forty-two seasons of World TeamTennis,” said King, “Ilana and I are extremely happy that the legacy and future of WTT as an innovative force in tennis will be entrusted to Mark Ein, Fred Luddy and their team. I am looking forward to continuing to be a part of the league as it grows and prospers in exciting new ways under Mark and Fred’s leadership.”

Kastles fans may not be surprised to see their owner Mark Ein step into the new leadership role. Since its founding in 2008, the Kastles have enjoyed incredible success on and off the court and has become the model franchise for the league.

In only nine seasons, the Kastles have won a record tying six WTT championships (including five consecutively from 2011-2015 which is a league record), the only two perfect seasons in league history which they accomplished back-to-back in 2011 and 2012, and a 34 match winning streak which is the longest streak of any major U.S. pro sports team in history.

The Kastles have, literally, attracted the best players in the world to play for Washington, including former-world no. 1 players Serena Williams, Venus Williams, Martina Hingis, Victoria Azarenka, Leander Paes, and Bob and Mike Bryan. All combined, Kastles players have won an astounding 157 Grand Slams titles!

But the Kastles’ success extends beyond box office sales and television ratings. “Owning and building the Kastles has been one of the most meaningful experiences of my life,” said Ein.

Indeed, the Kastles founding principles were about a commitment to a community mission and making a significant impact in the Greater Washington region. Going into their 10th anniversary season, the Kastles have made donations totaling over $1,168,200, donated over 15,300 match tickets and 8,300 tennis racquets, provided 44 free junior tennis clinics, giving kids the opportunity to play with tennis greats like Serena and Venus Williams, the Bryans, and Martina Hingis in Kastles Stadium, and in 2016, teamed up with JPMorgan Chase to give away a free home to a wounded U.S. veteran and his family.

This winning formula that has defined the Kastles’ success will be the guiding principles to steer the league forward to new heights, starting with finding new owners who are equally committed to investing in and operating their teams similar to the Kastles approach in the Washington, DC region.

“The success we have enjoyed on and off the court will provide a template for how we can grow WTT across America with other like-minded owners that love tennis, want to make a profound impact in their communities, and have the same opportunity of a lifetime that we have enjoyed,” said Ein.

The new owners announced that they are talking with and seeking prospective new owners to add four new franchises in major markets for the 2018 season.

Ein will be joined by Fred Luddy (founder and Board Member of the $15 billion market cap software company ServiceNow (NYSE: NOW) who in 2015 became the majority owner of the San Diego Aviators and in 2016 lead the franchise to its first WTT championship.

“Since 1974,” said Luddy, “World Team Tennis has not only provided tennis fans with some of the best competition, but has also introduced philanthropic initiatives to the participating communities. We look forward to carrying on the legacy both on and off the court.”

The new ownership team will leverage their entrepreneurial success and experience building two of WTT’s leading franchises to create compelling growth opportunities for the league and its partners. Ein and Luddy plan to invest in the league’s platform and expand franchises nationally, bringing great tennis to fans and audiences in key major markets across the country.

As a part of the transaction, LionTree Partners, one of the leading media and entertainment merchant bank and advisory firms, has invested in WTT alongside Ein and Luddy. LionTree will assist in attracting new franchise owners, consummating new media partnerships and forming new league sponsorship relationships.

World Team Tennis is the fifth longest-running major professional sports league in the United States, trailing only the NFL, NBA, MLB and NHL in longevity. Founded in 1974 on King’s philosophy of gender equality, the league has showcased tennis’ greatest stars sharing the stage for WTT’s team-oriented play for over four decades. Stars such as Chris Evert, Martina Navratilova, Jimmy Connors and King highlighted the league’s early years, with other greats like Andre Agassi, Andy Roddick, the Williams Sisters, and Martina Hingis participating in recent years.

And 2017 continues the tradition of presenting world-class talent with a player lineup that includes Venus Williams, Martina Hingis, Andy Roddick, Bob and Mike Bryan, Sloane Stephens, John Isner, Jack Sock, Mardy Fish and Eugenie Bouchard. By the time the league completes its 42nd season with the Mylan WTT Finals on August 5, more than 900 professional tennis players from across the world will have competed in World Team Tennis action. Team lineups will be finalized at the Mylan WTT Roster Draft on Tuesday, March 14 in Indian Wells, Calif.

The agreement includes the Mylan WTT Recreational League which provides grassroots outreach and support in team communities throughout the year. Since the Recreational League started in 1985, more than one million tennis players of all ages and abilities have participated in the Rec. League events and grassroots programs featuring the WTT team format.

Rec. Leagues have been played in more than 1,000 venues, including parks, schools, military bases and tennis facilities throughout the U.S. The league is involved in more than 40 grassroots events annually, including Mylan WTT National Qualifiers and Nationals for adult league players, the WTT Junior Nationals invitational event for ages 14-18, and the “Tennis on Campus” program, which uses the WTT format for sectional and national college sport club competitions. Aligning with the professional markets, the Rec. League has also introduced “12 & Under Team Tennis” circuits, youth play days and clinics, and high school recognition programs. Over the past decade, WTT and team franchises have distributed more than 300,000 free junior racquets at matches, play days, and other special events.

When asked about teaming up with the owner of his franchise’s fiercest current rival for this monumental venture, the Kastles owner was all business.

“Great rivalries are always what catapult the sport forward,” said Ein. “Look at Federer and Nadal, Navratilova and Evert, King and Riggs. Succeeding a pioneer like Billie Jean King is an incredible honor and also obligation. Fred and I are committed to taking the incredible product that she created and significantly growing and building WTT 2.0 to thrill a new era of fans.”