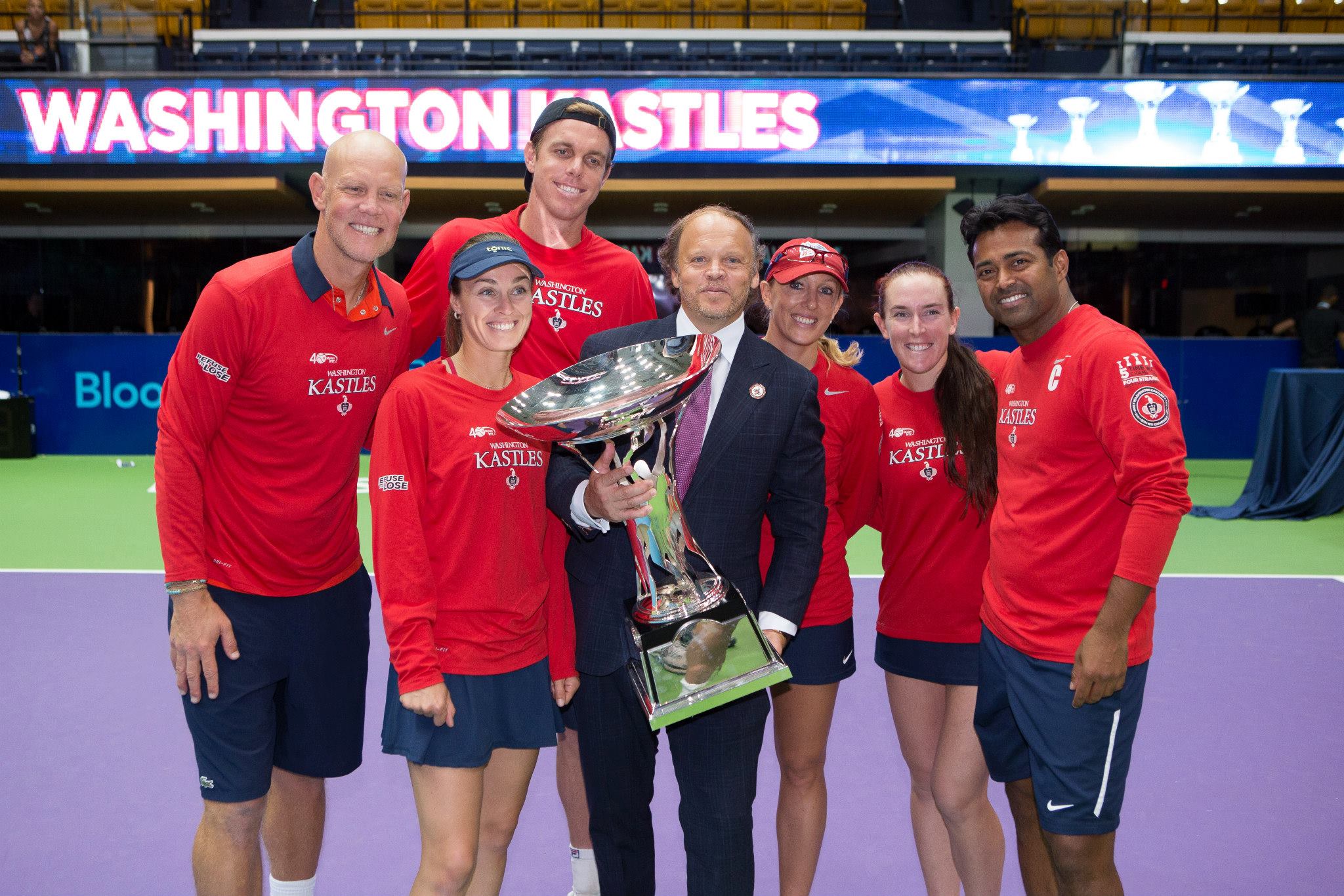 To cap the 40th season of Mylan World TeamTennis, it was only fitting that the Washington Kastles made a little history, winning their record-setting fifth consecutive King Trophy by defeating the Austin Aces 24-18 on Sunday.

Washington surpassed the 1997-2000 Sacramento Capitals for the most consecutive Mylan WTT Championships. The Kastles also tied the Capitals for most overall titles with six, dating back to Washington’s first championship win in 2009. For a franchise that only started eight seasons ago, six titles is a winning run virtually unmatched in any sport.

This was a WTT Finals match loaded with talent on both sides of the court with eight of the nine players ranked in the top 53 in the world in either singles or doubles and five ranked in the top 25. On paper, it was a very even match with the edge, if there was one, to Austin based on the season’s results and individual rankings.

Yet, the Kastles players and franchise have a history of rising to the occasion in the biggest matches and against the hardest competition. In addition to winning the multiple championships, the Kastles had actually swept every set in the previous two WTT Finals matches against two other very talented teams.

All five members of the Kastles’ roster played a big part in this 2015 team’s historic triumph, from returning players Leander Paes, Martina Hingis and Anastasia Rodionova, to newcomers Sam Querrey and Madison Brengle.

It was Brengle who clinched championship point, putting away a swinging backhand volley against French Open quarterfinalist and World No. 20 Elina Svitolina.

Past and present Kastles rejoiced as Brengle and coach Murphy Jensen embraced.Arina Rodionova, who was the 2011 WTT Female Rookie of the Year and Finals MVP, cheered from the crowd. Rennae Stubbs, who played on Washington’s 2009 and 2011 championship teams, fought away a smile while broadcasting for ESPN2.

Kastles Captain Paes, who clearly sets the tone with his leadership and unrivaled intensity in the biggest matches, was named Finals MVP for the first time on Sunday after winning mixed doubles with Hingis 5-2 and men’s doubles with Querrey 5-3. The 30th-ranked Querrey also contributed a 5-4 singles victory over 53rd-ranked Teymuraz Gabashvili, while Hingis won a tiebreaker in women’s doubles with Rodionova.

Washington won the first four sets of a match in which Mylan WTT Coach of the YearRick Leach of Austin chose the order of play. The Aces had that honor courtesy of their league-best record and decided to back-end load the men’s and women’s singles sets where they had won the exact same player match-ups 5-0 and 5-1, respectively, just five days earlier in Austin.

With Svitolina, one of the world’s hottest players, in the Aces all important and pressure-packed, final set position in which any comeback is possible, it was not lost on any of the players on either squad that the Kastles badly wanted a large cushion going into the last two sets. But the strength of the Kastles team has always been the doubles with legends Paes and Hingis leading the way and Leach’s team never recovered from a decisive doubles sweep of the first three sets courtesy of the Kastles’ Paes/Hingis, Hingis/Rodionova and Paes/Querrey. With Querrey and Brengle riding that momentum and powerful emotion of the passionate Kastles Stadium crowd to inspired performances, the Kastles singles stars were able to close out the Championship.

Coming into the match, Washington (12-4) entered with two losses in three regular-season matches against Austin (13-3), but in front of a rabid crowd and a nationwide television audience, the Kastles only trailed once in the Mylan WTT Finals.

That was when Gabashvili held serve in the opening game of the match in mixed doubles, but Austin’s lead didn’t last long. After Paes held, the Kastles picked on 2013 Washington substitute and Rodionova’s 2014 WTA doubles partner Alla Kudryavtseva, who donated three errors and her serve in the third game.

After holds by Gabashvili and Paes, Kudryavtseva missed a backhand, a forehand and two second serves to concede a second break and give the Australian Open and Wimbledon champions a 5-2 win.

Kudryavtseva’s struggles continued in the second set of women’s doubles as she was broken in Austin’s first service game. With Hingis poaching for winners and making half-volleys look easy, the Kastles looked they were going to run away with the set when they were leading 2-0 and had four game points on Hingis serve to go up 8-2 in the match. But the Aces managed to win the game and stop the momentum.

After the Kastles broke back for 3-1, Svitolina took over the match as her team broke Rodionova in the following game, Kudryavtseva held for the first time, and the Aces broke Hingis again to take a 4-3 lead and narrow the overall score to 8-6 in favor of the Kastles.

Needing to stem the tide to avoid losing the set, Hingis hit two forehand volley winners and Rodionova struck a strong backhand return to break Svitolina and force a tiebreaker.

Two more vintage Hingis winners in the critical tiebreak – which would account for a two game swing for the winning team – allowed Washington to take a 4-2 lead, and the Kastles clinched the set two points later when Svitolina netted a forehand.

With his team up 10-6 overall, Paes came off the bench to electrify the crowd in the third set of men’s doubles. On a 3-all break point in the third game, the Kastles duo decided to make the rare decision to have Paes, rather than world-class baseliner Querrey, take the return. That decision proved to be the right one when Paes struck a sensational low backhand inside out slice return that set up Querrey for a volley that Jarmere Jenkinscouldn’t handle, allowing Washington to earn the first break and take a 2-1 lead.

After Paes nailed a backhand volley in the next game to make it 3-1, he shouted, “OUR HOUSE,” as fans roared from the rafters at Kastles Stadium.

On the very next point, Paes read a Gabashvili first serve and pounded an inside-out backhand return winner. This time he yelled, “COME ON,” after Gabashvili could not retrieve his spectacular shot.

The set stayed on serve until it was on Paes’ racquet at 4-3. Austin forced a 3-all point, but Paes hit three consecutive reflex volleys, baiting Gabashvili into a forehand error that allowed Washington to win the set 5-3.

The Kastles led 15-9 overall, but the two sets remaining were bad ones for Washington in their final regular-season match against the Aces. On Tuesday, Gabashvili beat Querrey 5-0 and Svitolina defeated Brengle 5-1. Had those scores repeated, Austin would have won the 2015 Mylan WTT Championship.

Yet, the Kastles wrote a new script as Querrey slammed six aces in the fourth set. Gabashvili countered with a flurry of forehand winners as neither man earned a break point en route to a tiebreaker.

The tiebreak, too, stayed on serve with Gabashvili facing three set points on his racquet at 2-4. He saved the first with an unreturnable serve, but, on the second, he missed another forehand winner by inches. The Russian argued vehemently while Querrey celebrated a 5-4(3) victory.

Up 20-13, the Kastles turned their championship hopes to Brengle, who was only originally scheduled to play five matches for the team during the first week of the season.

Svitolina won 12 of the first 13 points against Brengle on Tuesday, so a seven-game comeback was not out of the question. But the 44th-ranked Brengle went toe to toe with Svitolina through six games on Sunday, claiming a pair of 3-all deciding points, the second of which tied the set at 3-3 and protected Washington’s overall lead at 23-16.

After Svitolina held for 4-3, Brengle faced another 3-all point on her serve, but this time she netted a backhand, snapping an incredible a 16-set winning streak for Washington in the Mylan WTT Finals dating back to 2012.

Though Austin won the set 5-3, Washington held a 23-18 advantage entering extended play. All Brengle needed was one game to clinch the match. Svitolina needed five to force a Supertiebreaker.

The pressure on both players in the emotionally charged stadium was palpable as the 20-year-old Ukrainian missed a pair of forehands on the first two points of extended play. Brengle hit a poor drop shot to lose the next point, but prevailed in an extended rally on the next point when she crushed a crosscourt forehand winner to give her a 3-1 lead in the game. With three championship points, Brengle only needed one, attacking the net and putting away a swinging backhand volley that brought all of Kastles Stadium to its feet in jubilation.

Brengle’s teammates fled their bench and mobbed the 25-year-old at mid-court, celebrating the continuation of one of the most impressive dynasties in all of professional sports.

Not only have the Kastles won five straight titles and six in seven years, but Washington is 70-10 since the start of the 2011 season (.875 winning percentage).

There are always more records to be broken and next up on the Kastles’ bucket list is a seventh Mylan WTT title in 2016, which would eclipse the all-time record of six shared by Washington and Sacramento who was in the league for over 20 years.

If you are interested in purchasing or renewing season tickets for one of the greatest experiences in sports, or if you have any Kastles-related questions, please call us at 202-4-TENNIS (483-6647) or E-mail us at info@washingtonkastles.com. We welcome all input, suggestions and feedback.

Stay tuned for more details on next season and exciting off-season news in the near future.

Thank you for once again being the best fans in tennis and inspiring our franchise to historic heights.