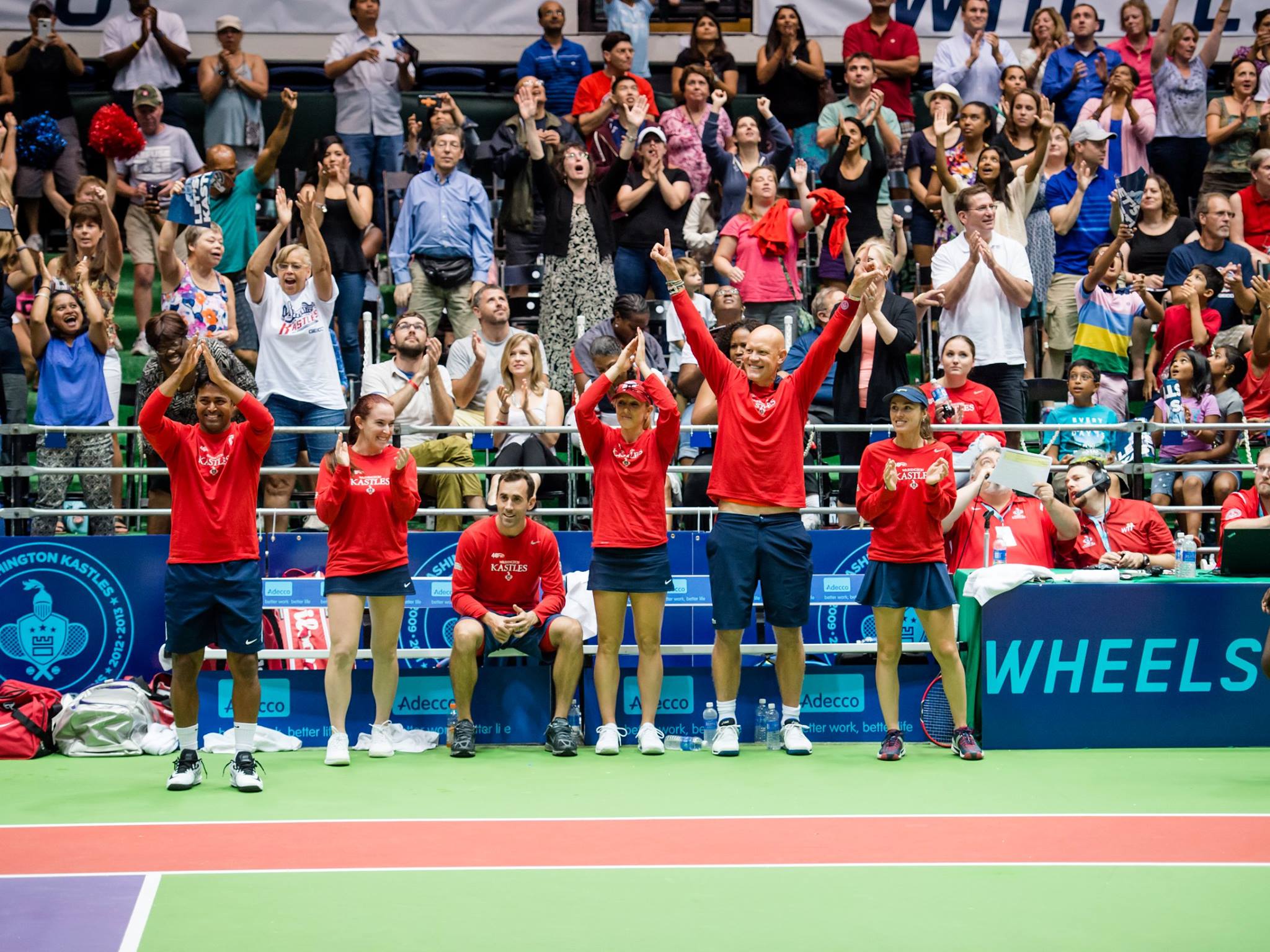 The Washington Kastles are one win from Mylan World TeamTennis history after routing the Philadelphia Freedoms 25-9 to capture the Eastern Conference Championship on Thursday.

If the Kastles defeat the Austin Aces in the Mylan WTT Finals, Washington will become the first franchise in 40 years of team tennis to capture the King Trophy five straight times.

By sweeping Philadelphia, the Kastles improved to 11-0 all-time in the postseason and earned their most lopsided playoff win ever.

Anastasia Rodionova, the league’s top-rated women’s doubles player, was recognized before the match as the 2015 Mylan WTT co-Female MVP with Anabel Medina Garrigues of the California Dream.

Rodionova was congratulated by the three other Kastles to be named Most Valuable Player: Leander Paes (2009 & 2011), Martina Hingis (2013) and Bobby Reynolds (2012), who surprised his former teammates and served as assistant coach.

Paes and Hingis, the Wimbledon and Australian Open champions, got things off to an ideal start.

The Kastles lost all three of their mixed doubles sets to the Freedoms during the regular season, but that was without Hingis in the lineup.

With Hingis alongside her championship partner, the Kastles won a 3-all point in the first game when Paes hit a backhand drop volley winner.

After holds by Marcelo Melo and Hingis, Paes carved a volley into the Kastles’ bench to break Taylor Townsend, roaring in delight as he gave Washington a 3-1 lead.

Paes followed with a service hold for 4-1 — Melo slamming his racquet three times on the court in aggravation.

In the next game, Paes and Hingis arrived at set point with a play that Paes and Reynolds made famous: The Kastles captain dipped a return and his partner migrated towards the middle of the court for the put-away volley.

Washington went on to win the game, and the set 5-1, when Hingis won a rapid volley exchange at the net over Townsend.

Perhaps in team spirit, the 44th-ranked Brengle sported red highlights in her hair and played red-hot on the court versus the 32nd-ranked Vandeweghe.

She beat Vandeweghe in straight sets at the Australian Open, and used that confidence to take a quick 3-0 lead, keeping her shots close to the baseline and tempting her countrywoman into going for too much.

Vandeweghe changed tactics for the remainder of the set, attacking the net off of her serve to earn a pair of holds.

But she couldn’t overcome her one-break deficit, and with Brengle serving at 4-2, the 25-year-old Kastle showed great variety to win the set. On the first point of the game, Brengle crushed a cross-court forehand winner. On the last, she sliced a forehand to draw Vandeweghe in, then blasted a shot that the Freedom could not control.

His team ahead 10-3, coach Murphy Jensen received a sensational performance in men’s doubles from his captain Paes.

After Sam Querrey held for 1-0, Paes dropped a volley winner off of the court and into the Kastles bench, having already honed that shot in the first set of mixed doubles.

Though Robby Ginepri managed to hold and even the set, Paes quickly made it 2-1 on his serve before working more magic at the net. He hit a pair of rapid volleys to steal the first two points on Melo’s serve, then generously accepted two volley errors from the Freedoms that gave Washington a 3-1 advantage.

Querrey rolled to another hold for 4-1, then Paes scrambled all over the court in an effort to break Ginepri. Though Ginepri won a 3-all point to make it 2-4, he scratched his hand on his head as if to say, “How hard do we have to work to win a game?”

The Freedoms would not win another as Paes served the set out with an overhead into Melo’s leg, a half-volley winner down the line, and a service winner that the French Open champion Melo frustratingly forehanded over the Kastles’ team bench.

With their 5-2 men’s doubles win, the Kastles increased their overall lead to 15-5 for Hingis and Rodionova in women’s doubles.

Rodionova hit an MVP-worthy return winner to help break Vandeweghe in the first game, then a flat ace out wide to hold for 2-0.

Townsend, Hingis and Vandeweghe each held thereafter, and when Rodionova served up 3-2, Vandeweghe poached for a backhand volley winner to break back and even the set a 3-3.

In the next game, Townsend hit back-to-back service winners to save two break points and give Philadelphia a 4-3 lead. Hingis responded with a hold of her own, forcing a tiebreaker.

The teams were tied at 2-2 in the tiebreak when Rodionova and Hingis both hit strong returns to draw volley errors from the Freedoms. One point later, Hingis served the set out 5-4(2) and extended Washington’s lead to 20-9.

Mylan WTT rules open the door for comebacks of any size, but 11 games proved too much for Ginepri to mentally handle in the final set.

A night after winning the final set 5-0 against Boston, Querrey did it again with an overwhelming display of power. He held for 1-0 with an ace out wide, broke for 2-0 by punishing a forehand winner, then held for 3-0 with an inside-out forehand put-away.

In the fourth game, Ginepri netted a forehand on a 3-all point to give Querrey the honor of serving out the match, which he immediately did at love.