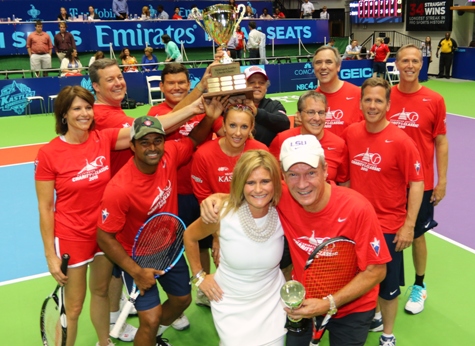 Team Stars celebrates with the Kastles Cup after winning the 2015 Charity Classic. (Photo by Kevin Koski)

Tragedy Assistance Program for Survivors (TAPS), DC Public Education Fund, and Food & Friends each received checks for $10,000, splitting 100% of the ticket sales in addition to extra donations made by Charity Classic sponsors.

Congressmen, media members, Kastles players and even D.C. United head coach Ben Olsen brought out their best shots for a great cause. 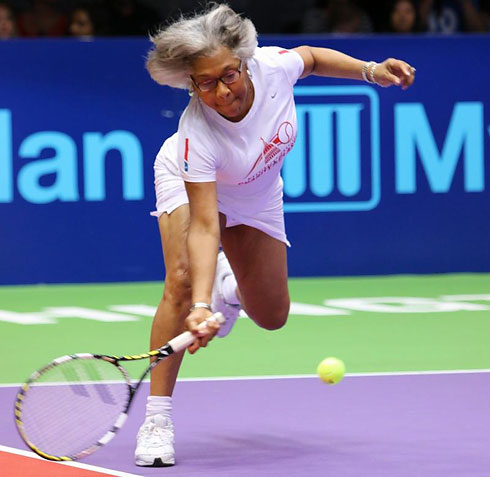 Congresswoman Joyce Beatty gets low in a losing effort to start the match. (Photo by Kevin Koski)

From the start, however, it was clear that Team Stars was especially motivated to lift the Kastles Cup for a second time.

The Fox News duo of Ed Henry and Bret Baier extended Team Stars’ lead to 14-6 by beating ABC News’ Jonathan Karl and John-Paul Flaim of The Sports Junkies 7-4. Baier hit two consecutive volley winners to clinch a tiebreaker that saw Karl run over the back wall in an effort to retrieve a shot. 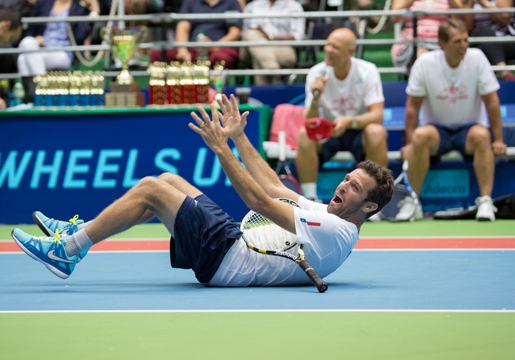 Ben Olsen could not believe the shot that Leander Paes hit at 6-6 in the third tiebreaker. (Photo by Willis Bretz)

An owner, a coach and two of the greatest tennis players in the world took the court for the third tiebreaker, pitting Leander Paesand Mark Ein of Team Stars against D.C. United’s Ben Olsen and Sam Querrey. Nothing separated the two doubles teams after 12 points, bringing about a winner-take-all scenario at 6-6.

The pressure was on Olsen, who missed his first serve and followed his second into net, placing a volley past Ein and into the open court. But as he’s done so often for the Kastles, Paes got himself into position quickly, backed up his partner, and surprised Olsen and Querrey with a down-the-line forehand winner.

But the Team Stars pair was on fire, starting with a poach volley winner and a strong return by Sperling. At 2-0, Breaux hit a world-class running cross-court forehand winner that Dent dove unsuccessfully for. Within seconds it was 6-0, and even a ferocious first serve by Flake did not phase Breaux, who returned it with ease to force an error and complete a shutout.

His team trailing 28-12 after four tiebreakers, Team Stripes coach Murphy Jensen took matters into his own hands in the fifth match-up, covering court like he was back in the final of the 1993 French Open. He and Querrey defeated Paes and Anastasia Rodionova 7-3 after a pair of sensational winners — a drop-volley by Querrey that fooled Rodionova with backspin and a crushing cross-court forehand by Jensen on set point. 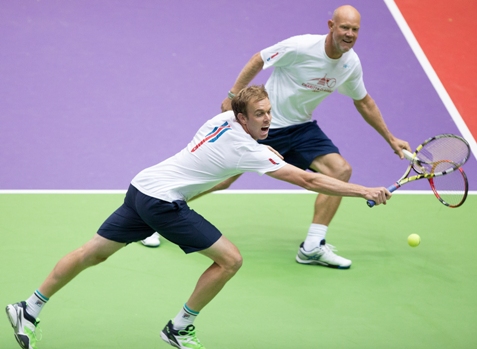 Sam Querrey cut in front of Murphy Jensen to hit a drop volley with unbelievable backspin. (Photo by Willis Bretz)

After that, the Republican Congressman Dent returned to the court and showed signs of the player who stole the show in 2014, hitting an aggressive overhead at Democratic Congresswoman Cheri Bustos. Dent and Representative Bobby Scott (D-VA) defeated Illinois’ Bustos and Senator Jeff Merkley (D-OR) 7-5, trimming Team Stars’ lead to 36-26 going into the seventh and final tiebreaker.

As is tradition at the Charity Classic, Team Stripes coach Jensen and Team Stars coach Paes were allowed unlimited substitutions in the final tiebreaker, which would be awarded to the first team to win 10 points.

Olsen emerged as the hero, hitting an ace, reaching a difficult shot to win a point, and hitting a passing shot winner on the deciding 9-9 point, allowing Team Stripes to extend the match into overtime.

Down 45-36 at the start of overtime, Jensen and Querrey substituted in for Team Stripes and won seven consecutive points to get within two of Team Stars.

All Team Stars needed was to win one point to secure the championship, and to do so, Paes and Rodionova took to the court for an All-Kastles showdown at 45-43. Paes missed his first serve, but Jensen was unable to make a second-serve return, bringing the Kastles Cup back to Team Stars. 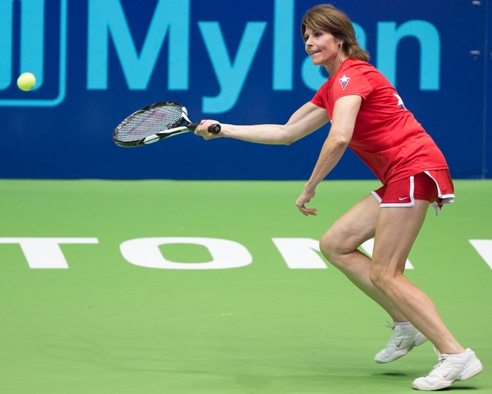 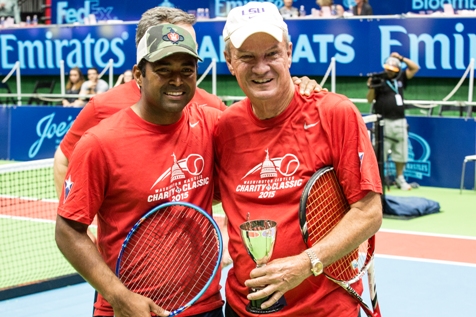