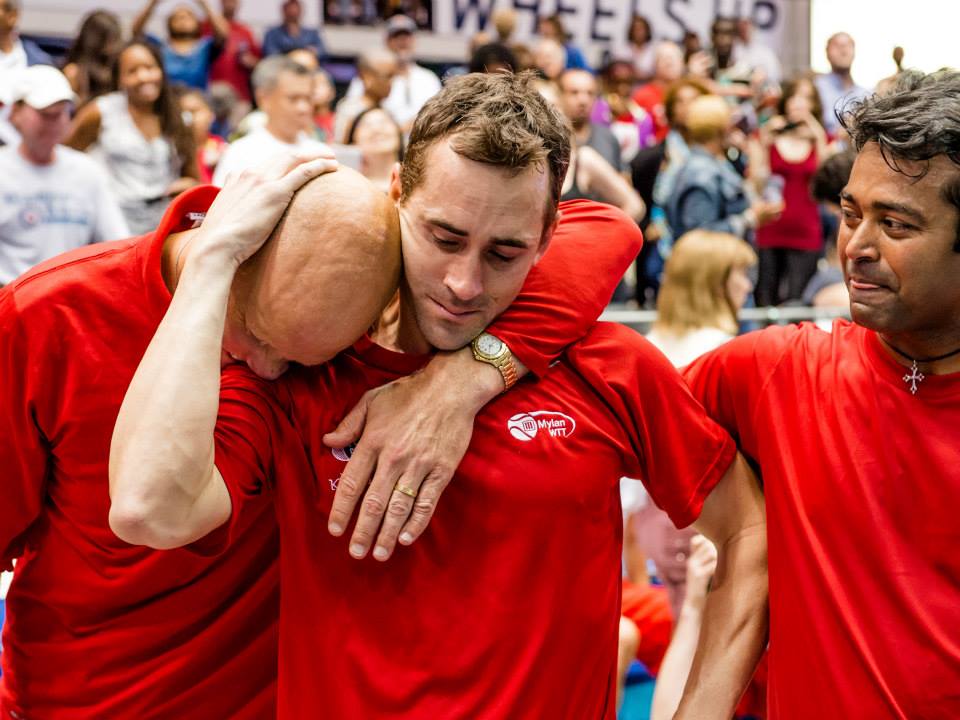 Bobby Reynolds made a decent living on the professional tennis tour: $1.6 million in prize money, wins at all four Grand Slams, memories from 24 countries and a men’s record 31 USTA Pro Circuit titles. But ask him where he played his greatest tennis and he’ll quickly point to one place: Kastles Stadium.

“This is, for me, one of the biggest stages,” Reynolds told Monumental Network before announcing his retirement on July 24. “To be out here every night with 3,000 fans going crazy, that’s why I get up so much for these three weeks. This is my time to shine.”

Reynolds came to World TeamTennis in 2010 seeking match practice. He found his calling instead, leading the Kastles to four straight WTT Championships with passionate, powerful play that far exceeded his career-high ATP singles ranking of No. 63.

With a penchant for finishing off opponents in the fifth and final set, Reynolds was named 2010 WTT Male Rookie of the Year, 2012 WTT Male MVP and 2013 WTT Finals MVP. Though he played alongside six World No. 1s, Reynolds was the only Kastle to compete in all 34 matches during Washington’s record-setting win streak from 2011 through 2013.

Retirement came naturally for Reynolds, whose wife Josie is expecting their second child.

Having starred for three seasons at Vanderbilt University, Reynolds has long talked about returning to college and finishing his business degree. When he spoke with Monumental Network, the 32-year-old American said that he may go one step further and become a college tennis coach.

After revealing his retirement plans, however, Reynolds had one more task to tend to as a player: the 2014 Mylan WTT Finals.

Closing a career in a championship match is unique. But if anyone could rise to the occasion, it was the man thousands of fans called the Kastles closer. Reynolds defeated lifelong rival Michael Russell 5-4 in singles, then earned a 5-2 men’s doubles victory with fifth-year partner Leander Paes.

There isn’t enough space in your inbox to describe Reynolds’ impact on the Washington franchise. So we’ll settle for five unforgettable moments from his five-year Kastles career.

During the Kastles’ first perfect season, D.C. fans were treated to three thrilling finishes in four nights. Reynolds closed all three matches, which were each decided by one game. The drama began when John McEnroe and the New York Sportimes came to town. McEnroe and Travis Parrott held three match points on Reynolds and Paes with a 6-4 Supertiebreaker lead. The Kastles closer, however, hit three straight strong serves to clinch a wild Washington win.

It took three rain delays, eight hours and nine championship points, but when Reynolds hit a service winner at 1:03 am, he and the Kastles clinched the first perfect season in 36 years of WTT. Reynolds met Roman Borvanov in the final set with Washington leading the St. Louis Aces 18-11. An inspired Borvanov cut the Kastles’ lead to three by winning a tiebreaker and the first three games of overtime. But Reynolds settled himself to serve out his team’s 16-0 season.

Paes, Venus Williams and Anastasia Rodionova missed the final four matches of the 2012 regular season due to the Olympics. That left Reynolds with three new teammates and a 26-match win streak to defend. The new-look Kastles went 4-0 thanks to Reynolds, who won 20 of 26 singles games without the Olympians. He led by example in the home finale against the Philadelphia Freedoms. With the score tied at 16-16, Reynolds closed out Luka Gregorc 5-0.

The men’s singles set during the 2013 Mylan WTT Finals was unpredictable. With former World No. 1 Andy Roddick on his roster, Lasers head coach John-Laffnie de Jager played Rik de Voest instead. In ATP matches, de Voest owned a 5-0 record against Reynolds. But with a championship on the line at Kastles Stadium, Reynolds rose to the occasion for a 5-1 victory. After adding a 5-2 win in men’s doubles, Reynolds was named the Mylan WTT Finals MVP.

Kastles fans didn’t know it as he flattened forehands against Frank Dancevic, but Reynolds was playing his last match at Kastles Stadium. The Kastles closer couldn’t have dreamed up a better singles performance, sweeping the first 10 points with punishing groundstrokes. When Dancevic raised his level, Reynolds employed the perfect tactic, attacking his backhand for a 5-3 win. After serving out the match in doubles, Reynolds fought back tears as he addressed his fans.