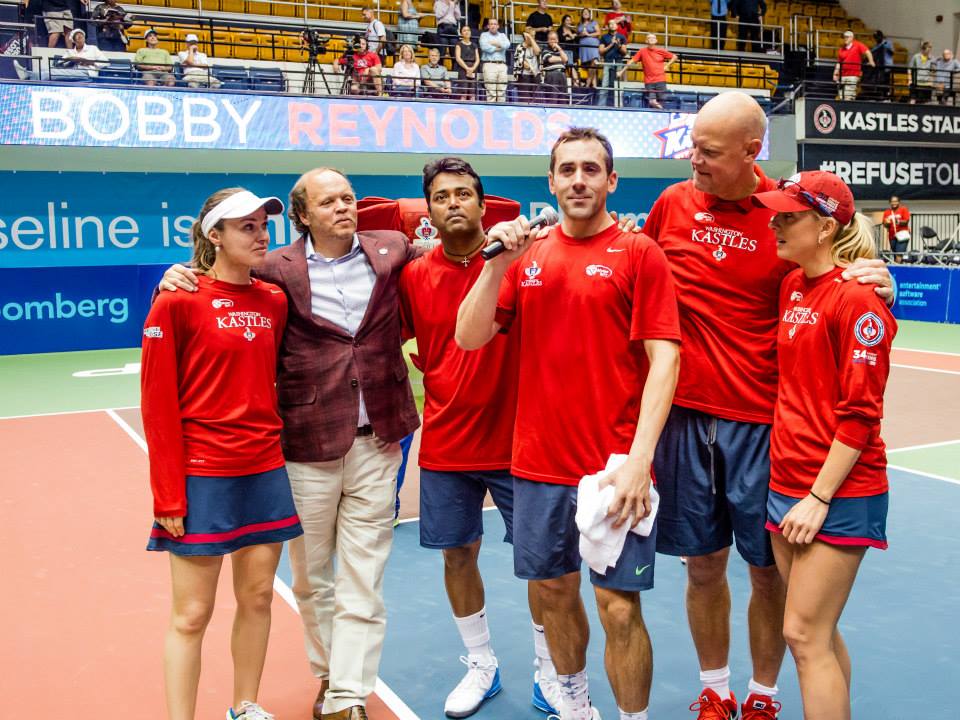 The Washington Kastles capped their first season at the Smith Center with a championship by defeating the Philadelphia Freedoms 21-16 on Thursday for their fourth straight Eastern Conference title.

The Kastles will play for a four-peat of Mylan World TeamTennis titles on the road Sunday against the Western Conference Champion Springfield Lasers — a rematch of the 2009 and 2013 WTT Finals won by Washington.

After serving the match out in overtime, Kastles closer Bobby Reynolds announced that Sunday’s Mylan WTT Finals would be his last match as a professional tennis player.

Reynolds was named WTT Male Rookie of the Year in 2010, WTT Male MVP in 2012 and WTT Finals MVP in 2013, helping Washington capture the King Trophy in each of the last three seasons.

The 32-year-old American was also the only Kastles player to compete in all 34 matches during Washington’s record-setting win streak from July 5, 2011 through July 10, 2013.

“These past five years have hands down been the greatest five years of my life,” Reynolds said as he addressed Kastles fans. “This was my Center Court.”

The Freedoms took an 8-7 lead after Taylor Townsend picked up her first win in four tries against Martina Hingis 5-2.

With his team needing a spark, Kastles captain Leander Paes provided energy, instincts and amazing volleys in his and Hingis’ 5-2 victory over Marcelo Melo and Liezel Huber.

Washington led 12-10 at halftime before Hingis and Anastasia Rodionova took on Huber and Townsend. In the opening game, Townsend unintentionally hit her partner in the back of the head with a crosscourt forehand.

After playing five more points, Huber was unable to continue, forcing Townsend into a 1-on-2 situation permitted by Mylan WTT rules. The 18-year-old American fought valiantly before losing 5-1, earning a standing ovation from the Smith Center crowd.

In men’s doubles, Melo and Dancevic defeated Reynolds and Paes 5-3, cutting the Kastles’ lead to 20-16.

Needing to win only one of four games in overtime, Reynolds served the match out immediately. He was honored on-court afterward with a framed jersey as a tribute to his brilliant five-year career with the Kastles.

Washington will travel to Springfield for the Mylan WTT Finals, which airs live Sunday at 5 pm on before being joined in progress at 6 pm on ESPN2.

After splitting four regular-season matches, it was clear from the first serve that the Kastles’ fifth battle against the Freedoms would be their most intense.

Reynolds nailed two service winners, an ace and a crisp crosscourt forehand pass to win the opening game of men’s singles and send a message to Dancevic.

Dictating with his forehand and attacking Dancevic’s one-handed backhand, Reynolds broke at love for 2-0 following winners from the back and front court.

But Dancevic didn’t back down from a fight. Following a timeout by Philadelphia coach Josh Cohen, the Canadian worked his way to a 3-all deciding point, which he won when Reynolds couldn’t put a volley away, allowing Dancevic an easy forehand winner into the open court.

When Dancevic won another 3-all point to even the set at 2-2, he screamed to the rafters, “Come on!”

It was on, indeed, as Reynolds regained momentum with forehand, backhand and overhead winners to hold for 3-2. Dancevic answered with a love service hold of his own for 3-3.

With Reynolds attacking Dancevic’s backhand on every point in the seventh game, the set was on the line.

On three occasions Dancevic timed his one-hander well and hit a winner. But on the other four points in the game, Reynolds approached the net off of Dancevic’s backhand successfully.

With a 4-3 lead, the Kastles closer continued to focus his attention on Dancevic’s weaker wing, drawing a backhand error that gave him two set points. Reynolds took the first when Dancevic netted a forehand after running around his backhand.

Washington appeared capable of extending its 5-3 lead when Hingis took on Townsend in the second set.

She started strongly again, hitting three winners and an ace to hold serve in the first game of the set.

But the Hall-of-Famer opened the door for Townsend by playing passively for a large stretch of the set, settling into baseline rallies when she would normally step inside the court and seek opportunities to attack the net.

Townsend held for 1-1, broke for 2-1 with a big crosscourt backhand that Hingis couldn’t handle, then held for 3-1 by saving four consecutive break points.

Hingis looked poised for a rally when she won all four of her service points for 2-3, then pushed Townsend to a 3-all deciding point on the lefty’s serve.

Townsend took the initiative in the most pivotal rally of the set, hitting three consecutive crosscourt forehands — each closer to the line than the last — until the third landed for a winner.

Hingis played more offensively after falling behind 4-2, approaching the net twice for volley winners. But when another 3-all point was needed to decide the seventh game, Hingis mistimed a backhand into the middle of the net off a Townsend slice.

Just like that Townsend had erased her demons against Hingis with a 5-2 win and given the Freedoms an 8-7 lead overall.

With the Kastles trailing for the first time in the match, the team’s captain Paes took matters into his own magical hands.

Paes held at love to begin the mixed doubles set, then followed Hingis’ topspin lob winner over Huber with one of his own in the second game.

Though Melo made it 1-1, Paes had already helped Hingis out of her singles funk. The Swiss held for 2-1 on a 3-all deciding point when Paes slam-dunked a backhand overhead out of Huber’s reach.

Paes added a pair of volley winners in the fourth game to help the Kastles break Huber’s serve. He screamed “Vamos! Let’s go Kastles,” after Huber missed a forehand long on break point.

After holds by Paes and Melo, Hingis faced another 3-all point on her serve with Washington leading the set 4-2.

Had she failed to convert, Hingis would have been reminded of Wednesday’s regular-season finale — when Philadelphia broke her twice in mixed doubles to rally from five games down and win in a Supertiebreaker.

Instead, Hingis unloaded on a strong serve down the tee, drawing a lob error from Huber and giving Washington a 12-10 lead going into halftime.

Hingis and Rodionova entered women’s doubles with a 3-0 record this season against Huber and Townsend. But being 3-0 against an opponent hadn’t helped Hingis in singles.

With a 3-0 lead on her serve in the opening game, Townsend attempted a sharply-angled crosscourt forehand. Her shot, however, hit an unsuspecting Huber in the back of the head.

The former World No. 1 Huber was shaken up but able to continue for five more points — Townsend holding for 1-0 and Rodionova taking a 2-1 lead on her serve in the second game.

Suddenly, Huber held her right hand up as if to call timeout. She sat down on the Freedoms’ bench and never returned to action, tears rolling down her eyes as she decided not to continue.

It was a familiar scene for Kastles fans who attended Washington’s match against the Freedoms on July 22, 2013.

During warm-ups on that night, Huber was hit in the head by a serve from her former teammate Sam Groth. She played seven games of women’s doubles before showing ill effects — her partner Sachia Vickery playing the final game by herself.

For Townsend, the challenge was even tougher.

She played five games of 1-on-2 against Hingis and Rodionova — the top-rated women’s doubles team in WTT. When the Kastles served, Townsend was helpless, conceding every point on the deuce court that required Huber’s return.

But the teen still had a chance to win her own service game, which could have been crucial for her team entering the final set.

Down 3-1, Townsend held her own and forced a 3-all point with a breathtaking backhand winner from one extreme angle of the court to another.

Though Townsend double-faulted on deciding point and Rodionova served out the set with ease, the Freedoms’ star received a standing ovation from the otherwise pro-Kastles crowd in appreciation of her great effort.

An otherwise close match turned quickly in the Kastles favor as they led 17-11 going into the men’s doubles finale.

As he did in singles, Reynolds started doubles with fiery emotion, knowing that it would be his final set at Kastles Stadium.

The Kastles closer held for 1-0 with an impressive inside-out forehand winner, bringing the Washington’s rabid fan base to its feet. Paes, however, was broken in his first service game when Dancevic hit a clean return winner.

The Kastles’ best chance to break back came with Dancevic serving at 3-2 in the set and 2-2 in the game. But the Canadian came up clutch with a series of reflex volleys, then Melo put one of his own volleys away to give the Freedoms a 4-2 lead.

Melo, the 2014 WTT Male MVP, went on to serve the set out, but not before what must have been one of the hardest-hit shots of Reynolds’ career: a laser-like forehand return that Dancevic was helpless to block at the net.

The Freedoms won the final set 5-3, but the Kastles still led 20-16 overall, giving Paes and Reynolds four chances to win one game in overtime. As he’s done so often over the last five seasons, the Kastles closer Reynolds served out the victory.

Washington advances to meet Springfield for the third time in the Kastles’ five WTT Finals appearances. The Kastles saved three championship points to stun the Lasers in 2009, then swept all five sets from Springfield in 2013.