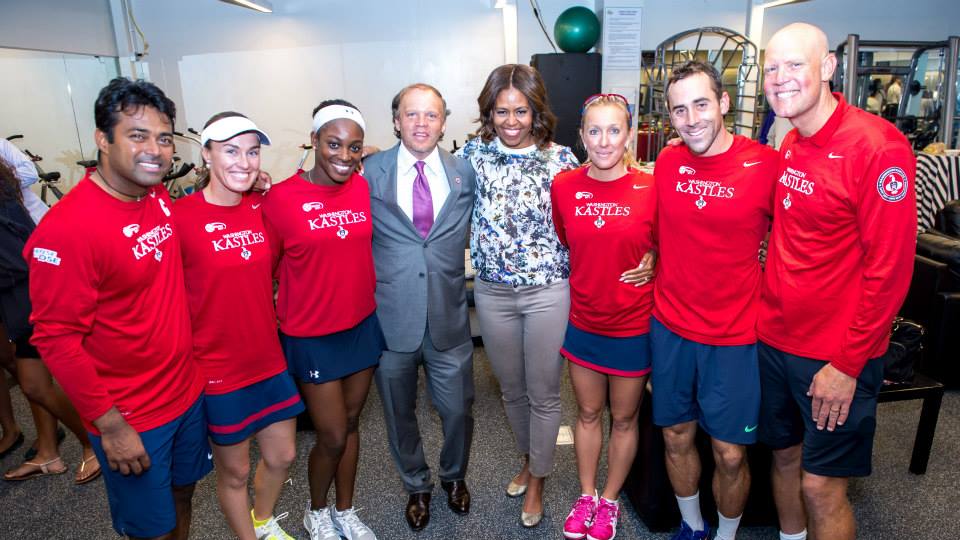 The Washington Kastles’ quest for a fourth straight Mylan World TeamTennis Championship will go through the Smith Center.

Sloane Stephens made a successful Kastles debut, winning women’s singles 5-2 to lead Washington to a 23-15 victory over the Springfield Lasers.

With their 10th win of the season, the Kastles (10-3) have clinched home court advantage for their Eastern Conference Championship match against the Philadelphia Freedoms on Thursday.

Should the Kastles defeat the Freedoms, they will advance to the Mylan WTT Finals on Sunday, which will be hosted by the Western Conference Champions.

Nearly 3,300 fans sold out the Smith Center on Tuesday to witness the Kastles clinch, including Michelle, Malia and Sasha Obama. With energetic Kastles fans filling every seat from the Celebrity Cruises VIP Dinner Tables to the Grandstands, Washington’s win over Springfield was a match to remember.

Back at a Kastles match for the fourth straight season, the First Family has seen the Kastles go 4-0 and defeat their opponents by an average of 10 games.

After the Lasers won the opening set of men’s singles 5-3, Stephens provided fireworks with her powerful forehand and blazing speed to defeat Olga Govortsova and give the Kastles an 8-7 lead.

The Kastles continue to compete with the 9-4 San Diego Aviators of the Western Conference for the best overall record in the league. The Western Conference Champions will host the Mylan WTT Finals on Sunday at 5 pm, but the order of play will be determined by the coach of the team with the better record.

With a win over Philadelphia tonight, or an Aviators loss to the Austin Aces, the Kastles will have a strategic edge should they meet San Diego on Sunday.

When Reynolds and Michael Russell met in Springfield on July 18, the Laser swept three 3-all deciding points to take the set 5-1.

He started the stronger player again in Tuesday’s first set, jumping out to a 3-1 lead as Reynolds struggled to find the range on his groundstrokes.

But after the players changed ends, Reynolds fought back by holding at love and breaking on a 3-all point with a lunging down-the-line backhand winner.

Reynolds belted out, “Yeah,” as the capacity crowd roared for his fantastic shot.

However, Russell returned the favor with a passing shot winner of his own to reclaim the break for 4-3. He served the set out in the following game by prevailing in a forehand-to-forehand duel with the Kastles closer.

With her team trailing 5-3, Stephens took to the court for her first WTT action since she was a 16-year-old rookie with the New York Buzz.

Coach Murphy Jensen needed a win when he normally would turn to Hingis in singles. Stephens proved more than capable in her place, looking completely comfortable in front of an arena packed with screaming supporters.

The 21-year-old American saved three break points in her first service game, holding behind a powerful ace down the service tee.

Govortsova dug deep in the early stages as well, fighting off five break points in her first two service games to stay even with Stephens at 2-2.

However, the Belarusian could only bend so long before she was broke.

Stephens earned two more break points in the fifth game with a ferocious forehand winner off of a Govortsova overhead. Though Govortsova saved the first, the newest Kastle converted on a 3-all deciding point when the Laser misfired on a forehand.

Another 3-all point was needed in the next game as Stephens served to consolidate her 3-2 lead. Govortsova took the offensive with an aggressive forehand, but Stephens stretched to retrieve the shot — her forehand slice putting Govortsova in an uncomfortable position and forcing an error.

On the heels of her big hold, Stephens continued rolling, breaking Govortsova once again to take the set 5-2, give Washington an 8-7 lead, and draw a standing ovation from the enthusiastic Smith Center audience.

In the men’s doubles third set, Reynolds and Paes appeared poised to break the match open against Russell and Fritz Wolmarans.

With the Springfield men staying behind the baseline in all of the Kastles’ service games, Reynolds and Paes dominated from the net and held with ease.

But when Russell and Wolmarans served, Springfield scrapped out of sticky situations to match the Kastles game for game. The Lasers rallied from 0-2 deficits at 2-3 and 3-4 to send the third set into a tiebreaker.

Reynolds, Wolmarans and Paes each won a point and lost a point on serve to start the tiebreaker, leaving Russell with the final three service points at 3-3. The American veteran won the first when Paes missed a forehand, then lost the second when Reynolds hit a deep return to draw an error.

Now serving on the 4-4 winner-take-all point of the tiebreaker, Russell retrieved a great return by Reynolds before Paes provided more of his magic at the net, knifing an inside-out backhand volley just inside the sideline to seal the set for Washington.

The Kastles captain and closer came together with a passionate celebration, knowing that had they lost the do-or-die point in the tiebreaker, Springfield would have tied the match at 12-12 going to halftime.

Instead, Washington led 13-11 when Stephens and Hingis started the fourth set of women’s doubles.

Looking like a natural in her Kastles long-sleeve jersey, Stephens plowed a return with too much pace for Abigail Spears to handle, breaking the Lasers on a 3-all point in the opening game.

Springfield got the break back on Stephens’ serve when a Govortsova return was called good on the baseline, much to the dismay of Jensen.

The Kastles coach argued vehemently with umpire Susan Burns to no avail. Jensen then substituted Stephens with Rodionova in an effort to keep the core Kastles’ chemistry going into the playoffs.

With Stephens cheering her teammates on, Hingis broke for 2-1 with a backhand winner between Govortsova and Spears.

After Hingis held for 3-1, the Kastles won the point of the set: Rodionova pushing Govortsova back with a lob, then crushing an overhead that Spears swung and missed at. But Govortsova had her partner’s back and reached the ball behind her. Hingis, however, was not fooled by the misdirection and put the next shot away for a winner.

Despite losing that point, Govortsova held for 2-3 by winning an entertaining 3-all rally. The Kastles countered with four put-away volleys to take a 4-2 lead. Washington secured the set 5-2 when Hingis angled Spears off the court with a strong return, allowing Rodionova to cut across the middle of the court and hit an easy volley winner.

Hingis and Paes were nearly perfect on serve, winning 16 of 18 points to prevent Spears and Wolmarans from establishing any rhythm.

Though Wolmarans went 8 of 9 on serve himself, Spears proved to be the weak link. The Kastles broke the World No. 13 women’s doubles player in the fourth game when Hingis hit a forehand volley that bounced off of Wolmarans’ racquet and into his face.

One break was all Washington needed. Moving their opponents all over the court throughout the set, Paes and Hingis showed why they are tennis geniuses individually, and even more incredible as a team.

When Hingis served for the match at 4-2, Paes was back to his old tricks, hitting a drop volley that sent Wolmarans scrambling, then another in the opposite direction that prompted Spears to chuck her Head racquet across the court.

That gave the Kastles match point, which they converted when Hingis hit another volley that Wolmarans couldn’t handle.