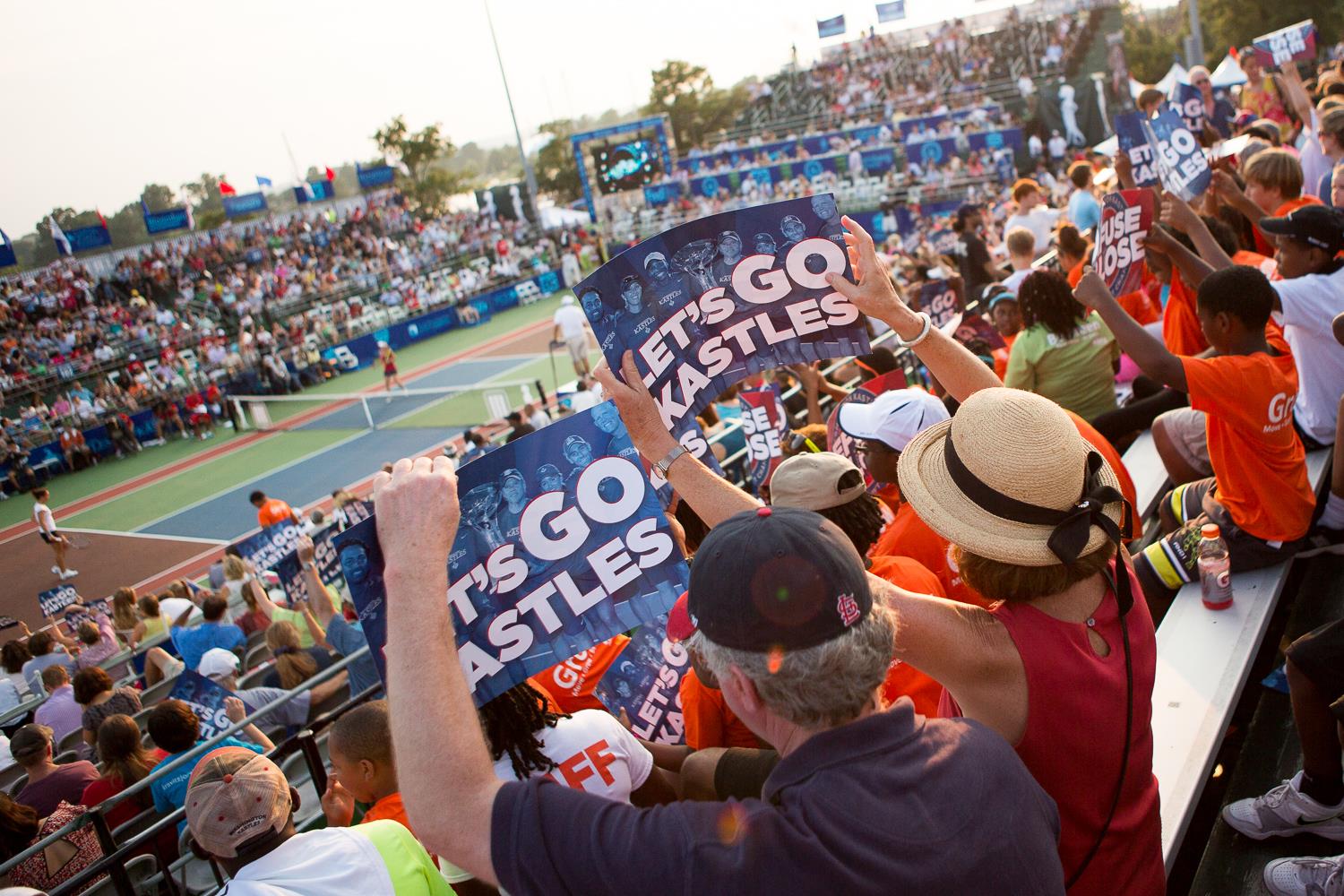 In their quest for a fourth straight Mylan World TeamTennis championship, the Washington Kastles are moving indoors to Kastles Stadium at the Charles E. Smith Center, located on the corner of 22nd and G Streets NW in Foggy Bottom.

Kastles fans can anticipate an electric atmosphere in and around the state-of-the-art Smith Center, which completed a $43 million renovation in 2011.

With their new facility, the Kastles will offer a wide range of new fan features, including high-definition instant replays visible throughout the arena, animated baseline scoreboards, luxurious hospitality areas and 700 additional seats. Stilt walker Leighton Condell and the Kastles Cheerleaders are also returning to entertain the crowd.

Almost all Kastles matches in recent years have sold out, and the 2014 season should be no different. The Kastles will present some of the most unique premium-seating options in D.C. sports, including VIP Dream Seat Dinner Tables, Premier Courtside Boxes, the Kastles Baseline Experience and the Kastles Baseline Club.

New in 2014, the Kastles Baseline Experience is an exclusive section where fans will sit directly behind the court and on the same level as the playing surface for a view unlike any other in professional tennis. Kastles Baseline Club seats overlook all the action from only 12 feet above the court, letting fans make eye contact with players between every point.

The Kastles come to Foggy Bottom after three seasons on the Southwest Waterfront, where Washington sold out virtually all of its home matches. Team owner Mark Ein expects to fill the 3,212 seats inside Kastles Stadium at the Smith Center as well.

“We consistently strive to create some of the greatest fan experiences in all of tennis and are thrilled to play for our fourth straight WTT championship in this state-of-the-art facility,” said Ein. “I know our Kastles fans will love not only the comfort and new amenities at the Smith Center, but also the incredible intensity, energy and excitement they will find this summer in our new home.”

The Kastles will add another legend to that list in Martina Hingis. During a 19-day span last July, Hingis entered the International Tennis Hall of Fame, helped the Kastles capture the King Trophy and began a comeback on the WTA Tour.

Hingis and fellow former World No. 1 Venus Williams will become teammates for one night only on July 16. The lifelong rivals are expected to play doubles together for the first time when Washington hosts the Texas Wild.

Three-time WTT Coach of the Year Murphy Jensen returns to lead the Kastles, who are hoping to tie the 1997-2000 Sacramento Capitals for the longest title run in WTT’s 39-year history.

When the Kastles make their Foggy Bottom debut against the Boston Lobsters on July 9, they will bring one of the greatest home-court advantages in sports. Washington is 24-1 at home since losing to the Lobsters at CityCenterDC on July 18, 2010.

“The George Washington University and the Charles E. Smith Center have hosted some of the world’s foremost experts, leaders and luminaries in a multitude of professions, including politics, arts, sports and entertainment,” said GW Director of Athletics and Recreation Patrick Nero. “With the Washington Kastles set to play their professional team tennis season at the Smith Center this summer, we are adding to that proud history.”

The Smith Center is located at 600 22nd Street NW, three blocks from the Foggy Bottom-GWU stop on Metrorail’s blue and orange lines. Parking is available for $10 on weeknights and $12 on weekends at four GW parking garages located within three blocks of the Smith Center.