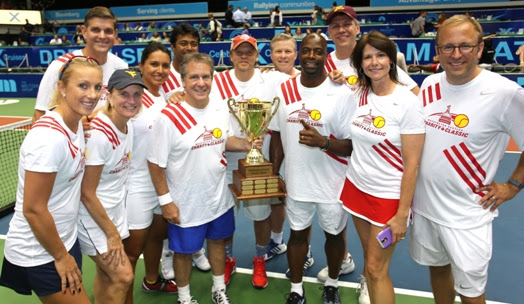 Tennis, football, media and Congress converged at the Smith Center for the closest match in the three-year history of the Washington Kastles Charity Classic.

Though they trailed by four points entering the eighth and final tiebreaker, Team Stripes made like the Kastles and refused to lose, rallying behind Charity Classic MVP Charlie Dent (R-PA) to defeat Team Stars by the narrowest of margins 47-46.

As close as both teams came to capturing the Kastles Cup, the biggest winners on Tuesday were Best Buddies, Tragedy Assistance Program for Survivors (TAPS), DC Public Education Fund and Food & Friends. The four fantastic charities split 100% of the ticket sales in addition to extra donations made by Charity Classic sponsors.

From the start, the Stripes were playing catch-up against the Stars, who opened the match with a 7-2 win by John Breaux and Jim Costa over Tim Bishop and Cheri Bustos.

A tightly-contested second tiebreaker between political broadcasters came down to a sudden death 6-6 point. In the end, a service winner by Bloomberg Television’s Peter Cook allowed him and ABC News’ Jon Karl (Stripes) to beat the Fox News pairing of Bret Baier and Ed Henry (Stars) 7-6. 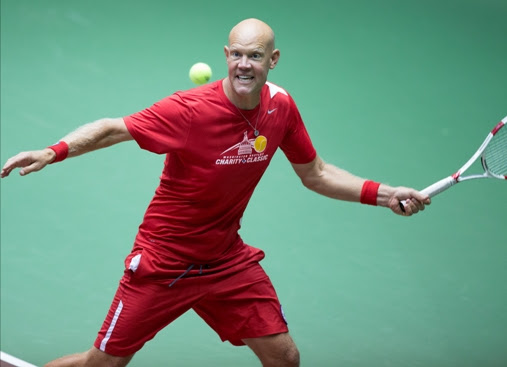 Jensen had a flair for the dramatic, starting the tiebreaker with a lob winner that sent Ein barreling into Kastles cameraman Todd Burger. Then, with his team up 6-4, Jensen told Sperling that he was going to hit his return down the line, which is exactly what he did, passing the ex-White House economist to clinch the tiebreaker.

With the Stars ahead 20-13, the Stripes slowly chipped away at their opponents’ lead.

The Stripes won the next three tiebreakers to tie the match at 34-34, with victories from the teams of Erik Paulsen and Tulsi Gabbard, Leander Paes and Anastasia Rodionova, and Darrell Green and Peter Cook. 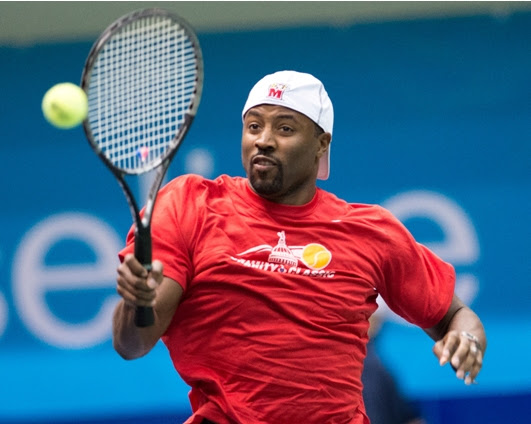 What Josh Wilson lacked in technique, he more than made up for in entertainment. (Photo by Rich Kessler)

Green and Rocky McIntosh were on opposite sides of the court just as they were during the 2012 Charity Classic. The former Redskins linebacker McIntosh showed off a much-improved serve, which he often had to hit while Green taunted him by screaming “Into the net!”

McIntosh’s partner, current Atlanta Falcon Josh Wilson, had plenty of personality too. He celebrated a volley winner by roaring as if he were the Kastles captain Paes, then chest-bumped McIntosh as if he were Bobby Reynolds.

The set ended comically as Green attempted to hit a volley off a McIntosh return. The legendary cornerback swung and missed, but was let off the hook when McIntosh’s shot landed long.

With only two tiebreakers remaining, the Stars recovered their lead when a pair of Virginia Congressmen crossed party lines. Republican Bob Goodlatte and Democrat Bobby Scott overcame a strong effort from Shelley Moore Capito to defeat the West Virginia Congresswoman and John Delaney, a Maryland Congressman, 7-3. 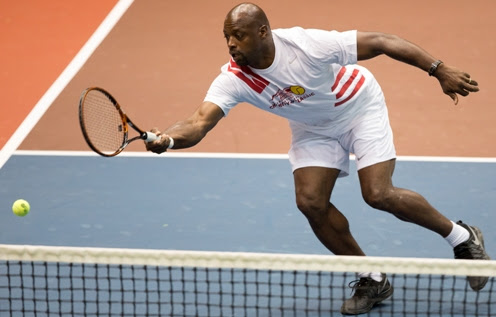 That gave the Stars a 41-37 advantage and set for the stage for Dent’s heroics. Appearing off of the Stripes’ bench for the first time all night, the left-handed Congressman from Pennsylvania hit a remarkable return to give his team a 2-1 lead in a Supertiebreaker filled with substitutions.

After contributions from his teammates Sperling and Paulsen, Dent was subbed back in and hit a service winner to make the first-to-10 finale 8-4 and tie the overall match score at 45-45.

The waning moments pitted Dent and Karl against Breaux and Baier. After a solid return by Breaux, then a strong forehand by Dent, the Stripes tied the overall match score at 46-46 and led 9-5 in the Supertiebreaker.

The Stripes were on the brink of winning the match, but they had to do it on that very point or else Team Stars would have at the very least forced overtime.

One point was all the Stripes needed as Dent poached off of a ball from Baier and hit a backhand volley between both of the Stars for a winner.

Dent was one of five competitors who repeated as Charity Classic champions. Karl, Cook, Ein and Moore Capito also played on the Stripes team that won the 2013 Kastles Cup. 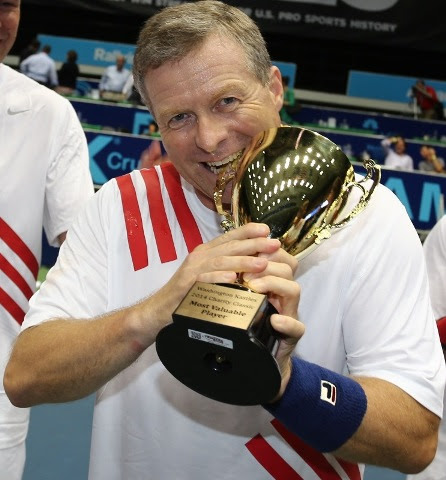 Charlie Dent came from out of nowhere to earn MVP honors. (Photo by Kevin Koski)