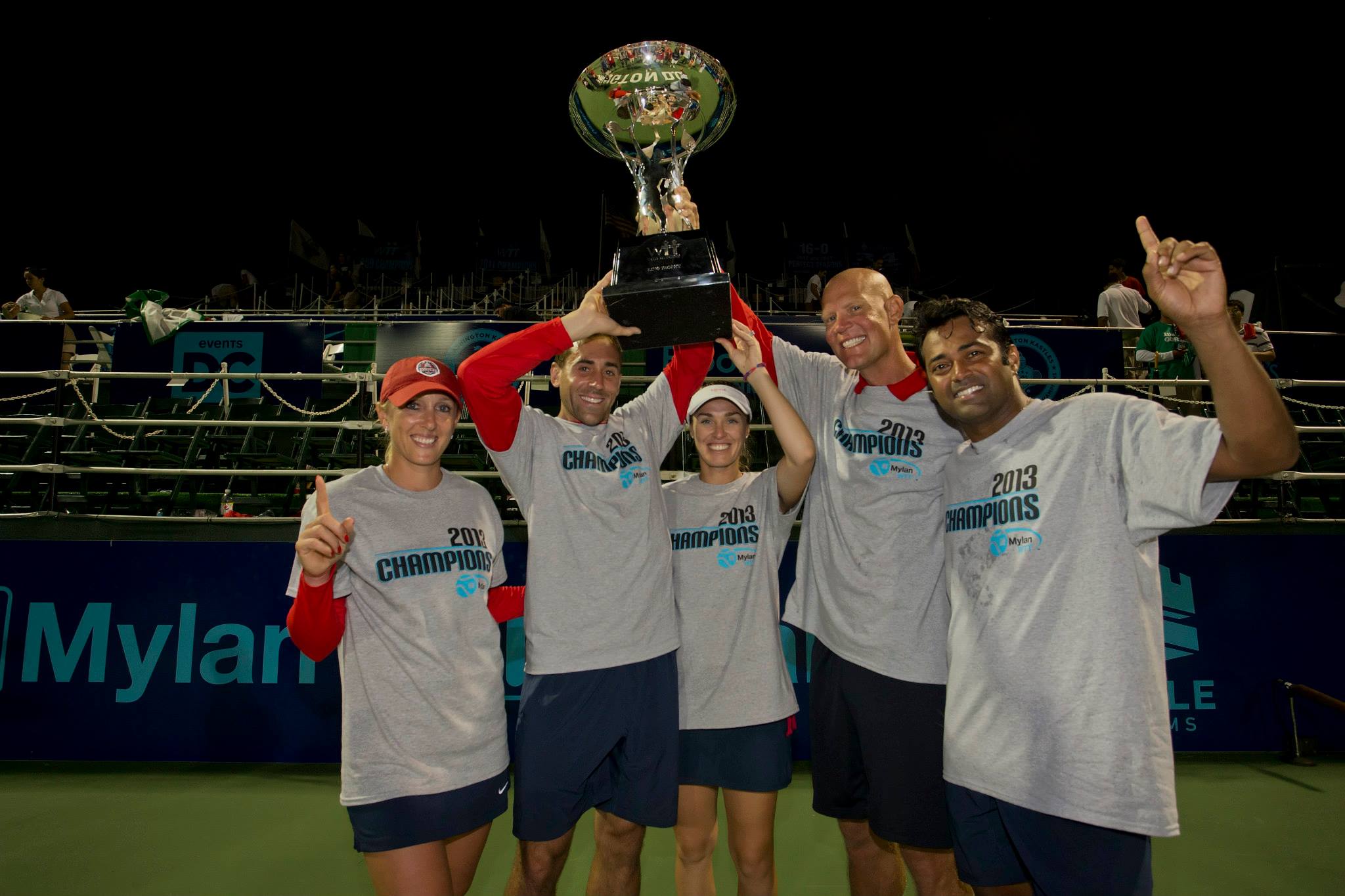 The Washington Kastles completed their third consecutive championship run on Sunday, sweeping all five sets of the Mylan WTT Finals to defeat the Springfield Lasers 25-12 in front of an overflow capacity crowd of 2,670 fans at Kastles Stadium.

Winners of their last 12 matches, the Kastles (14-2) never trailed the Lasers (10-6) en route to their fourth league championship in the last five years. Washington becomes the first team to win every set in the Mylan WTT Finals since the championship match switched to a five-sets-to-five-games format in 1999.

The Kastles are now 46-2 since 2011, including a 34-match win streak that surpassed the previous major U.S. pro sports record.

“It’s been an unforgettable season for our franchise,” said Kastles owner Mark Ein. “We broke a 41-year-old winning streak record to start it off, then captured our fourth King Trophy to finish it. Our results on and off the court continue to amaze me and inspire our players, and we are all already looking forward to 2014.”

One of Washington’s two losses this season came at the hands of the Lasers, who defeated the Kastles 22-15 on July 11 at their home venue on the Southwest Waterfront.

But the Kastles were without 2013 Mylan WTT Female MVP Martina Hingis on that night, and her presence in the Finals overshadowed that of Springfield superstar Andy Roddick. Lasers coach John-Laffnie de Jager chose to start Rik de Voest, instead of Roddick, in men’s singles and doubles.

In women’s play, Hingis won singles 5-2, doubles 5-3 with Anastasia Rodionova, and mixed doubles 5-4 with Paes. The Kastles captain Paes, who has been with Washington since its first title run in 2009, clinched the Kastles’ latest championship by hitting a forehand return past Roddick at the net.

Paes’ winner on championship point capped another historic campaign for the Kastles, who finished both the 2011 and 2012 seasons with a 16-0 record.

Before their season opener on July 8, the Kastles entered the record books as the first reigning Mylan WTT champions to be invited to the White House for a meeting with the President of the United States. Hours after President Barack Obama honored them in the Oval Office, the Kastles defeated the New York Sportimes in front of a capacity crowd that included his wife, First Lady Michelle Obama.

Then, on July 9, Washington beat the Boston Lobsters to break the 33-game win streak record set by the 1971-72 Los Angeles Lakers.

The Kastles’ presence in the DC community was also recognized on July 24 when Congressmen Jim Costa, Charlie Dent, Mike McIntyre and Tim Bishop paid tribute to the team in the middle of a session on the Floor of the House of Representatives.

Following their championship victory on Sunday, the Kastles players and their fans partied at Cantina Marina, where every member of the team agreed to return in 2014 and play for a four-peat.

You won’t have to wait until next summer to enjoy seeing Paes, Hingis, Reynolds and Rodionova in action. Tune in to Tennis Channel tonight at 8 pm for a replay of the Mylan WTT Finals.

A sold-out crowd waited out a two-hour rain delay, and the fans were rewarded with a championship match that won’t soon be forgotten.

Intrigue surrounded Sunday’s final from the start as de Jager opted for de Voest in singles over the former World No. 1 Roddick.

While Roddick and Reynolds have never met, de Voest entered with a 5-0 record against the Kastles closer on the ATP Tour and a 1-1 mark in WTT play. But the one Reynolds win was a big one, 5-1 to start Washington’s 21-15 win over Springfield on July 17.

Immediately it became clear that Reynolds carried confidence from that victory into the first set of the Mylan WTT Finals. He held with back-to-back unreturnable serves, yelling “YEAH!” as the capacity Kastles crowd roared along.

Reynolds had a huge opportunity to take a 2-0 lead with four break points in de Voest’s first service game. Though the South African held, Reynolds did not get discouraged by missing out on those broke points, and would take full advantage of his chances moving forward.

After holding for 2-1, Reynolds converted a 3-all deciding point when de Voest missed a timid forehand into the net.

Reynolds followed with two straight winners for a 4-1 lead, then found himself at a third 3-all point on de Voest’s serve. With nearly 2,700 fans letting their voices be heard to de Voest, he buckled and missed a first-ball forehand wide to concede the set to Reynolds.

Washington had lost the women’s doubles set in both of its regular season matches against Springfield.

But after winning six of their previous seven sets coming into the Mylan WTT Finals, Hingis and Rodionova saved their best for last.

Rodionova in particular was spectacular from the outset, hitting a picturesque lob over both Lasers en route to holding for 1-1.

The Lasers’ dodged early trouble in the next game. Facing a 3-all point, Vania King served to Hingis, who handcuffed Mylan WTT Female Rookie of the Year Alisa Kleybanova at the net with a blistering return. The Russian ducked and fell to the court, but somehow still made contact with her racquet on the ball, which dribbled off the net cord and over for a winner.

Luck would change sides a few games later, with Rodionova serving on a 3-all point at 2-3. The Lasers protested that Rodionova’s first serve was long, but no call was made and King’s return landed out, allowing Washington to even the set at 3-3.

From there, Rodionova took complete control, breaking King with a down-the-line forehand return winner past Kleybanova, then hitting three volley winners to help Hingis serve out a set that the Kastles were not favored to win.

Momentum in the match could have changed in the first game of men’s doubles when de Voest and Rojer earned a break point on Reynolds’ serve.

On a 3-all deciding point to begin the set, Rojer had a good look at a potential put-away, but the Lasers’ doubles star hung his shot up high to allow Paes an easy volley winner.

After Reynolds held serve, so did Rojer, Paes and de Voest, before an amazing rally of cat-and-mouse emerged between Paes and Rojer at 2-2.

Both doubles stars scurried from side to side to cut balls off at the net while their partners tried to keep pace at the baseline. Eventually, the ball worked its way back to Reynolds, who hit a flat, down-the-line backhand to draw an error from de Voest and hold for 3-2.

In the next service game, the Kastles earned an elusive break point on Rojer’s serve. Washington had failed to break Rojer in two matches during the regular season. But Reynolds unloaded on a forehand return that de Voest could not control at the net, prompting the Kastles closer to chest bump his four-year teammate Paes.

Now down a break, the Lasers substituted Roddick in for de Voest, but it was too little, too late. Paes held with a service winner out wide to give Washington a 9-game halftime lead.

After King struggled in singles against Hingis during the regular season, Springfield sent out the big-hitting Kleybanova for a set that the Lasers had to win.

And for four points, the plan appeared to be working as Kleybanova bashed backhands from the back of the court to take a 3-1 lead in the opening game.

But the savvy Hingis moved beautifully throughout the championship match and withstood Kleybanova’s offense to rally for a service break to start the set.

Suddenly, Hingis was the more aggressive of the two players, hitting back-to-back backhand winners down the line before holding for 2-0. She followed suit with a second break after stepping inside the baseline to hit an inside-out forehand return winner.

Though Kleybanova won two games to reach 2-3, Hingis responded with a love hold for 4-2, then sealed the set for the Kastles with a combination that she’s perfected over the years.

First, the Swiss star hit an angled drop shot to force Kleybanova up to the net and off of the court. Then, she approached for a volley winner into the abandoned court.

Facing a 12-game deficit entering the final set, the Lasers would need the largest comeback in Mylan WTT history to clinch their first league title.

An electric Kastles Stadium crowd was treated to a highly entertaining final set of the season featuring former World No. 1s Hingis, Paes and Roddick.

Though the Lasers were down a dozen on the scoreboard, they fought as though they were the team that was one set from victory.

Paes needed to hit volley winners on 3-all points in both of the Kastles’ first two service games to give Washington a 2-1 lead. Springfield rebounded to even the set at 2-2 when Kleybanova hit a well-angled crosscourt forehand winner past Paes, drawing a loud outburst of approval from her teammate Roddick.

After sitting out much of the match, Roddick poured everything he had into the 34-minute final set. But Paes held for 3-2 and opened up an 0-3 lead on Roddick’s serve with a shot that brought the Kastles Stadium crowd onto its feet for a standing ovation.

All four players were near the net when Roddick rocketed a forehand crosscourt that appeared destined to be a winner. But Paes used his terrific touch and impeccable instincts to stick his racquet out just in time for a reflex volley winner down the line.

Facing quadruple break point, Roddick channeled the service speed that took him to No. 1 in the world in 2003. He hit an ace past Hingis and a service winner that was too strong for Paes, then followed another first serve with a vintage inside-out forehand that Hingis couldn’t catch up to.

At 3-all, however, he swung too hard at a forehand volley and missed well long, giving the Kastles a 4-2 lead in the set and affording Hingis the chance to serve for the championship.

No seats were occupied as fans stood tall in hopes of seeing history made. But they would have to wait two more games as Hingis was broken at love, then Kleybanova held to force a tiebreaker.

With Springfield leading 2-1 in the tiebreaker, Paes worked his magic at net again, coming up with a reflex lob volley that landed inside the baseline and forced Roddick into hitting a desperation lob. That set Paes up for an overhead put-away to even the tiebreaker at 2-2.

Hingis was given a chance for vindication as she served the next two points. She seized the opportunity, hitting an ace past Kleybanova and a service winner on Roddick.

With Washington holding a 4-2 lead and three championship points on Kleybanova’s serve, it took just one swing of Paes’ racquet to clinch another Kastles title.

Standing on top of the baseline in the deuce court, Paes stepped into a forehand return and blasted the ball past Roddick at the net for a clean down-the-line winner, jumping into Hingis’ arms to cap another unforgettable season of Washington Kastles tennis.