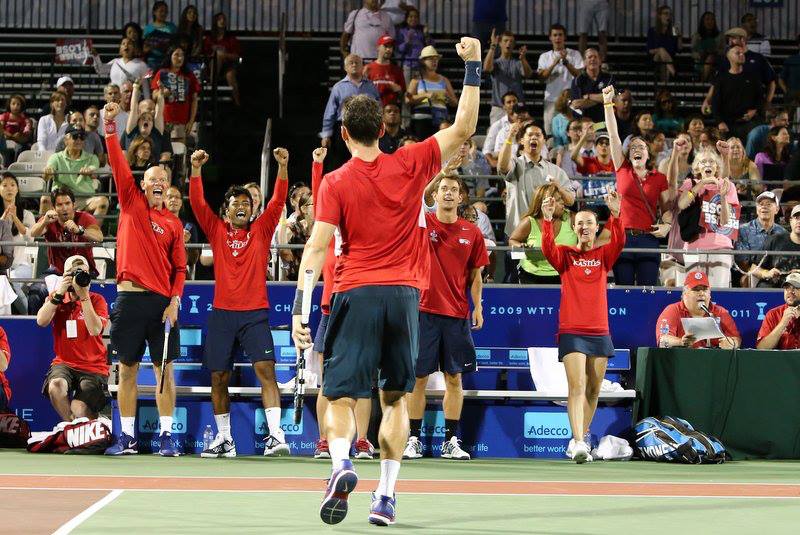 One night after beating the Boston Lobsters handily to end the regular season, the Kastles returned to the scene of the rout and treated their fans on the Southwest Waterfront to a case of déjà vu.

Washington (13-2) advanced to its third straight Mylan WTT Finals with a comprehensive 25-12 victory over the Lobsters on Thursday, having defeated Boston 25-9 on Wednesday.

The Kastles are now 7-0 all-time in postseason play, including championship runs in 2009, 2011 and 2012. Washington’s record over the last three seasons is a staggering 45-2 — one of the greatest runs in the history of professional sports. A three-peat on Sunday would only strengthen the Kastles’ dynasty.

Kastles Stadium at The Wharf will host the Mylan WTT Finals on Sunday at 5 pm. Washington’s opponent on Sunday will be a familiar one. The 10-5 Springfield Lasers emerged as the Western Conference champions after sweeping the Texas Wild 25-9 on Thursday.

During the regular season, Springfield paid two visits to Kastles Stadium at The Wharf. The Kastles were without Martina Hingis when Andy Roddick and the Lasers defeated them 22-15 on July 11. Six days later, the Lasers were without Roddick when Hingis and the Kastles rebounded for a 21-15 win over Springfield.

Following Springfield’s win over Texas, Lasers coach John-Laffnie de Jager announced that Roddick will return for Sunday’s showdown in DC. Hingis will be there for the Kastles as well, meaning that a former World No. 1 singles player will lead his or her team to the King Trophy.

Team captain Leander Paes kicked off the Eastern Conference Championship match with an ace, but before the first serve, two Kastles favorites were already winners.

During a pre-match ceremony, Coach Murphy Jensen was honored with his third straight WTT Coach of the Year award and Hingis earned her second consecutive WTT Female MVP honors.

Hingis made good on her recognition by winning mixed doubles with Paes 5-2, women’s doubles with Anastasia Rodionova 5-1, and then women’s singles over Jill Craybas 5-2.

In men’s play, Paes and Bobby Reynolds won men’s doubles 5-2, giving the Kastles the same 15-5 halftime lead that they enjoyed on Wednesday.

Though Reynolds fell 5-4 to Amir Weintraub in the final set, he swept the first four points of overtime to close the Kastles’ fourth Eastern Conference Championship.

So began a string of five consecutive service holds. After Paes gave Washington a 3-2 lead, the Kastles stole the first three points on Butorac’s serve with winners: a Paes volley, a Hingis down-the-line pass and a picturesque Paes lob.

With Hingis’ love hold that followed, Washington swept the final 12 points of the set to start the Eastern Conference Championship match with a win.

Hingis and Rodionova entered the Eastern Conference Championship match with a 4-0 record against Marosi and Craybas, so the Lobsters were always going to be up against it.

But Craybas held in the opening game, then Boston opened up an 0-2 lead on Rodionova’s serve.

That’s when Coach Jensen called a timeout to regroup his women’s doubles team.

It was perfect timing as Rodionova rallied to hold and the Kastles never lost another game.

From 1-1, Washington won three straight games on 3-all deciding points behind strong play from its Hall-of-Famer. The Kastles broke Marosi with a deep Hingis return, held on a Hingis service winner, then broke Craybas when Hingis hit a low forehand that forced a Craybas error.

Rodionova put the set away 5-1 on her serve when Hingis snapped a backhand volley winner, completing a perfect season in women’s doubles for Washington against Boston.

The two-time WTT Male MVP Paes proved to be the MVP of the men’s doubles set, serving as a menace at the net.

Early in the set he followed a vicious volley winner with a ferocious forehand winner, staring hard at the ball after each of the points as if it were his worst enemy.

After Paes held for 2-1, the Kastles broke Weintraub when the Israeli player hit a between-the-legs shot, only to turn around and see Paes put away a volley winner.

More magic from Paes at the net helped Reynolds hold for 4-1. After Eric Butorac made it 4-2, the Indian ended proceedings on his own serve when Reynolds put a volley away.

As was the case throughout the season, there was nothing that the 5-foot-3 Craybas could do to hurt Hingis in singles.

Hingis broke off the bat following an extremely long rally in which showed a little of every spin until Craybas lost her patience and missed a down-the-line backhand.

Before the American knew it, she was down 4-0 and Lobsters coach Bud Schultz was trying to score points for his player by pleading for foot fault calls on Hingis.

Craybas managed to get one break back, but it was just a momentary lapse in concentration for the league’s Female MVP. She wrapped up the set 5-2 when Craybas sprayed a forehand long.

During the 2012 postseason, Venus Williams was the Kastles closer. But in Thursday’s Eastern Conference Championship match, Reynolds returned to his usual role.

For a few moments, it looked like he would steamroll Weintraub in similar fashion to his 5-1 win on Wednesday.

Reynolds held at love with an ace out wide in the first game, and repeatedly won extended rallies with steadier play than the talented-yet-erratic Weintraub.

When the Lobster missed a slice backhand into the net, Reynolds had earned a 3-1 lead.

However, Weintraub broke right back in the following game, and the set stayed on serve until a tiebreaker was required to decide it.

The Lobster hit four unreturnable serves and benefited from a Reynolds double fault to steal the set in a tiebreak.

But after the players changed sides for the start of overtime, Reynolds relaxed and played four fantastic points.

After winning the first two on Weintraub’s serve, he directed a crosscourt backhand winner past the Lobster to earn quadruple match point.

On his first chance, Reynolds approached the net and anticipated a down-the-line pass by Weintraub, stretching his entire body for a crosscourt forehand volley winner.