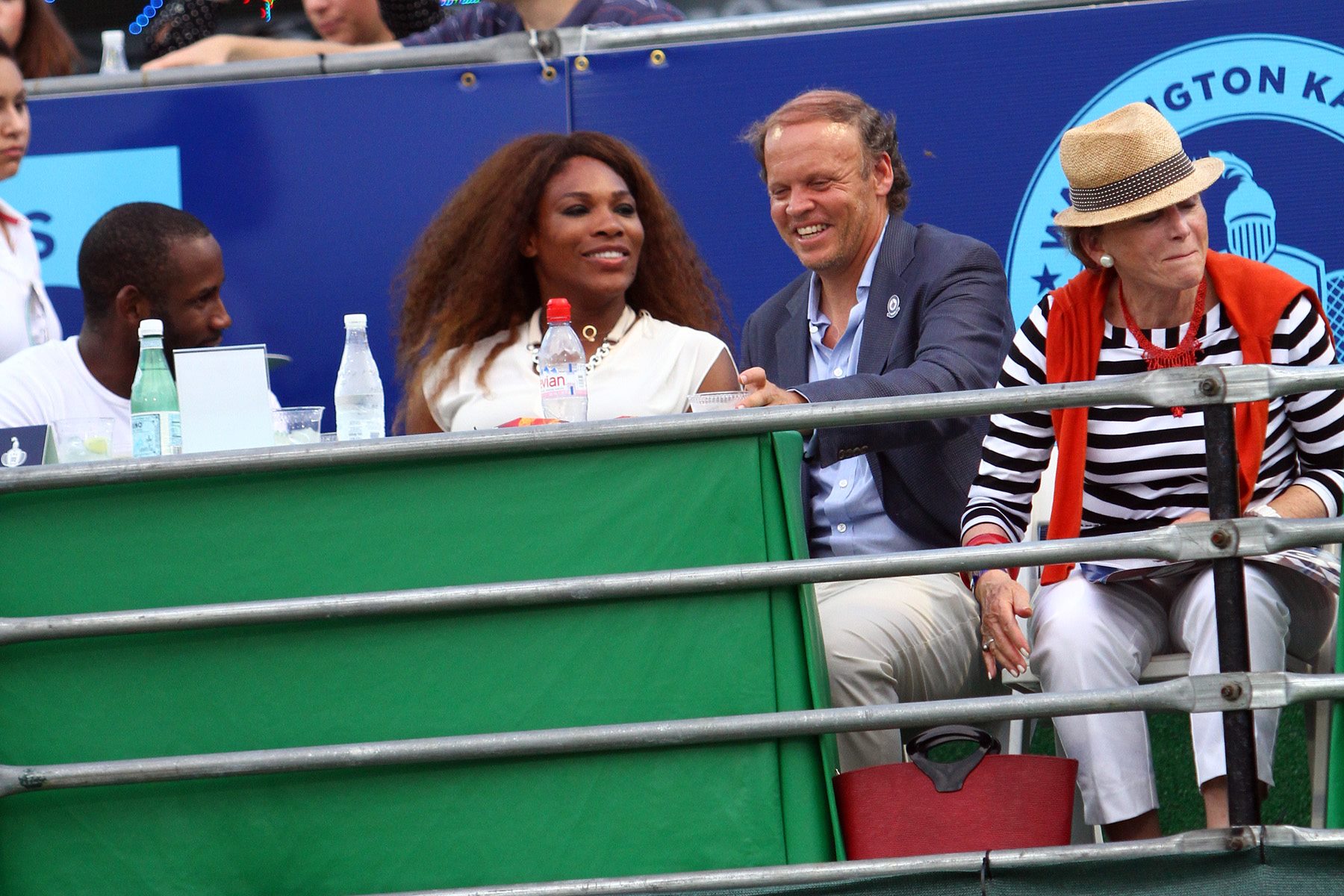 The Washington Kastles clinched home court advantage Sunday, but they were still in the winning mood Monday, earning their eighth straight victory of the season 23-13 over the Philadelphia Freedoms (4-8).

With Washington original player Serena Williams watching from the front row, the Kastles (10-2) extended their domination against other Eastern Conference teams. Washington has won 24 consecutive matches against the Freedoms, New York Sportimes and Boston Lobsters dating back to the 2010 WTT season.

Williams played in the very first match at the old Kastles Stadium in 2008, and she was on the 2009 and 2011 championship Kastles teams. Only one day after winning the Swedish Open to solidify her No. 1 ranking, she flew across the Atlantic to support her teammates, joining them for dinner after the match as well.

Kastles substitute Frederik Nielsen teamed with Anastasia Rodionova to win the first set of mixed doubles 5-3. Martina Hingis broke the match open in the second set when she won 20 of 23 points to defeat 18-year-old Sachia Vickery 5-0.

Before the third set of men’s doubles began, Freedoms player Liezel Huber was unintentionally struck in the face by a serve from her teammate Sam Groth while she was helping retrieve balls during the warm-up.

After Groth and Jordan Kerr won men’s doubles 5-3 for the Freedoms, Huber gave a valiant effort by playing the first seven games of the women’s doubles set.

But with Hingis and Rodionova leading 4-3, a visibly-affected Huber could not continue, and was later carted off the court on a stretcher. Per Mylan WTT rules, since Philadelphia did not have another women’s player, Vickery played 1-on-2 in the final game before Washington wrapped up the set 5-3.

Kastles closer Bobby Reynolds won the fifth set 5-2 over Groth, breaking the man who set a world record in 2012 with a 163 mile-per-hour serve.

Following their final two regular season matches, the Kastles will host the Eastern Conference Championship match on Thursday at 7 pm. If they win, the Kastles will play for a third consecutive Mylan World TeamTennis title in front of their home fans at Kastles Stadium at The Wharf this Sunday at 5 pm.

With one more win this season, or one loss by the 8-4 Springfield Lasers, the Kastles will clinch the best record in the league. That would give Coach Murphy Jensen the power to select the order of play in the Mylan WTT Finals on Sunday, should the Kastles win the Eastern Conference Championship on Thursday.

Jensen threw a curve ball at the Freedoms from the first serve, inserting Rodionova to play instead of the league’s No. 1-rated mixed doubles player Hingis. The Kastles coach wanted to rest Hingis after she played three sets in each of her previous eight matches for Washington. Rodionova rewarded her coach with a deep forehand volley for 1-0 and a crosscourt backhand return winner past Huber to break Kerr for 2-0. That’s about the time that Williams arrived at the stadium, creating a buzz in the intimate venue as everyone in attendance was close enough to see her.

Back on the court, the Freedoms recovered the break before Rodionova won a crucial 3-all point at 3-3 when she hit a serve off the net cord that Nielsen followed with a powerful volley winner. The Kastles substitute Nielsen owned the next game on Huber’s serve, plowing a pair of forehands to set up set point, which he clinched on a fantastic reflex lob volley that landed on the baseline and drew an error from Huber.

In women’s singles, Hingis found herself in a Teacher vs. Student match-up of sorts. Not so long ago, the Hall-of-Famer was training Vickery at the Mouratoglou Academy in France.

Besides the pressure of playing Hingis in her Mylan WTT season debut, the 18-year-old Vickery was also competing in front of her childhood hero. Vickery’s official website says: “I fell in love with tennis when I watched Serena Williams playing.”

A combination of her opponent, her debut and her idol all affected Vickery from the start.

She double-faulted twice in the first game, seemed timid on her strokes, and was unable to get anything going until unloading on a backhand winner when she was down quadruple set point at 0-4.

Hingis, on the other hand, played her typically-steady brand of tennis, moving Vickery from side to side and opening up the court for winners.

After 12 minutes of play, Vickery double-faulted for the fifth time, gifting the set to Hingis 5 games to 0 and 20 points to 3.

The Freedoms won men’s doubles 5-3, but the real news came before the set when the world’s fastest server Groth accidentally hit Huber with a serve while she was retrieving balls during the warm-up.

It was a stroke of bad luck, and Huber left the court to receive attention from the trainer while the men’s doubles set was played.

The teams stayed on serve for much of the set, with Reynolds holding with aces for 1-0, and then 3-2.

In the sixth game, an amazing point ensued featuring two of the most spectacular shots you will ever see back-to-back.

Standing straight up at the net, Nielsen rapidly reflexed a half-volley lob inside the baseline. But not only did Groth retrieve it, he snapped his wrist quickly and hit a 360-degree overhead back at the Kastles. The Freedoms stole the point when Nielsen missed a volley wide, and wrestled away momentum as well.

After Groth held for 3-3, he hit a backhand return off the net cord to set Kerr up for a volley winner and give the Freedoms a 4-3 lead.

Though Groth is the Freedom most well known for his serve, it was Kerr who closed the set out emphatically with four service winners.

Following her run-in with one of Groth’s serves, Huber returned to the court for women’s doubles.

After a singles set full of nerves, Vickery managed to hold her serve and began to show off an intimidating two-handed backhand.

But on a 3-all point with the Kastles leading 3-2, Rodionova kept her serve away from Vickery’s backhand wing, targeting the forehand and drawing a short return that Hingis put away at the net.

After a down-the-line backhand winner by Vickery got the Freedoms to 3-4, Huber walked towards the Philadelphia bench to sit down.

A brief discussion with the doctor and trainer followed before Huber decided that she could not continue.

That left Vickery to play a game all by herself, conceding points on the deuce court where Huber was supposed to return. One fan in the stands shouted for Williams to leave her courtside seat and team with Vickery, drawing roars from the rest of the crowd.

Instead, Hingis and Rodionova wrapped up the set 5-3 in unorthodox fashion.

Breaks were always going to be hard to come by with Groth boasting a serve that often travels at speeds closer to 200 miles per hour than 100.

So when Reynolds led 2-1 and smacked a return winner en route to break point, he shouted for the entire crowd to hear.

As they had done in women’s singles, double faults haunted the Freedoms, with Groth missing a second serve into the net to concede the 3-1 advantage to Reynolds.

In the next game, Groth showed that he’s got more than just a big serve when he unleashed a lightning-fast down-the-line backhand winner past Reynolds.

That prompted the Kastles closer to share a long laugh with Williams, who was sitting only feet away.

“Nice shot, Happy Gilmore,” Reynolds yelled across the net to Groth, perhaps comparing the backhand to a slapshot in hockey.

Despite losing that point, Reynolds held with a service winner for 4-2. After Groth held, the Kastles closer clinched victory for his team when Groth missed a forehand.