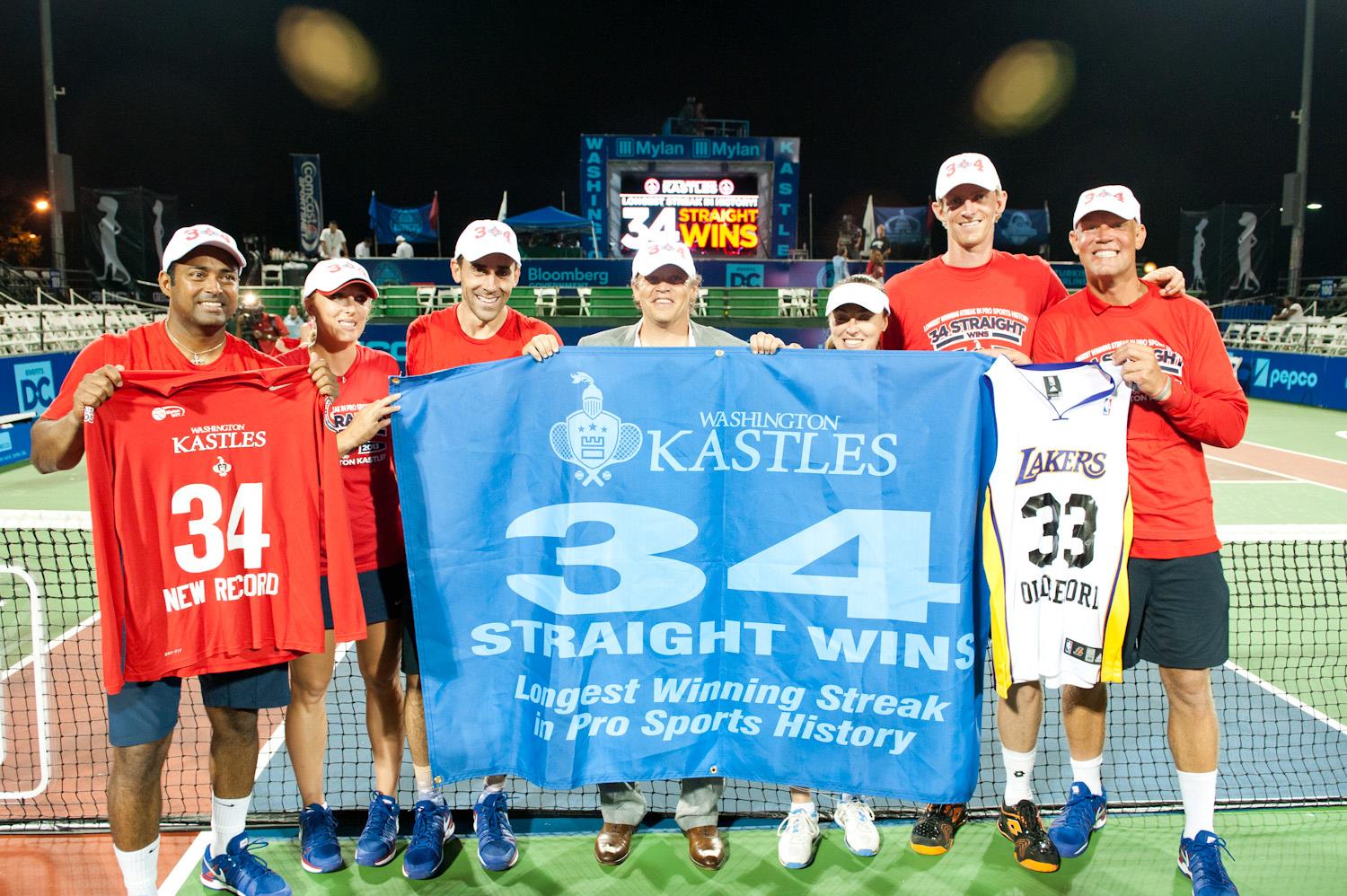 A winning streak three seasons in the making made it into the record books on Tuesday night when the Washington Kastles defeated the Boston Lobsters 25-12 for their 34th consecutive victory.

The Kastles have not lost since falling to the Lobsters on July 22, 2010, more than 1,000 days ago. Though Tuesday’s match was rather routine, many during the team’s unbeaten run have been anything but.

Washington has won four matches in a Supertiebreaker and seven matches by one game, saving 10 match points in three different matches along the way.

Tom Brady and the New England Patriots won 21 consecutive games over the course of the 2003 and 2004 NFL seasons, then Tracy McGrady and the Houston Rockets did one better with a 22-game unbeaten run in 2007-08. Earlier this year, LeBron James and the Miami Heat, streaked to 27 straight wins before being undone by the Chicago Bulls.

Now a Kastles team playing just its sixth season of Mylan World TeamTennis has passed them all.

Lakers Executive Vice President Jeanie Buss, who was involved with WTT in the 1970s as an executive for the Los Angeles Strings, issued a congratulations statement after the Kastles’ win.

“Winning 33 consecutive games was an amazing accomplishment by our 1971-72 Lakers team, as evidenced by the fact that no other team has come close to reaching it for over 40 years now,” said Buss. “On behalf of the Buss family and the Lakers family, I want to congratulate the Washington Kastles, their players, and our good friends Billie Jean King and Ilana Kloss [of Mylan WTT] on this milestone accomplishment of theirs.”

With another capacity crowd eagerly anticipating a magical evening, six-foot-eight Kevin Anderson got the Kastles off a fast start, winning 16 of 18 points on his speedy serve to win men’s singles 5-2. The women’s doubles team of Martina Hingis and Anastasia Rodionova followed suit with a 5-3 victory.

Hingis remained on court for the third set, teaming with 13-time Grand Slam doubles champion Leander Paes to claim mixed doubles 5-3 and give Washington a 15-8 advantage overall at the half.

On a night when Washington celebrated a historic unbeaten run, the Swiss superstar Hingis created a mini-streak all her own by winning a third straight set. She defeated Jill Craybas 5-2 in women’s singles to put the Kastles ahead 20-10 going into the final set of men’s doubles.

That left Paes and Bobby Reynolds in prime position to close out the Kastles’ 34th straight win, which they did when Paes hit a service winner on Washington’s first match point. The Kastles closer Reynolds has been on court to clinch 21 of Washington’s record 34 consecutive victories.

The Kastles’ celebration won’t last long. They fly to Dallas tomorrow for a road match at 8:35 pm DC time against the Texas Wild before returning home Thursday to meet Andy Roddick and the Springfield Lasers. Demand to see the streaking Kastles is only growing, so before it’s too late.

Just as he did on opening night, Anderson showed off sheer power from the very first point. He began the historic evening with a backhand winner, then back-to-back aces down the tee, and finally a service winner to hold at love.

Anderson possesses one of the best serves in the world, so when Amir Weintraub stepped to the line in the following game, there was no denying the difference. The new Kastle took advantage, breaking immediately with a down-the-line backhand winner.

Two minutes later, Anderson was leading 3-0, having won 12 of the first 14 points of the set. That prompted Lobsters coach Bud Schultz to call a timeout and regroup his player.

It worked in the sense that Weintraub would go on to hold his serve twice. But he could not get any grip on his return, with Anderson even connecting on a second serve ace. The 6-foot-8 South African finished with four aces all together and wrapped up the set 5-2 with a service winner. Weintraub won only two of Anderson’s 18 service points.

Holds by Craybas and Rodionova kicked off the women’s doubles set, before the Kastles turned up the heat on Katalin Marosi‘s serve.

At 2-2 in the third game, Rodionova pummeled a backhand return winner to bring about a break point, which Hingis converted with backhand winner of her own that bounced off the net cord and past Marosi.

Hingis rode that momentum to a love hold, giving the Kastles a 3-1 advantage in the set. But the Lobsters clawed their way back with a hold and a break of Rodionova to even the set at 3-3.

Marosi’s serve, however, was vulnerable throughout the set, and the Hungarian was broken a second time when a well-struck Rodionova lob over Craybas could not be returned.

Perhaps inspired by Anderson’s performance in singles, Hingis closed the set in style, pummeling an ace out wide to clinch it 5-3 and keep the Kastles cruising.

The Lobsters probably hoped they had seen the last of Anderson’s super-sized serve after singles, but Coach Murphy Jensen sent him back out to begin mixed doubles.

The World No. 22 picked up where he left off, acing Marosi twice and holding at love before being subbed-out by the former doubles World No. 1 Paes.

For much of the set, it was as though every player’s serve was as unreturnable as Anderson’s. Neither team earned a break point until the Kastles led 4-3 in the set with Marosi serving.

After the Lobsters won the first point of the game, Hingis hit a return winner off the net cord. Now even at 1-1 in the game, Paes hit a forehand with so much angle that it nearly sent Marosi crashing into sponsor signs on the side of the court, setting Hingis up for a put-away volley.

Marosi bounced back with a service winner for 2-2, but Paes burned Eric Butorac on the following point with a run-around forehand winner into the alley that Butorac vacated.

That gave the Kastles double set point. Though Marosi saved the first when Hingis’ return landed just wide, Butorac again got caught poaching on the deciding 3-all point. Hingis capitalized with a volley winner into the open court as Washington separated itself even further from Boston going into halftime.

Women’s singles pitted the 5-foot-7 Hingis against the 5-foot-3 Craybas — two players with similar styles. But as the 15-time Grand Slam champion proved Tuesday, she’s simply better at everything that both players do.

Hingis held for 1-0 with a down-the-line forehand winner, broke for 2-0 on a Craybas backhand error and jumped ahead 3-0 with an inside-out forehand that wrong-footed the Lobster.

As was the case at 3-0 in men’s singles, the Lobsters’ coach Schultz called timeout to stop the bleeding. Craybas managed to hold in her final two service games, but never mustered a break point on her return.

Inside the intimate Kastles Stadium at The Wharf, Hingis’ genius is even clearer for fans to see. The Swiss simply never hits two straight shots the same height over the net, mixing flat drives, top spin, drop shots and slices with the slightest of ease.

Hingis finished Craybas off behind a love hold for 5-2, setting the Kastles closer Reynolds and Paes up for a historic finish.

Reynolds waited over two hours to see his first action of the match. But he played as if he’d been waiting his whole life for this one set of tennis.

After the 2012 WTT Male MVP closer held for 1-0, he hit three remarkable return winners in a row to break Butorac, highlighted by a blistering backhand down the line on a 3-all point.

With the Kastles leading 2-0, Paes fell behind 0-3 on his serve, but Reynolds again hit three more winners to rally his partner and give Washington a 3-0 advantage in the set.

If you didn’t know any better, you would have thought that Reynolds was treating Kastles Stadium like Centre Court at Wimbledon, where two weeks ago he was taking on World No. 1 Novak Djokovic.

Such was the passion with which he played, and has played, since he was on court for the Kastles’ last loss nearly three years ago.

From 3-0, Weintraub, Reynolds and Butorac held serve, putting Paes in the precarious position of serving for history.

During that fateful seventh game of the set, the capacity crowd teetered from seconds of sheer silence to moments of maniacal mayhem.

Once Reynolds leaped into the air for an overhead smash that gave Washington match point, every man, woman and child at Kastles Stadium rose as one.

And when Paes booked Washington’s place in the record books with a service winner, his fellow Kastles on the bench celebrated, fans poured toward the court to get a closer look, reporters grabbed a hold of their microphones and the world of professional sports stood still for a team that simply knows no boundaries.

No one who watched the Kastles win their first match of 2011 could see this winning streak coming. And no one who saw Washington dominate all five sets on Tuesday could see it ending.