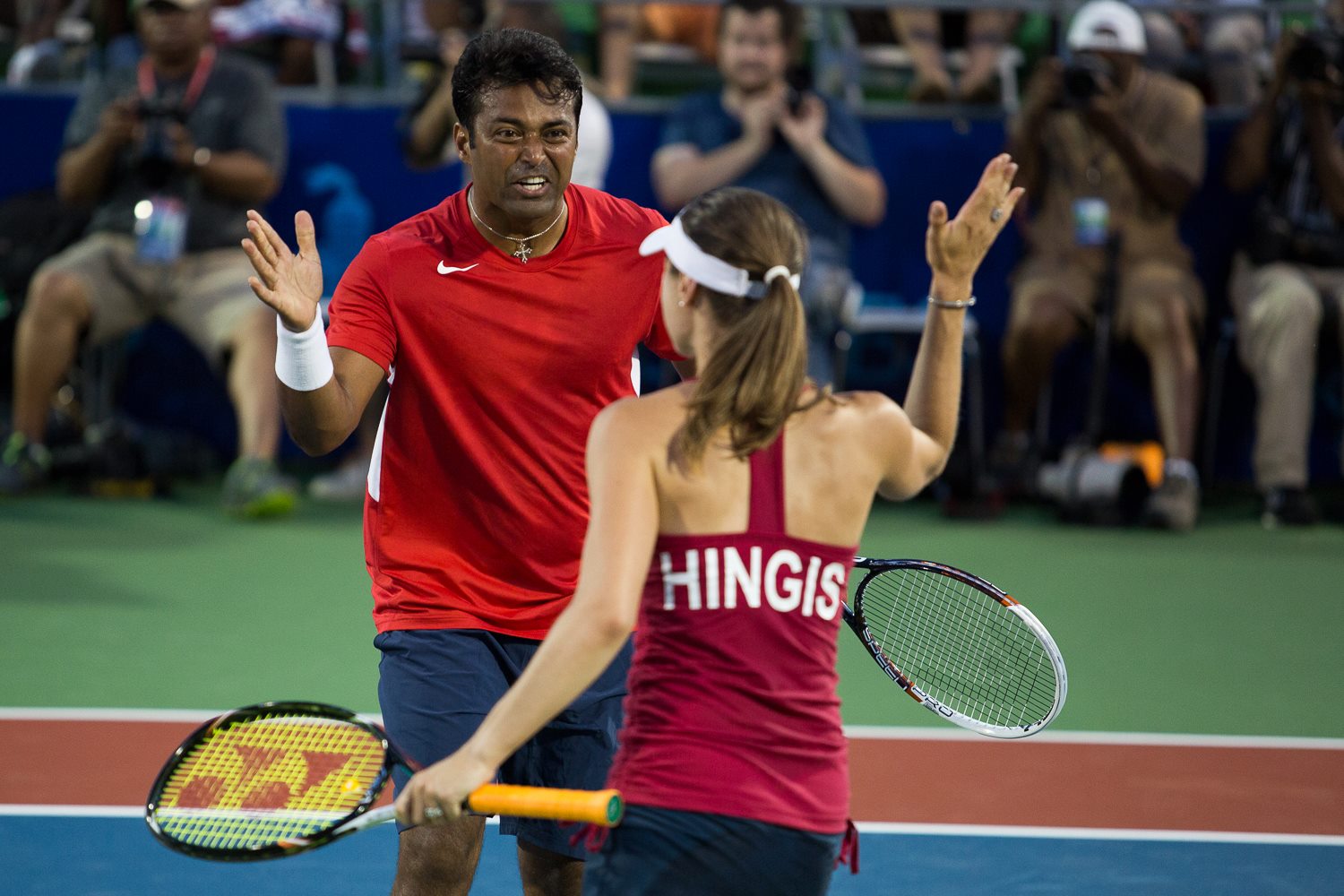 The Washington Kastles kicked off their 2013 season in historic fashion, defeating the New York Sportimes 23-15 in front of a sold-out crowd for their 33rd consecutive victory overall. Washington has now tied the 1971-72 Los Angeles Lakers for the longest winning streak in major U.S. pro sports history.

It was a star-studded night on and off the court Monday. First Lady Michelle Obama, Washington Redskins Hall-of-Famer John Riggins and CNN anchor Wolf Blitzer cheered on Grand Slam champions

Throughout the evening, Venus Williams supported her Kastles teammates from the bench, unable to compete because of a back injury. Williams, Reynolds, Paes, Anastasia Rodionova and Coach Murphy Jensen were presented championship rings by the Super Bowl XVII MVP Riggins in honor of their 16-0 season in 2012.

The time for celebrating is short as the Kastles return to the Southwest Waterfront tonight with history on the line. The Kastles will play for sole possession of the longest winning streak ever by a major U.S. pro sports team when they host the Boston Lobsters at 7 pm.

Don’t miss your chance to be part of history. Tickets are very close to selling out, so get yours right now at . Martina Hingis and Leander Paes, and the Kastles dominated from the first serve.

World No. 22 Kevin Anderson made a winning debut for Washington, defeating Jesse Witten 5-2 in the opening set of men’s singles. Hingis followed suit, beating Anna-Lena Groenefeld 5-1 in her first match as a Kastle.

The Sportimes cut Washington’s advantage to 11-6 overall when they took a 3-1 lead in mixed doubles. But Hingis and Paes rallied behind spectacular shotmaking to steal the set 5-4 in a tiebreaker.

New York bounced back when Wimbledon doubles semifinalists Groenefeld and Kveta Peschke won women’s doubles 5-3. But with Washington leading 18-12 overall going into the final set, it was too little, too late for the Sportimes. Kastles closer Bobby Reynolds teamed with Paes to win the final set of men’s doubles 5-3.

It didn’t take long for Anderson to make a big impression on the 2,600+ Kastles fans in attendance. The 6-foot-8 South African opened the 2013 season with a blistering forehand winner on the very first point, which he followed with a service winner, then topped with an ace.

The sheer power of his serve nearly beheaded Witten on one serve in the set, forcing the Sportime to squat on the surface and use his racquet in self-defense. Another of Anderson’s service bombs collided with a cheerleader in the corner of the court.

Witten did well to hang with Anderson through four games. But from 2-2 in the set, the new Kastle seized control. He held for 3-2 with a down-the-line backhand winner on the dead run that prompted Obama to cheer wildly from her front-row seat.

Then, in the next game, Anderson broke Witten for a 4-2 lead when he followed a strong backhand return with another deep shot that drew an error from the Sportime.

When Anderson held four set points with a 3-0 lead at 4-2, the set surely appeared to be his.

But Witten won the next three points, prompting a timeout from Coach Jensen before the crucial 3-all point. Were Witten to win it, the set would be back on serve.

After a brief conversation with Jensen, Anderson regrouped, stepped to the service line and blasted a service winner out wide to win the set and set the tone for the Kastles.

With Hingis making her much-anticipated Kastles debut, it was Groenefeld who started the hotter of the two players. The Sportime hit back-to-back backhand winners before breaking Hingis to begin the set.

But from there, it was all Hingis, who broke back for 1-1 by moving Groenefeld from side to side, then drawing an error after luring her into the net with a sharply-hit slice.

Hingis’ versatility was on full display for thousands of fans who used to root against her from her years as a Sportime.

The Swiss sensation served-and-volleyed successfully to hold for 2-1, broke for 3-1 on an unforced error by Groenefeld, then held again for 4-1 with a deceptive ace down the service tee.

Hingis topped all of that in the final game of the set, bringing even her teammates to their feet with a spectacular backhand drop shot that caught Groenefeld completely off guard. Hingis clinched the set 5-1 one point later, and more importantly, secured a 10-3 lead for Washington that would prove insurmountable.

Over the course of Washington’s 32 consecutive wins in 2011 and 2012, Coach Jensen had never once made an in-match substitution.

That all changed on Monday when the big-serving Anderson began the mixed doubles set alongside Hingis. Seeking an easy hold to start the set, that’s exactly what the Kastles coach got as Anderson punished three more aces before Paes was substituted into the match after one very impressive service game.

That put three former World No. 1 doubles players on court at the same time: Paes, Hingis and Peschke. Currently ranked 11th, Peschke sparked a three-game run for the Sportimes, culminating in a perfectly-struck lob over both Paes and Hingis.

Now trailing 3-1, Hingis and Paes upped their level, with Paes holding for 2-3 after Hingis made a pair of great reflex volleys.

Then, Hingis returned the favor on Peschke’s serve with a lob winner over both Sportimes on break point to draw the Kastles even at 3-3.

The Kastles kept their momentum when Hingis held for 4-3 by winning a decisive 3-all point with a service winner. The back-and-forth action continued in the next game when Peschke won a 3-all point on her own serve by finding an open spot between Paes and Hingis for a volley winner.

In the ensuing tiebreak at 4-4, the Sportimes took an early 2-0 lead following a pair of out-of-the-ordinary volley errors from Paes. But Kendrick followed with two errors of his own.

At 2-2 in the tiebreak, the best point of an already spectacular set was played, with Hingis hitting five volleys in a row as Kendrick and Peschke defended from the baseline. Rather than hit a sixth, Hingis got out of the way after Paes yelled, “Mine!” The Indian proceeded to smash an overhead winner to a huge ovation from the capacity crowd.

From 3-2, Hingis nailed a service winner and Peschke netted a forehand to give Washington a 15-7 advantage going into halftime.

Women’s doubles was always going to be a tough proposition for the Kastles. Hingis and Rodionova were playing together for the first time Monday, while Groenefeld and Peschke reached the Wimbledon doubles semifinals last week and are currently one of the top-ranked doubles teams in the world.

Yet, the two teams appeared evenly matched through four games, with each player holding serve to make the score 2-2.

Rodionova shined in the ensuing game, hitting three backhand volley winners. But it was not enough for Hingis to hold as a Groenefeld volley winner on a 3-all point gave New York a 3-2 lead in the set.

A poor game on serve from Groenefeld leveled the set at 3-3 for the Kastles, but the German made up for it by hustling to a drop shot, then unloading on a volley into Hingis’ body to put New York up 4-3.

After four holds and three breaks, Peschke restored order and served out the set 5-3.

After supporting his teammates all night from the bench, Reynolds made his first appearance in the match right where he always wants to be – in position to close a Kastles victory.

But the 2012 WTT Male MVP was broken in the first game of the men’s doubles set when Witten made a remarkable get off of a lob, and Reynolds misfired on a swing volley as he tried to end the point.

It marked the fourth straight set that the Sportimes earned the first break, but the Kastles repeatedly fought back.

Such was the case in men’s doubles, with Reynolds dipping a return and Paes cutting across the court to slam home a volley winner, allowing the Kastles to break back for 1-1.

After holds by both teams to make the score 2-2, the Kastles captain Paes sent fans into a frenzy with not one, but two knifing drop volley winners on the full stretch to give Washington a 3-2 advantage.

Witten held for 3-3 and Paes did the same for 4-3, leaving the set and the streak on the racquet of the Sportimes’ Kendrick. After Paes carved a backhand return that Kendrick couldn’t handle, Washington earned two match points.

Every fan inside Kastles Stadium rose as one and screamed “Let’s Go Kastles,” eager to see Washington clinch its record-tying 33rd straight win.

But Kendrick saved the first match point with a service winner, bring up a 3-all point that would either send the set into a tiebreak or send the Kastles home as winners.

The Kastles closer Reynolds readied himself for a pivotal return, but he never even had to swing his racquet. Kendrick double-faulted to gift Washington its ninth straight win against New York and, more importantly, a chance to make history tonight.