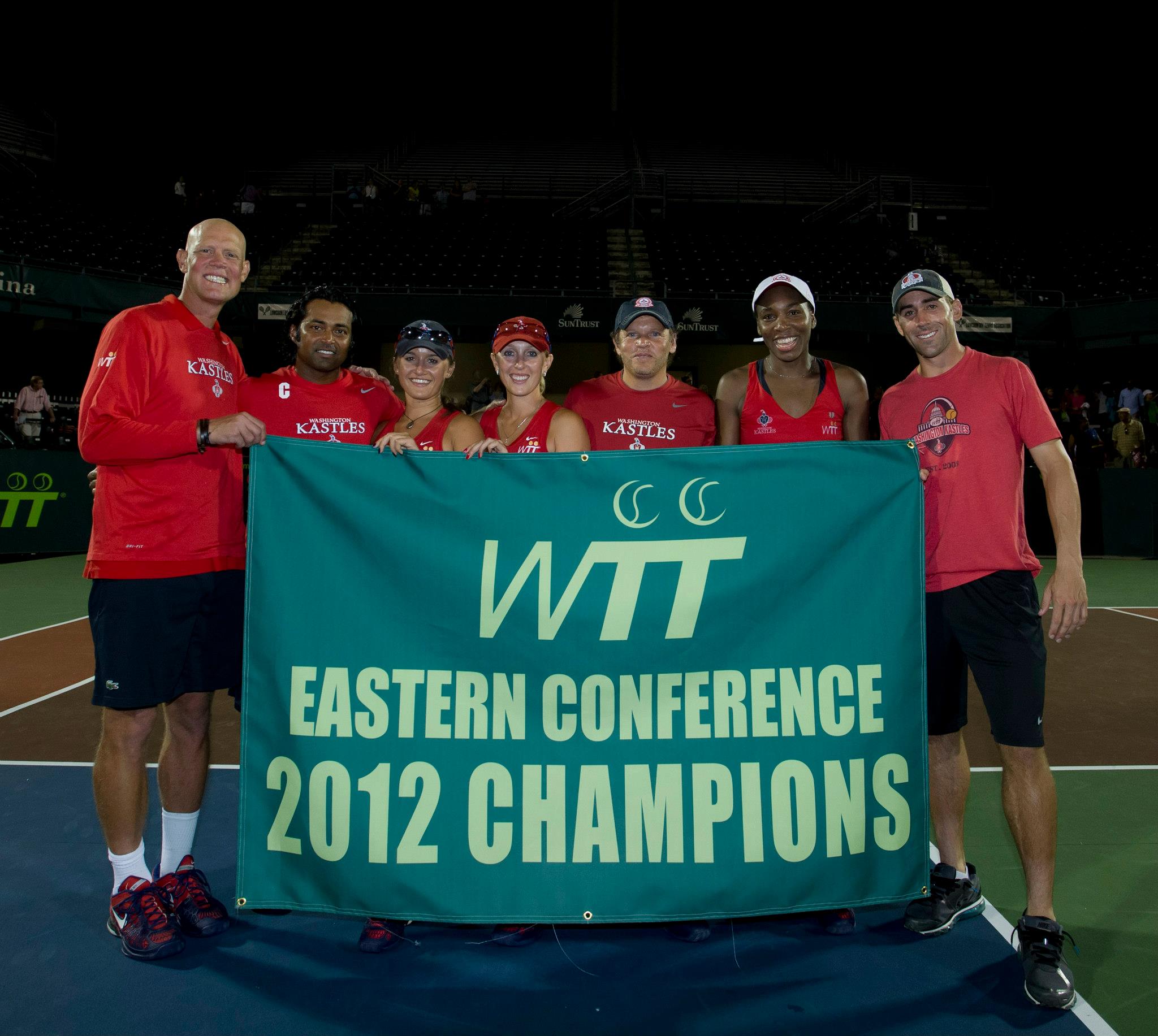 She’d been there before — the pressure of a perfect season and a historic winning streak squarely on her shoulders against her team’s fiercest rival.

And just as she did in Albany on July 21st, Venus Williams willed the Washington Kastles to another nail-biting victory over the New York Sportimes.

The third-year Kastle broke a 14-14 tie by winning women’s singles over Ashley Harkleroad 5-1, the same set score that sparked the largest comeback in Kastles history when Williams defeated Martina Hingis during the regular season.

Williams’ victory over Harkleroad clinched the Eastern Conference Championship match 19-15 and sent the Kastles into the WTT Finals for the third time in four years.

The Kastles will seek to add to their 2009 and 2011 WTT titles when they meet the Sacramento Capitals this afternoon at 3:30 pm live on .

If you’re one of the hundreds of Kastles fans who made the trip to Charleston, you are encouraged to wear RED to today’s match. We want to paint the Family Circle Tennis Center in Kastles colors just as we did on Saturday night.

The match was tied through two sets before reigning WTT Male MVP Bobby Reynolds came through with clutch serving to defeat Jesse Witten 5-2 in men’s singles.

The Sportimes quickly rebounded to even the match at 14-14 when Ashley Harkleroad and Kveta Peschke won women’s doubles 5-2.

With the match tied and only women’s singles remaining, the four-time Olympic gold medalist Williams dropped the first game on her serve before raising her tennis to another level to sweep the rest of the set 5-1, capping the Kastles’ 31st consecutive victory.

The Kastles are now one win away from completing a second consecutive 16-0 season.

The strong returning of Reynolds and incomparable net play of Leander Paes allowed the Kastles to build an early lead against the Sportimes.

After three holds to start the match, the Kastles appeared poised to pounce on the serve of Hall-of-Famer John McEnroe. Paes hit a pair of volley winners to give the Kastles three break points.

The left-handed McEnroe saved the first two with his unique southpaw serve. But on the third, Reynolds nailed three straight shots at the American legend, the last of which flew long off of McEnroe’s racquet, giving the Kastles a 3-1 lead.

After Reynolds held at love for 4-1, the Kastles earned two set points on Robert Kendrick‘s serve. Kendrick erased both with back-to-back service winners, forcing Paes to serve out the set at 4-2.

Kendrick, who exchanged body blows with Paes during an unforgettable 2009 Kastles vs. Sportimes match, forced a 3-all point on Paes’ serve with a picturesque top spin lob winner.

With momentum on Kendrick’s racquet, the Sportimes elected for McEnroe to take the return at 3-all. Before the point was even played, it appeared to be a questionable decision. When McEnroe bricked a second serve return to clinch the set 5-2 for the Kastles, it puzzled even further.

McEnroe started the mixed doubles set alongside Peschke, who was substituting for Hingis after the Swiss withdrew on Wednesday due to personal reasons.

But with the score tied at 2-2 and the teams changing sides of the court, Sportimes Coach Chuck Adams elected to replace McEnroe with Kendrick.

Adams effectively atoned for the Sportimes’ bad choice at the end of the first set, because Kendrick took over in mixed doubles.

After holding for 3-2, he nailed a forehand return winner to set the Sportimes up with break point on Paes’ serve. Kendrick converted with another rapid forehand directed at Williams, who popped her volley long.

Peschke followed up by serving out the set for a 5-2 New York win, tying the match score at 7-7.

Washington is tied with New York 7-7.

Time and again in the men’s singles set, Reynolds faced trouble on his serve against longtime adversary Witten.

And time and again, the Kastles closer dug himself out of a hole by exposing Witten’s movement, especially towards his weaker backhand side.

In each of his first two service games, Reynolds rallied form 0-2 down to hold. He broke Witten in the Sportime’s opening service game, but after failing to convert break points in the fourth game, Reynolds was back in trouble at 3-1 in the set and 2-3 in the game.

Witten had finally earned his first break points of the set, but Reynolds denied him each time with deep and flat service winners into the Sportime’s body to take a 4-1 lead.

After Witten hit an ace to make the score 4-2 in favor of Reynolds, the reigning WTT Male MVP faced a 3-all point. Win it and he’d clinch the set for Washington. Lose it and he’d be back on serve with the big-hitting Witten.

As he’d done throughout the set, Reynolds avoided adversity with a strong first serve, setting himself up for a first-ball forehand winner and giving Washington a three-game lead going into halftime.

In a set that featured a pair of former World No. 1s in doubles (Williams and Peschke) and a current Top 25 doubles player (Anastasia Rodionova), the set began with three straight breaks. It was the unheralded Harkleroad who became the first player to hold serve, giving New York a 3-1 lead.

Rodionova responded in the next game with two backhand volley winners to help Williams hold for 2-3. But Harkleroad countered with two volley winners of her own on Peschke’s serve to make the score 4-2 in favor of the Sportimes.

A backhand error by Rodionova in the following game allowed the Sportimes to win women’s doubles 5-2 and tie the match once again, meaning the Eastern Conference title would come down to women’s singles.

Entering the final set, it had been a rough night for Williams, who looked flat overall in  5-2 losses in mixed and women’s doubles.

Things weren’t looking much better when Williams double-faulted twice to gift the first game of women’s singles to Harkleroad. That gave New York its first lead of the evening 15-14.

Slowly but surely, however, Williams got her groove back. She began moving Harkleroad from side to side behind the baseline, breaking back with a down-the-line backhand winner.

With the volume of her grunting and intensity of her shots clearly rising, Williams held for 2-1 with an ace down the service tee. As Williams’ play improved, Harkleroad showed signs of discouragement, acknowledging that the prospects of her leading the Sportimes to a win were dimming.

As she did in saving four match points against Hingis during the regular season, Williams would not miss during the fourth game against Harkleroad, forcing four forehand errors and breaking her countrywoman to take a 3-1 lead.

Two aces and a service winner allowed Williams to open up a 4-1 advantage, and when she blasted a forehand return past Harkleroad on match point in the following game, Williams put a quick end to a match that appeared destined for a dramatic finish.

The Kastles are now 9-0 all-time with Venus Williams in their lineup. To get win No. 10 with Williams, Washington will need to defeat a dangerous Sacramento squad.