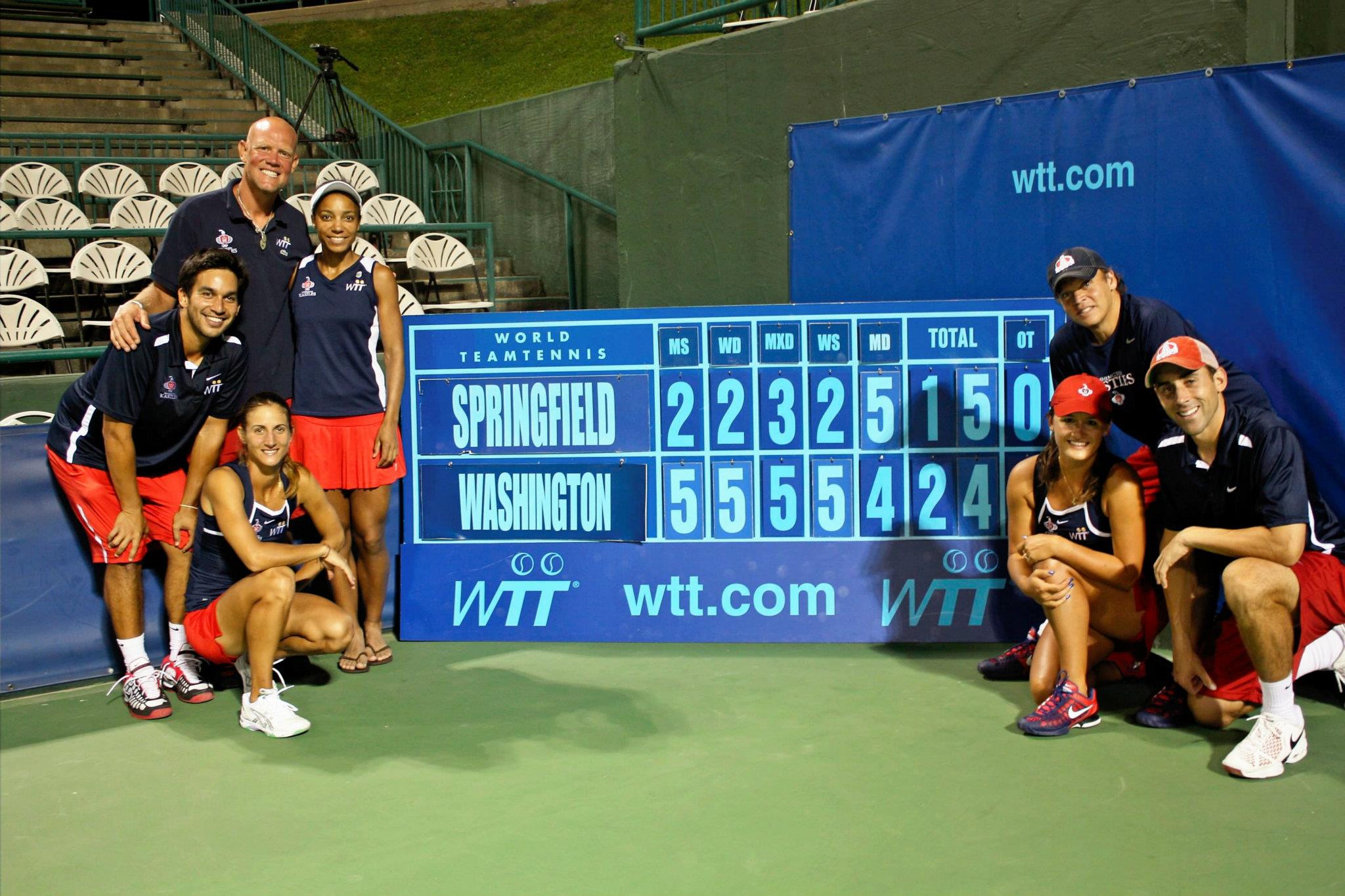 The Kastles’ streak of consistency is particularly extraordinary given the parity of the rest of the league, the format which creates close matches often decided by a few points, a rigorous travel schedule and the fact that the Kastles lost several of their best players to the Olympics at the end of this season.

The 2012 Kastles joined the 2011 Kastles and 1994 Newport Beach Dukes as the only three teams in World TeamTennis history to finish a regular season 14-0. The 2011 Washington squad is the lone team in 37 years of WTT play to capture the King Trophy with a perfect 16-0 mark.

Washington won the first four sets to jump all over the Lasers (4-10). Bobby Reynolds got the night started with his fifth straight men’s singles victory, cementing his status as the league’s year-end No. 1-ranked men’s singles player.

New Kastles Raquel Kops-Jones, Edina Gallovits-Hall and Treat Huey swept the next three sets of women’s doubles, mixed doubles and women’s singles. Though Huey and Reynolds lost men’s doubles in a tiebreaker, the Kastles led by 10 games after five sets and clinched their 30th straight win in the first game of overtime.

The last four matches of the regular season, in which three new players joined the team, were a tribute to the culture of the Kastles, the coaching of Murphy Jensen, the bench support of injured Arina Rodionova, the leadership of Reynolds and the new Kastles players themselves, who practiced hard, came together as a team and didn’t miss a beat stepping in for Olympians Leander Paes, Anastasia Rodionova and Venus Williams.

While Reynolds thrives in his role at home as the Kastles’ closer, he’s become accustomed to opposing coaches scheduling him first up in singles when the Kastles are on the road.

First or fifth, Reynolds’ results of late have been consistently impressive. By defeating Devin Britton 5-2, Reynolds swept his final five singles sets of the season, winning 25 of 31 games during that stretch.

With Olympians Paes, Rodionova and Williams missing from the Kastles’ lineup since Tuesday, Reynolds stepped up as the team’s leader.

On Saturday, he withstood an early barrage of aces and go-for-broke groundstrokes by Britton, patiently playing steady tennis until the young American cooled off.

Reynolds did not concede a single break point in the set, and he benefited from a rash of errors after the set was tied at 2-2 to break Britton two straight times and stake an early lead for the Kastles.

After Reynolds won the final four games of men’s singles, Gallovits-Hall and Kops-Jones swept the first three in women’s doubles in dominant fashion, building momentum by winning 12 of the first 14 points.

Through a lot of practice and preparation in their one week as teammates, the new Kastles saved their best set for last, serving strongly and volleying aggressively.

A break of Maria Sanchez‘ serve in the second game was all Gallovits-Hall and Kops-Jones would need to win the set. The Kastles served it out when Kops-Jones hit a volley winner for set point, which Gallovits-Hall converted with a service winner.

If there was one glaring weakness for the Lasers on Saturday, it was the serve of Sanchez. Broken at love in women’s doubles, the USC alum won 0-of-8 points on her serve in mixed doubles.

But after breaking Sanchez for a 2-1 lead, Kops-Jones was broken back to even the set at 2-2. Britton backed that up with a hold to give Springfield a 3-2 advantage in the set, saving a pair of break points with a mis-hit winner off his frame followed by a service winner.

The Lasers had stolen momentum with Britton’s stroke of luck, jumping out to a 3-1 lead and triple-break point on Huey’s serve in the following game.

But Huey saved all three with unreturnable serves, the third of which was a daring kick serve out wide for an ace. Had he not saved his serve, the Lasers would have had a chance to cut the Kastles’ lead to three games, but instead the Kastles maintained a big lead in the overall score.

With Sanchez now serving at 3-3 in the set, the Kastles to capitalize with another love break and Kops-Jones went on to serve the set out with a service winner, opening up an insurmountable lead for Washington.

But Huey saved all three break points with unreturnable serves, the third of which was a daring kick serve out wide for an ace.

Sanchez served at 3-3 in the set, allowing the Kastles capitalized with another love break. Kops-Jones went on to serve the set out with a service winner, opening up an insurmountable lead for Washington.

On tour, Gallovits-Hall likes to work her way into the match and usually elects to return serve first when winning the toss. But in team tennis, in which the sets are short and having the first serve is an even bigger advantage, that strategy doesn’t make sense. So for the second straight night, Gallovits-Hall served first, started tentatively and was broken to begin her singles set. But as she did Friday against the Explorers, the Kastles’ substitute found her legs, rhythm and timing, and worked her way into the set. In the second game, Gallovits-Hall started working the points, moving the big-hitting, but less-consistent Sanchez all over the court. At 3-all, Gallovits-Hall had Sanchez on a string, moving her from one side of the court to the other before forcing a forehand error from the exhausted Sanchez to even the set at 1-1.

Gallovits-Hall followed that break of serve by getting even more aggressive with her full arsenal of shots in the next game, taking it at love with a lob winner, drop shot winner and two service winners. She carried that momentum and aggressive play into Sanchez’ next serving game gaining three break points before Sanchez countered with strong serves and groundstrokes to save all three and even the set at 2-2.

But Gallovits-Hall didn’t let up, storming through three straight games by only dropping three points. She held for 3-2 behind three service winners, hit a series of powerful returns to break for 4-2, and then served out the set with two forehand winners and a service winner.

Despite the slow start, the new member of the Kastles finished extremely strong. Her best performance of the season gave the Kastles’ men an insurmountable lead going into the final set of the regular season. Washington leads 20-9.

With an 11-game lead going into the final set, the Kastles had all but clinched their second straight regular season of perfection.

But the Lasers weren’t going to make matters easy for Washington and with four big servers on the court, breaks of serve were going to be hard to come by.

After the Kastles hit a series of big returns to break Amir Weintraub in the third game, Huey had an opportunity to cement the perfect season on his serve.

But at 4-3, 3-all, he double-faulted to bring about a tiebreaker, which the Lasers dominated on serve 5-1.

Washington and Springfield were headed to overtime, but the Kastles’ 10-game advantage meant their 30th straight win was only a matter of time.

It was only fitting that the Kastles’ closer Reynolds had the team’s second straight perfect regular season on his racquet in overtime.

Four points was all he and Huey needed. Reynolds nailed an ace out wide on the Ad-court to send the Kastles to Charleston, S.C., with a 30-match winning streak and a chance to complete back-to-back 16-0 perfect seasons.

Kastles players will now return to tournament play until WTT Finals Weekend September 14-16. Huey and Gallovits-Hall are making the trip back to Washington to compete at this week’s Citi Open.

Then, following the US Open, the Kastles will turn their attention to the New York Sportimes, whom they have defeated in seven straight meetings. In the Western Conference Championship match, the Orange County Breakers face the Sacramento Capitals.