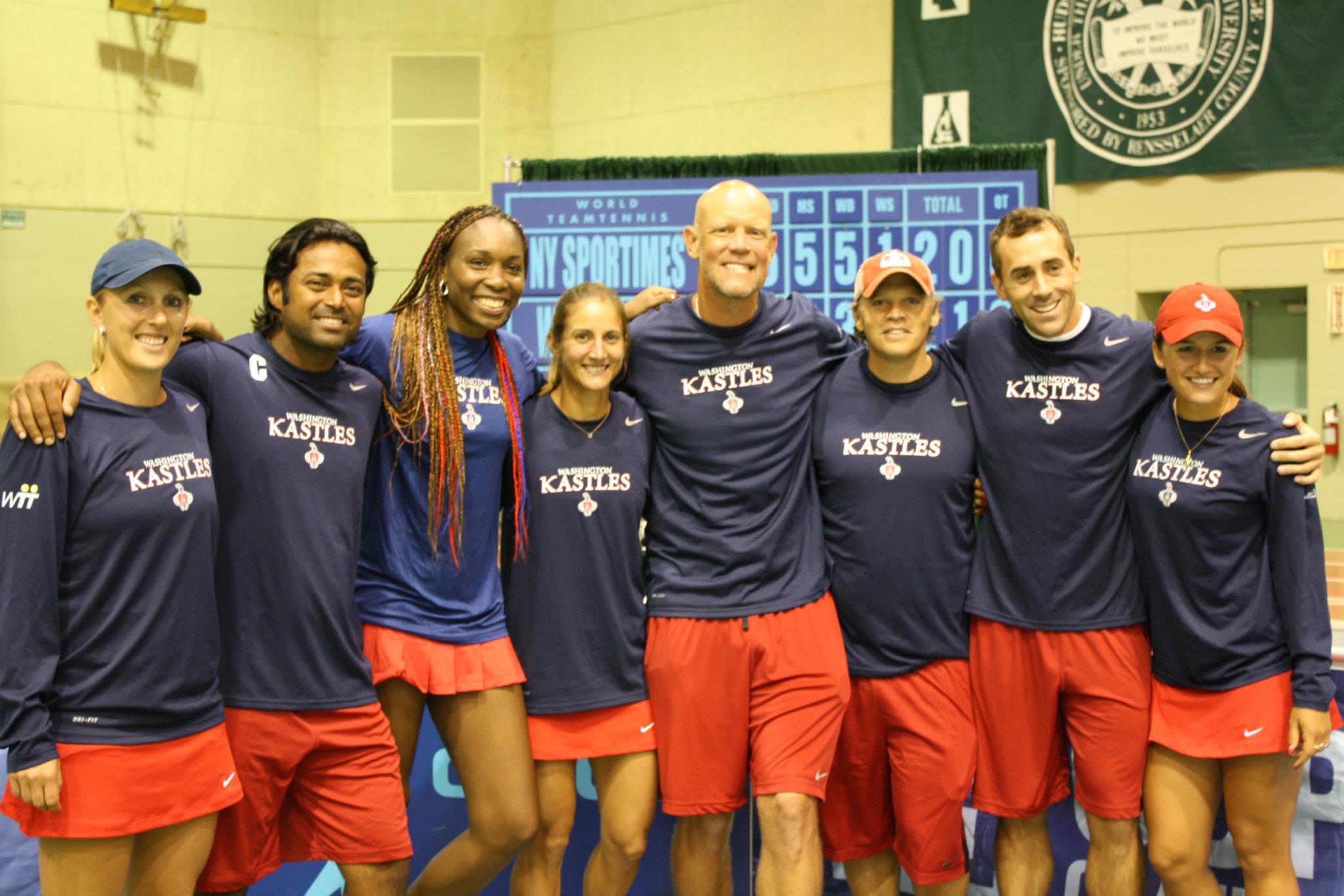 Trailing by six games with one set remaining, the Washington Kastles (9-0) completed the biggest comeback in franchise history to capture their 25th straight victory, shocking the New York Sportimes 21-20 in Albany on Saturday night.

Venus Williams led the Kastles back from a 19-13 deficit in the fifth set by defeating Martina Hingis 5-1 in a women’s singles meeting between former World No. 1 players.

That left New York with a 20-18 lead after five sets, but since the Kastles won the final set, the match went to overtime. For Hingis to clinch a victory for the Sportimes (6-3), the Swiss had to win one game before Williams won two to tie the match score.

After Williams broke Hingis to begin overtime, Hingis jumped out to a 3-0 lead on Venus’ serve to earn four match points in the following game. From that moment on, Williams never missed a ball, showing the shot-making and intensity that has made her a five-time Wimbledon singles champion.

The Kastle swept 11 points in a row — all four Hingis match points followed by all seven points in a Supertiebreaker — to preserve Washington’s historic unbeaten streak. After hitting a service winner to cap the comeback, a jubilant Williams was lifted high above the court by her teammates, raising her arms in ecstasy as though she’d just won Wimbledon title No. 6.

“My whole team believed in me,” Williams said in a television interview after the match. “I’m really glad that I was able to play last, because in singles, you’re in control of it. It was like a zone, and everybody on the bench was there for me. I just tried to play from within and it was great to do it for the team.”

Washington has now won four Supertiebreakers (three against New York) and saved 10 match points (all against the Sportimes) during its run of 25 consecutive wins, which dates back to the 2011 season opener last July 5th.

“I was inspired by our streak,” said Williams. “I don’t get the chance to play team tennis every week, so I wanted to do whatever I could to keep the streak alive.”

Venus Williams will lead the Kastles again tonight when the team returns home to meet the Kansas City Explorers at 7:00 p.m., airing live on CSN Washington. Immediately after tonight’s match, the three-time gold medalist Williams will board a flight to London to represent the United States in her fourth Olympic Games.

Seeking their sixth straight win against the Eastern Conference rival Sportimes, the Kastles came out of the locker room on fire, opening up a 3-0 men’s doubles lead on Robert Kendrick and Jesse Witten.

But serving with a two-break advantage, Leander Paes was broken in the fourth game, and again in the eighth game, allowing the Sportimes to force a tiebreaker in the opening set.

After Witten blitzed a backhand passing shot winner to take a 4-2 lead in the tiebreak, the last three serves were right back on Paes’ racquet.

Despite his struggles during the set, the six-time Olympian from India persevered when it mattered most: with the Sportimes holding three set points.

At 2-4, Paes froze Witten with a half-volley winner down-the-line. On the next point, Paes’ partner Bobby Reynolds made three reflex volleys to extend the rally before Kendrick netted a forehand.

Now at 4-4 in the set and 4-4 in the tiebreak, Paes saved his best serve for the decisive point, blasting a flat serve down the tee for a winner.

Had Paes and Reynolds not saved those three set points in men’s doubles, Washington would have trailed 20-12 going into the fifth set of women’s singles, and not 19-13, making Williams’ comeback attempt all the more daunting.

Paes, the No. 2-ranked mixed doubles player in World TeamTennis, suffered just his second loss of the season as the Sportimes took a 9-8 lead in the match by winning mixed doubles 5-3.

Paes and Williams remained on serve with Kendrick and Hingis until the Sportimes earned three break points at 3-3 in the set.

With Williams serving, Paes cheated toward the middle of the court a split-second too early, exposing the alley and allowing Kendrick to hit an easy forehand volley winner and break for a 4-3 lead.

The Kastles had two chances to break back on Hingis’ serve in the following game. But on the first, Hingis risked everything with a gutsy, flat second serve out wide that drew a Williams error.

Then, on a 3-all deciding point that would either result in a tiebreak for the Kastles or end the set for the Sportimes, Kendrick took a Williams return and dropped a volley over the net with soft touch for a winner.

College, ATP and WTT rivals Reynolds and Witten were playing for the 15th time since Reynolds starred for Vanderbilt and Witten reached the NCAA final for Kentucky.

With Reynolds leading the all-time series 8-6 coming into their singles set Saturday, Witten produced a near-perfect performance of attacking indoor tennis, which was the theme of the Sportimes’ play all night.

After taking the first game, the Sportime broke Reynolds and then held for 3-0 with back-to-back winners down the same line: one a forehand and the next a backhand.

Suddenly, the Sportimes led 12-8. Following holds by both men, Witten had a chance to give New York an even bigger lead on a 3-all deciding point with Reynolds serving at 1-4.

The Kastles’ closer came through with a clutch backhand to draw an error from Witten, preventing the Sportimes from claiming a 14-9 lead after three sets.

Instead, Washington settled for a four-game deficit when Witten held serve at love in the next game.

As in mixed doubles, little separated the Kastles and Sportimes during the early stages of the women’s doubles set.

That all changed with Ashley Harkleroad serving at 2-3 and the Kastles holding two break points. The former U.S. Fed Cupper saved the first with a service winner against Williams, prompting Coach Murphy Jensen to call a timeout.

At 3-all in the game, the Kastles had the choice of either Williams or Anastasia Rodionova to return Harkleroad’s serve. They chose Rodionova, but the Australian got jammed by a strong Harkleroad serve, allowing Hingis to hit a forehand volley winner between the two Kastles.

Momentum had swung back to the Sportimes, who broke Rodionova’s serve in the following game thanks to tremendous defense by Harkleroad. Once ranked No. 39 in the world in singles and doubles, Harkleroad retrieved two would-be winners in the rally before Hingis put away another forehand volley.

The Swiss, herself a former World No. 1 in singles and doubles, served out the set 5-3 to open up what appeared to be an insurmountable six-game lead for New York with one set to go.

Hingis entered her meeting with Williams as the league’s top-ranked women’s singles player, a perfect 8-0 on the season. Williams was coming in after a surprising 5-0 singles loss to Boston’s Irina Falconi on Monday.

Perhaps that’s why Sportimes’ coach Chuck Adams chose for women’s singles to be the fifth and final set of Saturday’s match.

It’s a decision that will haunt Adams for at least four days, until the Kastles and Sportimes meet again in New York City on Wednesday.

After falling in mixed doubles and women’s doubles, Williams was a woman on a mission in singles. With a champion’s look in her eye, she later said that she wanted to do everything in her power to keep the team’s undefeated streak intact.

Williams swept the first seven points of the set, including a crushing forehand return winner to break Hingis in the opening game.

With her longtime rival showing frustration, Williams turned one break into two when Hingis attempted to serve-and-volley to no avail — Williams’ crosscourt backhand return landing too low for Hingis get back.

Hingis managed just one hold in the set, and a Williams service winner clinched it for the Kastles 5-1 in only 19 minutes.

Overtime was a race to see if Hingis could win one game to clinch the match for New York before Williams could win two and force a Supertiebreaker.

The Swiss started stunningly, double-faulting twice to concede the first game at love. But in the second game of overtime, Hingis won the first three points on Williams’ serve, seemingly recovering her confidence when she needed it most.

To extend the Kastles’ historic winning streak, Williams would have to save four match points on her serve. Showing complete composure, she hit winners on the first two match points: an unreturnable serve and then a down-the-line forehand.

Hingis’ best chance to win the match came on Match Point No. 3 as the Swiss approached the net after a deep forehand that Williams could only chip back. With a makeable volley on her strings, Hingis failed to move her feet, and the result was an awkward swinging forehand that landed in the bottom of the net.

So close to ending Washington’s record run, Hingis was back at square one when Williams hit a crisp crosscourt forehand to draw an error on the deciding 3-all point of the game, which also served as the Sportimes’ fourth match point.

A Supertiebreaker was no place that the Sportimes wanted to be against the Kastles. On two separate occasions in 2011, matches between Washington and New York came down to a Supertiebreaker and the Kastles saved a combined six match points to win them both.

And that was without Venus Williams in the Kastles lineup.

An intense and emotional Williams yelled, “COME ON!” twice during the first four points of Saturday’s Supertiebreaker, opening up a 4-0 lead after two Hingis errors and two more crushing crosscourt forehands from the Kastle.

Having not missed a shot since she fell behind 0-3 in the final game of overtime, Williams just kept getting better. She brushed a backhand crosscourt at the acutest of all angles to force a Hingis error, and then took a 6-0 lead with a down-the-line backhand winner that landed squarely on the sideline.

Her encore performance comes tonight in DC when she leads Washington against Kansas City. A Kastles’ victory over the Explorers would boost their winning streak to 26 matches, tying them with the longest unbeaten run in Major League Baseball history, attained by the 1916 New York Giants.

The Kastles need only one more win over their final five matches this season, or one more loss by the 4-5 Philadelphia Freedoms, to clinch a spot at WTT Finals Weekend September 14-16 in Charleston, S.C.

With two more Washington victories, or one win and one Sportimes’ loss, the Kastles would also secure the best record in the league for the second straight season, giving them the all-important right to choose the order of play throughout the playoffs.