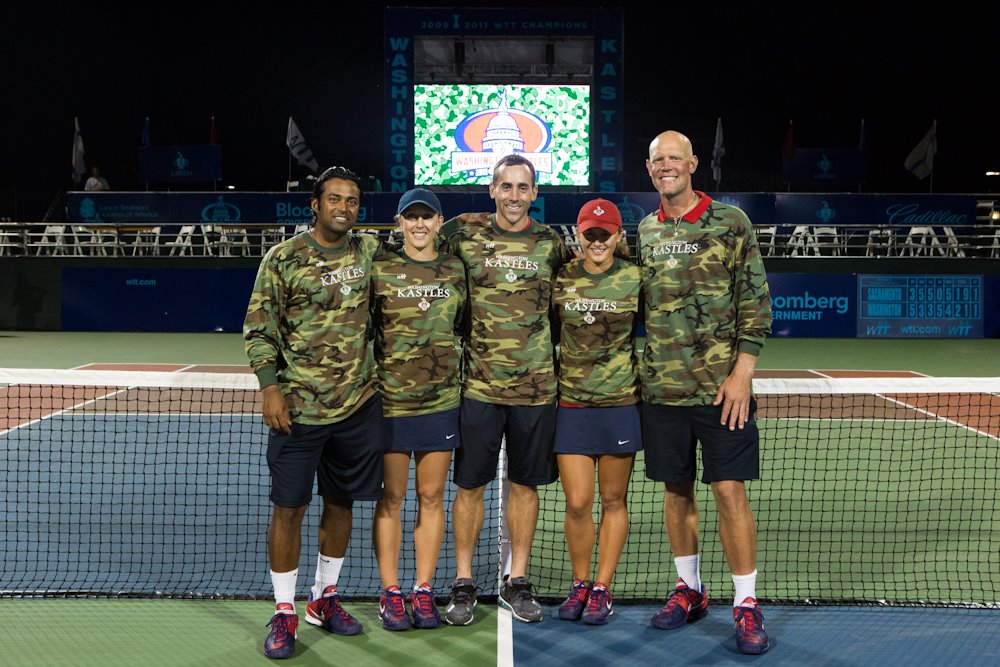 If they keep winning matches like they did against the Sacramento Capitals on Wednesday, the Washington Kastles may never lose again.

Washington’s 6-0 men’s singles player Bobby Reynolds suffered his first defeat of the season, as did the 6-0 mixed doubles team of Leander Paes and Anastasia Rodionova.

But despite the best efforts of a motivated Capitals team looking to end the Kastles’ historic winning streak, Washington emerged with its 23rd consecutive victory, dramatically defeating Sacramento 21-19 in overtime.

The Kastles’ winning streak has topped the NFL and NHL records for most consecutive games won — 21 by the 2003-04 New England Patriots and 17 by the 1992-93 Pittsburgh Penguins respectively.

A stirring, shutout singles performance by Anastasia Rodionova provided the Kastles with enough cushion to take a two-game lead into overtime on Wednesday, which they clinched on their sixth match point when Rodionova hit a service winner.

It was a coming-out party for the newest Kastle with thousands of her biggest fans there to share the occasion. After hitting the serve that kept the Kastles’ streak alive, Rodionova raised her arms in unison with the crowd before Paes raised Rodionova above her shoulders.

Men’s doubles was always going to be an entertaining set, featuring former World No. 1s on opposite sides of the court: the Kastles’ Paes and Capitals’ Mark Knowles.

It took only two points for Paes to show his best, blocking back a laser-like forehand from Sam Querrey for a winner.

After three straight holds to start the set, the Kastles earned a 3-all point in the fourth game on Knowles’ serve. Washington was unlucky when Paes hit a backhand volley that clipped the net and sat up for Querrey to crush a forehand winner.

Reynolds, Querrey and Paes held easily again to make the score Washington 4, Sacramento 3 and put the pressure back on Knowles.

This time, the Kastles’ took advantage of their opportunity to break the four-time Grand Slam champion as Paes called off Reynolds and cranked a down-the-line backhand past Querrey.

In women’s doubles, Kastles’ sisters Anastasia and Arina Rodionova were playing to preserve the Washington lead before the much-anticipated men’s singles set between Reynolds and Querrey.

But when Asia Muhammad ran around her backhand in the fourth game and crushed a forehand return winner, she put Sacramento ahead in the set 3-1 and tied the match score at 6-6.

The Kastles broke back thanks to a careless service game from Muhammad, which included two double faults. And when Anastasia Rodionova blasted a backhand passing shot winner to make the set score 3-3, it appeared as though the Kastles had recovered momentum.

But after Yasmin Schnack held, Arina Rodionova fell behind 0-3 on her serve with the set score at 3-4. ‘Hot Rod’ rallied to 2-3 behind a pair of strong forehands directed at Muhammad. But she missed a forehand long on the Capitals’ third set point, evening the match after two sets.

Washington is tied with Sacramento 8-8.

Reynolds (6-0) and Querrey (2-0) each entered tonight’s match with an undefeated record, so their singles set had fans on the edge of their seat.

From the start, it did not disappoint. Reynolds held serve at love in the first game with an ace up the service tee, hollering “YEAH!” after the ball whizzed past Querrey.

Querrey silenced the crowd momentarily with a pair of forehand winners in his service game, but Reynolds worked his way to a 3-all deciding point nevertheless.

With Querrey’s record-breaking serve on the line (he once hit 10 straight aces), the former Top 20 player ran around a backhand and cranked a forehand winner up the line that Reynolds had no chance of retrieving.

So close to breaking Querrey for a 2-0 lead, Reynolds suffered a costly letdown in the following game. He fell behind 0-3 in the game after arguing a service call with the chair umpire, and was broken at 2-3 when Querrey pushed him far behind the baseline to set up a drop shot winner.

From that point on, the two Americans matched each other big serve for big serve until Querrey held at love to win the set 5-3 and give Sacramento a two-game advantage going into halftime.

Anastasia Rodionova has hit her stride in the second week of the WTT season, highlighted by her singles performance on Wednesday.

She broke Asia Muhammad to begin the women’s singles set, held serve at love with a let-cord winner and then converted a 3-all point with a deep forehand return to open up a 3-0 lead.

Within a matter of minutes, the Kastles were back in the lead 14-13 and Sacramento coach Wayne Bryan was scrambling to substitute Schnack in for Muhammad.

It made no difference as Rodionova hit a crosscourt forehand winner for 4-0 before taking her third 3-all point of the set when Schnack netted a backhand.

In only 17 minutes, the newest Kastle had brought the fans to their feet and put Washington ahead for good with a 5-0 women’s singles win.

Sacramento substituted once again in mixed doubles after Querrey held for 1-1. Having benefited from Querrey’s big serve in their first service game, the Capitals inserted Mark Knowles to provide 20 years of doubles experience.

The move paid off, but not necessarily because of which Sacramento man was on the court. It was Schnack who emerged as the most valuable player of the set, breaking for 2-1 with a wicked backhand angle that nearly pushed Anastasia Rodionova into the Kastles’ bench.

Serving on a 3-all point in the following game, Schnack came up with another sharply struck shot, spinning a serve out wide that Rodionova could not return.

After Paes held for 2-3, the serve came back around to Knowles — where Querrey would have been serving. The Kastles broke for 3-3 when Paes dipped a return at Knowles’ feet and the Capital’s volley teetered off the net and back onto Sacramento’s side of the court.

Rodionova took care of her serve to put the Kastles ahead 4-3, and Washington arrived at its first match point in the following game when Paes hit a stirring forehand winner from one corner of the court to the other.

With Schnack serving at 3-4, 3-all, the set was either bound for a tiebreaker if the Capitals won the next point, or over and done with if Washington won it

Schnack’s serve skipped off the net cord and landed in, putting Rodionova in an awkward position to return from. Her forehand hung high in the air, giving Knowles time to slam an overhead out of the Kastles reach and force a tiebreaker.

Paes, Knowles and Rodionova each won two points on serve in the tiebreak, which put Washington ahead 4-2 with three more match points to play with.

Again, Schnack came through in the clutch for the Capitals, silencing the Kastles’ fans who were on their feet for all three match points with a down-the-line forehand winner, a service winner and another strong serve that set Knowles up for a put-away at net.

Because the trailing team won the final set, the Kastles and Capitals headed to overtime.

Knowles served in the first game after regulation, and he was pushed to 3-all and a fifth Kastles’ match point when Paes hit a crosscourt forehand winner. The Capitals once again prolonged the match when Knowles struck a backhand deep and flat that forced Paes into an error.

Sacramento had cut the Washington lead to one, and if Knowles and Schnack could break Rodionova’s serve, they would send the match into a winner-take-all Supertiebreaker.

Down-the-line winners by Knowles and Schnack made the game score 2-2, creating a tension-filled moment for every player and fan inside Kastles Stadium at The Wharf.

Playing to potentially end the Kastles’ eternal winning streak, Knowles cracked his return at Paes, who blocked a volley back. Knowles followed with a top spin lob over Paes’ head that bounced up high to Rodionova’s backhand, drawing a short ball from the newest Kastle.

With the shot he’d been waiting for, Knowles mistimed a forehand and shanked the ball wide, lowering his head for a good five seconds after missing a golden opportunity.

It’s the second time this season that the Kastles’ newcomer has saved Washington’s streak down the stretch of a match. She broke a 15-15 tie with a fifth-set singles victory on the road against Springfield on July 11th.

The Capitals (4-3) remain in first place in the Western Conference, half a game ahead of the Orange County Breakers, two games in front of the Kansas City Explorers and three games ahead of the Springfield Lasers.