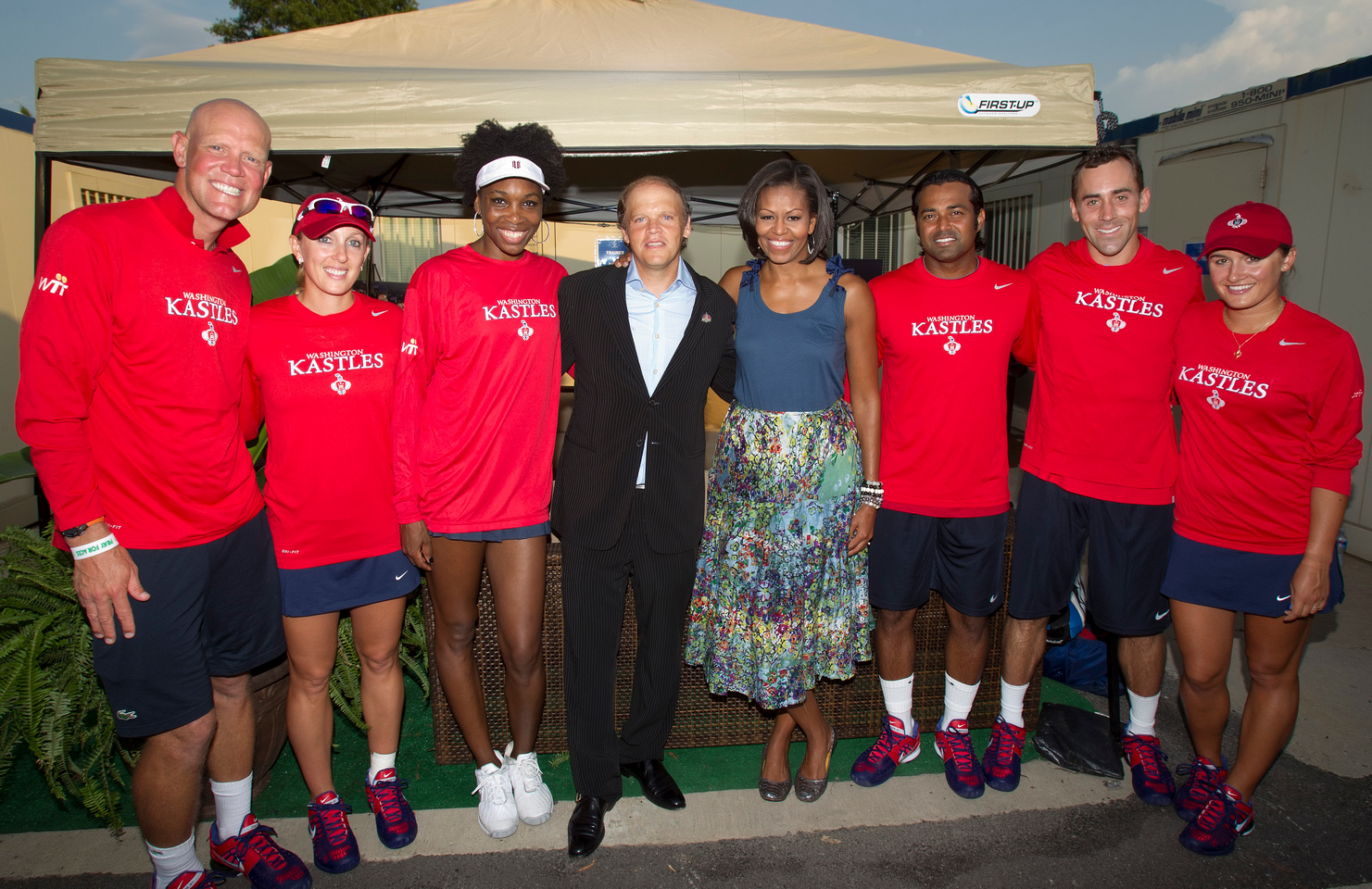 For the second straight season, the most famous family in Washington watched its hometown Kastles play the Boston Lobsters. And just as in 2011, the Kastles did the Obamas proud.

Michelle, Malia and Sasha Obama got into the Kastles Stadium spirit on Monday, cheering enthusiastically along with the rest of the capacity crowd as the Kastles crushed the Boston Lobsters 20-11. Washington improved to 6-0 on the season and increased its winning streak to 22 matches dating back to the 2011 opener.

Washington hasn’t had any problems winning matches when the First Family isn’t around. But rarely do they win as overwhelmingly as they have the two times that the Obamas have been at Kastles Stadium at The Wharf.

Michelle Obama and her two daughters were also on hand when the Kastles defeated the Lobsters 25-10 on July 7, 2011.

With a 13-game halftime lead, Washington was performing at a level most tennis players can only dream of. The largest margin of victory in World TeamTennis history is 21 games, and through three sets the Kastles were on pace to break that record.

But Irina Falconi brought life to the Lobsters by winning women’s singles in the fourth set. That didn’t stop the Kastles’ closer Reynolds from finishing Boston off with his sixth straight men’s singles victory to start 2012.

Washington has now won 17 of 18 sets this season in which Reynolds, Paes or both Kastles’ men have been on the court.

From the very first game, it was clear that the Kastles were the superior team in doubles. Paes held serve when Williams followed a backhand overhead with a forehand put-away at net between Eric Butorac and Carly Gullickson-Eagle.

With Butorac serving at 0-1, Venus drew roars from the crowd — including the Obamas — with a sensational point that she won single-handedly. The former World No. 1 in singles and doubles followed her return with three straight volleys, each harder and closer to the net than the previous one, until she crushed an overhead winner.

The Kastles went on to break Butorac for a 2-0 lead, which Williams made 3-0 by hitting an ace to hold at love.

Though Gullickson-Eagle held for 1-3, Williams hit three successive winners to help Paes hold for 4-1. With Williams stepping into the court and timing her returns perfectly off the left-handed Butorac’s big serve, she hit one last winner to break the male Lobster and claim the set for Washington.

The Kastles never looked back.

Though three minutes separated mixed doubles from women’s doubles, it was as if Williams never stopped playing.

She immediately broke Falconi’s serve for the Kastles with a deep crosscourt backhand that jammed the 22-year-old Lobster into a forehand error.

Rodionova got in on the fun during Williams’ first service game, capturing three straight points with three consecutive volley winners: a drop shot, followed by an overhead smash, followed by a crosscourt forehand angle.

After Washington held for 2-0, the Kastles broke again when Williams blasted a forehand return at Falconi. The sheer pace of Williams’ shot caused the ball to bounce well long off of the Lobster’s strings.

After holds by Rodionova and Falconi, Williams clinched the second set 5-1 when she attacked a short Falconi volley with a winner down the middle of the court.

In the most competitive point of the men’s doubles set, Paes and Reynolds held for a 1-0 lead following a back-and-forth exchange at the net that drew “Oohs” and “Awws” from the Obamas and their thousands of fellow Kastles fans.

All four players were at the net to volley before all four men were pushed back to the baseline to retrieve lobs during the rally, which Reynolds ended with a well-placed winner as both Lobsters moved to cover the other side of the court.

Paes and Reynolds broke Jan-Michael Gambill’s serve in the second game with the same formula that has served them well time and again since they began teaming in 2010: Reynolds hit a low return that forced Gambill into popping up a volley that Paes intercepted for a winner.

The Lobsters never recovered, conceding a rare 5-0 set to Paes and Reynolds that opened up an insurmountable 13-game Kastles’ lead.

Coming out of halftime, Williams was unable to resurrect the form she showed in the first two sets of the evening.

As she’s done in each of her past five appearances with the Kastles, Williams tried to give fans everything she had by competing in three sets. But living with the auto-immune disease Sjogren’s Syndrome has made the job Williams has been doing for 18 years — playing professional tennis — much more difficult.

It showed in singles when the three-time Olympic gold medalist hit three straight double faults in the opening game to give a break to Falconi. Williams would double fault two more times in the set.

Falconi capitalized by making Williams move with a variety of strokes. She earned a set point by hitting a drop shot to force Williams forward, then easing a crosscourt forehand winner into the open corner.

A Falconi forehand return winner sealed the set 5-0 for the Lobsters, but the Kastles still held a daunting eight-game advantage.

It’s hard to improve coming off of a 16-0 season, but one Kastle has made major strides since last season. Washington’s men’s singles star Reynolds is boasting a noticeably bigger serve, which has now helped him win six consecutive sets to start the season, including four in tiebreaks.

Reynolds’ service success continued against Gambill as the Kastle held his serve routinely, while the Lobster struggled to hang on. Gambill saved five break points in all during the set.

A majority of points on Reynolds’ serve ended in 1-2 shots, but Gambill needed to hit about 20 to win one memorable point on his serve. The Kastles’ closer retrieved an overhead smash and several would-be winners before the Lobster finally hit a shot that an outstretched Reynolds could not get back.

Reynolds had won 15 of 16 points on his serve as he stepped to the baseline at 3-3 in the set and 3-0 in the game. To make light of his return struggles, Gambill hollered across the net for Reynolds to warn him as to where he was going to hit his next serve.

Both players and benches laughed as Reynolds promised an ace was coming. Instead, the Kastle double-faulted, only to deliver with an ace one game later.

After Gambill held for 4-4, Reynolds took the only break he needed in the tiebreaker with a scorching down-the-line forehand winner.