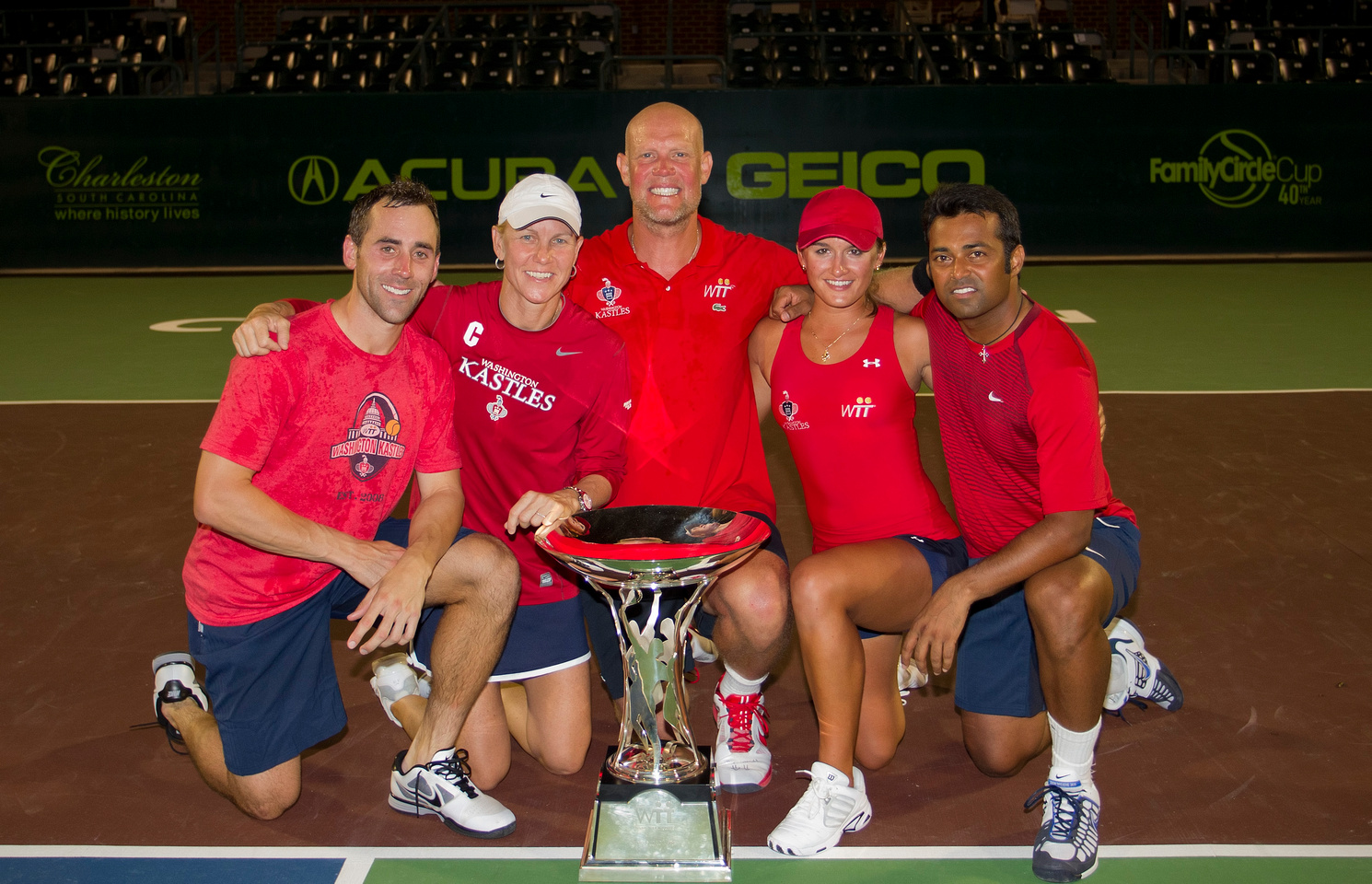 The Washington Kastles completed the first perfect season in the 36-year history of World TeamTennis early Monday morning, overcoming three rain delays and over eight hours of on-and-off tennis to defeat the St. Louis Aces 23-19 in the WTT Finals.

The Kastles added a second King Trophy to their 2009 WTT title when Bobby Reynolds won his ninth championship point at 1:03 am.

It was a frantic, yet fitting finish to the Kastles’ 16-0 season, which featured three Supertiebreakers, five one-game victories and six match points saved.

The Kastles had another close call in their marathon championship match against the Aces, which went to overtime before Reynolds won a 3-all point by jamming Roman Borvanov with a service winner.

All four Kastles had a hand in the team’s historic victory. After St. Louis won the opening set of mixed doubles 5-3, Arina Rodionova and Rennae Stubbs shocked Liezel Huber and Tamira Paszek 5-0 in women’s doubles.

Men’s doubles followed with Reynolds and Leander Paes avenging their July 15 loss to St. Louis, defeating Borvanov and Jean-Julien Rojer 5-2. That gave the Kastles a 13-7 lead at halftime, which Rodionova extended to 18-11 with a 5-4 win over the world No. 42 Paszek in women’s singles.

Already the 2011 WTT Female Rookie of the Year, Rodionova was named the WTT Finals Most Valuable Player after Reynolds closed Borvanov out in overtime to clinch the Kastles’ victory.

The Kastles escaped trouble in the opening game, with Paes saving three straight break points to hold for 1-0. From 1-3 in the game, Stubbs attacked a high ball to draw an error from Rojer, and Paes hit back-to-back winners.

But the Aces overcame those missed opportunities by winning 12 of the next 14 points to take a 3-1 lead, led by an impressive run by Rojer. The native of the Netherlands Antilles held for 1-1 with a service winner, broke Stubbs with a passing shot that the Aussie could not handle, and hit two winners to help Huber hold for 3-1.

That’s when the rains came, forcing a delay of about 90 minutes. When players returned to the court, the Kastles won one game game before rain returned, prompting another stoppage of play that lasted nearly as long as the first delay.

Upon the resumption, Paes quickly provided the Kastles with two break points at 2-3 on Rojer’s serve after hitting a picture-perfect forehand lob that neither Ace could track down. But Huber put volleys away to save both break chances and give St. Louis a 4-2 lead.

The Aces appeared ready to clinch the set in the following game, earning an 0-3 advantage on Stubbs’ serve. The Kastles rallied to win an important game, holding for 3-4 when Stubbs hit an unreturnable volley, Paes undercut a drop volley winner and both Aces missed second-serve returns.

Huber, however, rebounded to serve the set out when Paes missed a forehand return long, giving St. Louis an early 5-3 advantage.

In women’s doubles, the Kastles made a concerted effort to target Paszek, who reached the singles quarterfinals at Wimbledon but is not known for her doubles prowess. The strategy paid off from the start when the Kastles broke Huber to take a 1-0 lead. In the game, Stubbs directed hard, flat shots repeatedly at Paszek, who made three volley errors, capped by an extended exchange on break point when all four players approached the net before Paszek missed a high ball.

Down 0-1, the Aces had two chances to break back, but Stubbs saved the first with a stab forehand volley winner, and then Rodionova won a baseline exchange with Paszek to give the Kastles a 2-0 lead.

With momentum clearly on Washington’s side of the court, the skies opened once again, forcing the third suspension of play in the first two sets. Forty minutes later, the set resumed and the Kastles picked up right where they left off. They completed a 5-0 shutout by breaking Huber when Paszek netted a backhand.

It was a startling loss for Huber who went 14-0 in women’s doubles during the regular season, but 0-2 at WTT Championship Weekend alongside Paszek. Though the players changed in the third set, little else did when Paes and Reynolds met Rojer and Borvanov in men’s doubles. The No. 1 men’s doubles team in the league gave hundreds of Kastles fans in attendance plenty to cheer about.

Reynolds hit an ace off the net cord on the first point of the set, Paes followed with an emphatic backhand volley smash, and the Kastles never looked back.

After Reynolds held in the first game, he dipped a backhand return at Rojer’s feet, drawing a half-volley error on break point to take a 2-0 lead. In the third game, Reynolds hit a leaping overhead winner to help Paes hold at love.

Now leading 3-0 in the set and 11-5 in the match, the Kastles had won eight consecutive games to take control of the WTT Finals.

Borvanov ended Washington’s streak when he held serve on a 3-all point, and then Paes and Reynolds hit two winners each to extend their lead to 4-1.

Rojer held for 2-4, and the Aces edged to 2-2 when Paes served for the set. The WTT Male MVP spun a service ace past Borvanov to earn two set points, but the Aces forced a 3-all point when Rojer hit a return winner on the sideline off a second serve from Paes.

The Aces elected for Rojer to return again on the deciding point, which would either give the set to Washington or extend it for St. Louis. This time, Paes added spin to his second serve to draw an error from the Ace.

Six hours after the match began, Washington entered halftime with a 13-7 lead.

Following a brief break, a much-anticipated singles set pitted Rodionova, the WTT Rookie of the Year, against Paszek, a 2011 Wimbledon quarterfinalist.

Paszek held at love with an ace down the tee, then benefitted from two double faults by Rodionova to take a 2-0 lead.

The Austrian Paszek returned the favors in the following game, double-faulting twice to allow the Russian Rodionova to break back for 1-2. In her next service game, Rodionova rallied from 1-2 to 3-2 with an ace out wide and a backhand volley winner. Though she missed a forehand to bring up a 3-all point, she evened the set at 2-2 by attacking Paszek’s backhand with two straight inside-out forehands, the second of which wrong-footed the Austrian for a winner.

That brought the crowd to its feet, with fans from DC erupting into a chant of “Let’s go Kastles.”

After a hold by Paszek, Rodionova saved two break points by beating Paszek at her own game, outlasting the Austria in consecutive rallies from the baseline.

The Kastle continued to play at a higher level than her world ranking of No. 184 would suggest. She ran around her backhand to belt an inside-in forehand return winner to reach break point for a 4-3 lead, converting when she approached the net to draw a Paszek pass wide. With Paes offering a towel and words of encouragement between points, Rodionova reached set point at 4-3, 3-all.

A 14-shot rally ensued as each player hustled far and wide to retrieve shots that appeared to be winners. Paszek ended the baseline exchange by hitting a drop shot, and then passed Rodionova with a crosscourt backhand to save the set point and force a tiebreak.

Paszek won the first two points of the tiebreak before Rodionova took the offensive and aggressively won the last five. She hit an ace, a winner and three forehand approaches to draw Paszek errors, wrapping up the upset 5-4(2) and giving Washington a commanding 18-11 lead with one set left.

For St. Louis to overcome its seven-game deficit, Borvanov would have to dominate Reynolds, the Kastles’ closer in 10 of their 15 wins coming into the finals. Neither player earned a single break of serve in the fifth set, though Reynolds had a chance to both break and clinch a Kastles title with Borvanov serving at 3-4, 3-all.

Borvanov hit a flat first serve down the tee for a winner to save the championship point and force a tiebreak.

As in the set, there were no service breaks in the tiebreak, with Reynolds taking a 4-2 lead for three more match points. Borvanov saved the first with an ace, and the next two by outdueling Reynolds in a pair of 12-stroke rallies that ended when the Kastle made errors. Just like that, Borvanov had won the set, but Washington remained in a winning position with a 22-16 lead going into overtime.

After Borvanov held to make the match score 17-22, Reynolds fell behind 1-3 on his first service game of overtime. He rallied with a backhand passing shot that drew a Borvanov volley error and a heavily-spun kick serve that Borvanov couldn’t retrieve. Now serving at 3-all, Reynolds held his fifth championship point of the night, but the first on his serve. Borvanov bravely approached the net and guessed right when Reynolds hit a down-the-line backhand pass, stretching his racquet and gently guiding a forehand drop volley winner cross court to cut the Kastles’ lead to 22-18.

Borvanov won his third straight game in overtime to make it 19-22, as Kastles fans and Reynolds’ teammates raised their voices in support of the No. 2 men’s singles player in the league. Reynolds responded well, hitting two service winners and drawing a Borvanov backhand error to take a 3-0 lead in the fourth game of overtime, earning four more championship points. He’d need all of them.

At 3-0, Reynolds approached the net with a solid inside-out forehand approach before smashing an overhead that many in attendance thought would be the final shot of the match. Coach Jensen was one of those people, flinging a Powerade high into the air to celebrate. But Borvanov managed to get his racquet on the ball and lob it back to Reynolds’ side of the court, just as Jensen’s Powerade landed.

Reynolds put a second overhead away, which would have won the match, but the Kastles were penalized the point because of the hindrance caused by Jensen’s Powerade. It was an honest mistake from an exuberant coach, whose positive energy and enthusiasm led him to Coach of the Year honors.

But it forced Reynolds to regroup and gave Borvanov new life. The Ace hit an overhead winner of his own with Reynolds serving at 3-1, and the Kastle missed a backhand at 3-2 to bring up another 3-all point. Now on championship point No. 9, Reynolds stepped to the service line and placed his first serve perfectly down the middle of the box — the ball bursting off the court and into Borvanov’s body.

Borvanov tried to get around the ball and hit a backhand, but he could not get a full swing and the ball bounced meekly off the edge of his racquet. That elicited a celebration from Kastles’ fans and players who witnessed their fair share of dramatic finishes during the team’s surreal run to 16-0.

Rodionova received the WTT Finals MVP award for her efforts in sweeping the women’s singles and doubles sets.

But each Kastle played his or her part in overcoming the rain and the Aces, with Stubbs singling out Paszek in women’s doubles, Paes serving out the men’s doubles set and Reynolds saving his best serve for his ninth championship point.

The 2011 Kastles will go their separate ways this afternoon, but they will be together forever following an un paralleled season that will live on in WTT record books.