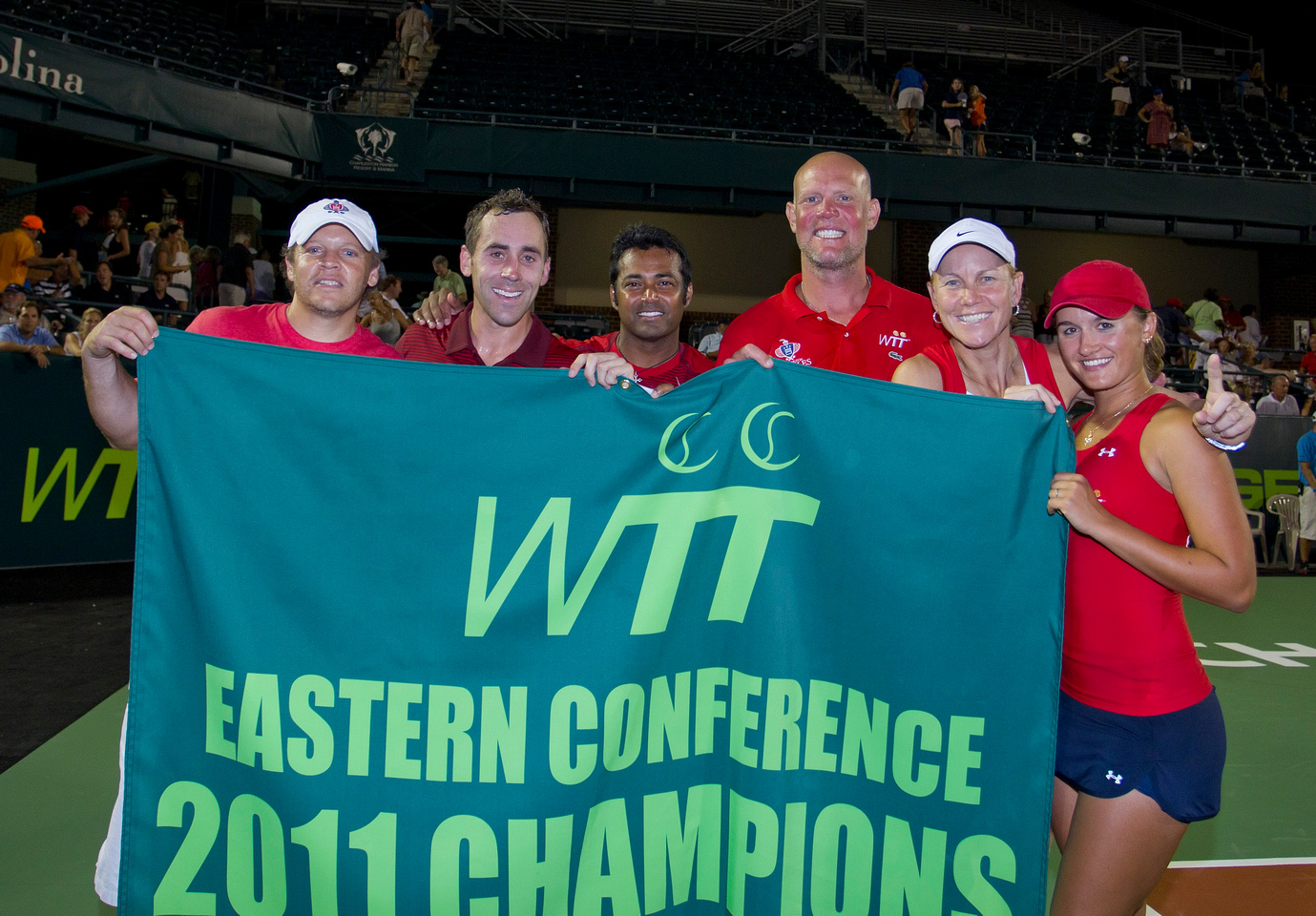 Having completed a perfect regular season on Thursday, the Washington Kastles are now one win from making more history. Washington reached its second WTT Finals in three seasons by sweeping the doubles sets en route to a 23-15 win over Boston in the Eastern Conference Championship match Friday.

If the 15-0 Kastles defeat either the St. Louis Aces or Sacramento Capitals on Sunday at 5 pm, they will become the first team in the 36-year history of World TeamTennis to finish both the regular and postseason undefeated.

Though Friday’s match was played in Charleston, South Carolina, it was clear from the crowd reaction to player introductions that the Family Circle Tennis Center was Kastles Kountry. Red, white and blue shirts and “Refuse to Lose” placards were spread out across Stadium Court as the undefeated Kastles entered.

The Kastle-friendly crowd provided just another obstacle for the Lobsters to overcome after the team traveled across the country early Friday following a Thursday night road match in Newport Beach, California.

WTT Coach of the Year Coach Murphy Jensen set the order of play, sticking with the winning formula that helped the Kastles win all seven of their home matches during the regular season.

That meant that mixed doubles led off, and Leander Paes and Rennae Stubbs gave their team the start that Coach Jensen envisioned. Paes and Stubbs won their eighth straight set in mixed doubles, defeating Eric Butorac and Mashona Washington of the Lobsters 5-2.

After Paes held at love, the Kastles earned a break point on Butorac’s serve in spectacular fashion. Stubbs lifted a lob over the leaping Butorac, who managed to hit a between-the-legs shot back at the Kastles. But Paes was ready at the net, knifing an inside-out backhand winner past Washington.

The Kastles broke the Lobsters immediately thereafter to take a 2-0 lead when Paes sliced a backhand return at Butorac’s feet to draw a half-volley error.

Stubbs consolidated the break in the following game, holding with a service winner that clipped the net cord and jammed the ex-Kastle Washington.

The Lobsters got on the board when Washington held on a 3-all point, cutting the Kastles lead to 3-1. Paes responded with another easy hold, snapping a backhand volley that hit Washington in the wrist. Paes lost just one of nine service points in the set after being named the 2011 WTT Male Most Valuable Player before tonight’s match.

Boston’s Butorac held for 2-4 before Stubbs served the set out for the Kastles when Washington missed a backhand long.

The Kastles kept their momentum in women’s doubles when Stubbs and 2011 WTT Female Rookie of the Year Arina Rodionova defeated Washington and Irina Falconi 5-1.

Rodionova hit a sharp crosscourt angle to draw a Washington volley error, breaking the Lobsters’ serve and spirit in the very first game of the set.

Stubbs served first for the Kastles, and was forced to play a 3-all point when Falconi hit two great volleys to set Washington up for an overhead winner. The Lobsters were unable to break, however, because Stubbs hit a deep first serve on the deciding point that allowed Rodionova to swing freely at a forehand volley, which she hit past Falconi for a winner.

Falconi won a 3-all point on her serve to bring Boston to 1-2 in the set, but the Lobsters would not get any closer to catching the Kastles.

Kastles fans called for an ace from Rodionova in the fourth game, and the Russian obliged, blasting one down the service tee past Falconi en route to a 3-1 Kastles lead.

After another break of Washington’s serve, Stubbs closed the Lobsters out 5-1 with a strong first serve, which Rodionova followed with a backhand overhead winner.

The Kastles took a 10-3 lead into men’s doubles, which pitted Paes and Bobby Reynolds against Butorac and Jan-Michael Gambill for the third time this season. The Kastles won the first two meetings, and completed the sweep with a 5-2 victory in the Eastern Conference final.

Following five holds to open the set, Gambill found trouble in the sixth game, double-faulting to allow the Kastles to earn a break point. Reynolds converted by hovering over the net to intercept an overhead, which Gambill returned with an overhead of his own from far beyond the baseline. But the Lobster’s reply landed just long, giving the Kastles a 4-2 advantage.

Paes served the set out in a style very few players in the world can emulate, using the softest of touch to hit three consecutive volley winners before Gambill missed a return.

With Washington leading 15-5 at halftime, Lobster comeback hopes rested with Falconi and Gambill in singles.

Falconi inched the Lobsters slightly closer with a 5-4(2) win in women’s singles against Rodionova, surviving a set that featured six service breaks in eight service games.

Having defeated Rodionova in Boston by the same score, the 21-year-old Falconi frustrated the Kastle once again with a wide variety of spin, pace and placement.

Down 0-1, the Lobster earned her first break point of the set with a crisp crosscourt backhand slice that barely cleared the net before passing Rodionova.

That sparked a three-game run by Falconi, who took a 3-1 lead by increasing the speed of her shot with an inside-out forehand return that Rodionova couldn’t handle.

But the Rookie of the Year wouldn’t go down without a fight. Following three straight breaks from 1-3, Rodionova saved three set points at 3-4 to hold for the first time in the set and force a tiebreak.

The Lobster rebounded with three forehand winners in the tiebreak to clinch the set 5-4(2). On her first set point, Falconi followed a down-the-line forehand drop shot with a well-angled crosscourt forehand winner.

Her two victories over Rodionova were the Lobsters only two sets won against the Kastles all season — a total of 14 sets going into Friday’s final event of men’s singles.

Gambill made it three out of 15 for Boston, defeating Reynolds 5-3 to force overtime after an impressive display of power tennis.

The Lobster broke serve in the first game of the fifth set, but appeared likely to lose his lead serving at 3-2, when Reynolds won the first two points of the game. Gambill had other ideas, pounding four consecutive service winners to take a 4-2 lead.

In the next game, Reynolds saved two set points with back-to-back aces — the first down the tee and the second out wide.

But the Kastle could not complete a comeback in the set, falling 5-3 when Gambill surprised him with a second serve ace.

Now leading 22-15 in the match, the Kastles counted on Reynolds to win one game in overtime to clinch victory for the team.

The Kastles’ closer did just that, taking the final three points of the match with a crosscourt backhand winner, a crosscourt forehand winner and an inside-out forehand winner. That sparked a celebration in Charleston from a large contingent of fans who drove and flew from DC earlier Friday.

Washington now awaits its opponent in Sunday’s WTT Finals, with the Aces and Capitals due to play today at 5 pm.