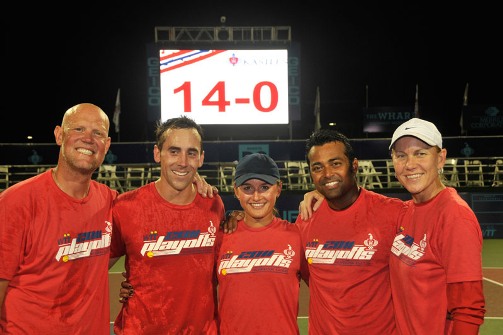 With one final service winner from Bobby Reynolds, the Washington Kastles became the second team in 36 years of World TeamTennis to complete a perfect regular season, defeating the Philadelphia Freedoms 25-11 in front of a sold-out crowd at Kastles Stadium at The Wharf.

Before Thursday, the only franchise to have ever finished a WTT season 14-0 was the 1994 Newport Beach Dukes, who were unable to win the WTT Finals that year.

The Kastles could become the first team to finish a regular and postseason undefeated if they win the Eastern Conference Championship tonight and capture the King Trophy on Sunday.

The historic night opened with mixed doubles as Leander Paes and Rennae Stubbs brought a six-set winning streak into their event against Nathan Healey and Liga Dekmeijere. Make that seven.

The Kastles needed only one break point to win the set 5-2, and it came with Healey serving at 2-3. Paes guessed right on the Freedom’s first serve and blasted a forehand return at Healey’s feet to draw a volley error.

With Stubbs serving for the set at 4-2, Healey returned the favor with a forehand return winner past Paes to earn a 3-all point. But Stubbs jammed Dekmeijere with a body service winner to win the event for the Kastles.

Stubbs broke the match wide open in the second set with a near-perfect performance, flying around the court and putting away volleys to win women’s doubles 5-1 with Arina Rodionova.

Stubbs hit a stab forehand volley winner to earn a break point in the first game, which the Kastles converted when Dekmeijere netted a forehand.

With Rodionova serving at 3-all in the following game, Stubbs hit her first volley into an open area of the court, which set her up for an easy overhead winner, giving the Kastles a 2-0 lead.

Maryland native Beatrice Capra served for the Freedoms at 0-2, but she too couldn’t solve Stubbs and Rodionova. On one point in the game, Stubbs made three straight reflex volleys — the last off the let cord — to draw a forehand error from Dekmeijere.

If she wasn’t putting a volley away at the net, Stubbs was hitting a strong approach to get there. She hit an overhead winner to give the Kastles another break point, which they converted when Capra hit a lob long.

The Stubbs shotmaking show continued in the fourth game when the Aussie held for 4-0 by digging a volley off the DecoTurf surface before finishing with a swinging forehand volley winner.

Though Dekmeijere got the Freedoms on the scoreboard in the fifth game, the Kastles wrapped the set up 5-1 when Rodionova hit a remarkable overhead from behind the baseline, rushing Capra into a backhand error.

Paes picked up where Stubbs left off with one spectacular shot after another in men’s doubles, extending the Kastles lead from 10-3 to 15-6 when he and Reynolds defeated Healey and Brendan Evans 5-3.

The set stayed on serve until the final game, but Paes was on another level from start to finish.

In the second game, he handled an Evans overhead by hitting a reflex backhand volley that drew an error from Healey.

Paes topped that shot at 2-2 when he hit a crosscourt backhand overhead smash off of his back foot, generating so much pace that Healey swung and missed at his volley attempt.

Two games later, Paes dipped even deeper into his bag of tricks, pulling off a behind-the-back backhand volley that kept alive a point that the Kastles eventually won.

Paes won all eight of his service points in the set, giving the Kastles a 4-3 lead on his second easy hold with a 103 mile-per-hour service winner. In the next game, Paes hit two winners, and Reynolds made two strong returns, to help the Kastles break Healey, win the set 5-3, and take a 15-6 lead overall.

A women’s singles set followed featuring the local favorite Capra against the Kastles’ rookie Rodionova, with the crowd clearly in favor of the player they’ve come to know as “Hot Rod”

Both players struggled with their rhythm in the early stages, exchanging service breaks to 2-2.

That’s when Rodionova found another gear, cracking three winners before breaking for 3-2 when Capra netted a forehand. “Hot Rod” held for 4-2 by retrieving a drop shot and guiding a forehand across the court and inside the sideline for a winner on game point.

Though Capra held for 3-4, Rodionova served out Washington’s fourth straight set after hitting a down-the-line forehand winner, and then carving a crosscourt overhead winner.

That gave the Kastles’ closer Reynolds a 20-9 lead going into men’s singles. And just as he’d done eight times before this season, Reynolds sealed a Washington win in the final set of a match, defeating Brendan Evans 5-2.

With chants of “Bobby” and “MVP” ringing from the capacity crowd, Reynolds took the first break of the set and never looked back.

Leading 2-1, Reynolds broke serve by sprinting to retrieve a drop shot, and then punching a down-the-line forehand winner. Reynolds and the fans seemingly leapt into the air at the same time to celebrate as Evans blasted a tennis ball out of the stadium.

In the following game, Reynolds won the point of the set by withstanding three lobs from Evans before finally smashing an inside-out overhead winner. That prompted Paes to rush onto the court and shine Reynolds shoes with a towel.

Evans held for 2-4, leaving Reynolds to serve out the set, match and perfect regular season. He did so at love, bashing a service winner down the tee on his first match point before being lifted up by Paes.

Following an intimate team huddle with Coach Murphy Jensen, the undefeated team took a victory lap around Kastles Stadium at The Wharf while holding up a WTT banner that read “2011 Best Record”.

There is little time for the Kastles to celebrate, however, because the biggest two matches of the summer still await.

Washington will meet Boston in the Eastern Conference Championship match tonight at 7 pm in Charleston, South Carolina. The winner of that match will play the Western Conference champion on Sunday at 5 pm in the WTT Finals.