Kastles Save Five Match Points To Stun Sportimes In Supertiebreaker 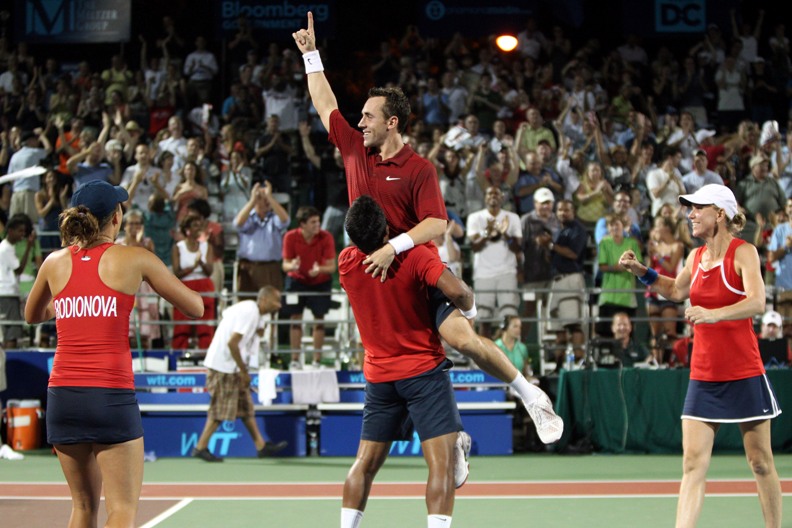 John McEnroe, Martina Hingis, the Eastern Conference Champion New York Sportimes and five match points were all stacked against the Washington Kastles on Tuesday night in a marquee meeting between the top two teams in World TeamTennis.

With so little separating the Kastles and Sportimes, the difference between winning and losing rested on the racquets of Washington’s men’s doubles team of Leander Paes and Bobby Reynolds.

As they’ve done all season long, the cardiac Kastles hit their best shots on the biggest points, pummeling first serves and putting away volleys to clinch a back-and-forth 20-19 victory at Kastles Stadium at The Wharf.

Washington won the match on the 6-6, winners-take-all point of a Supertiebreaker, when Reynolds connected on a 124 mile-per-hour first serve, setting Paes up for an overhead smash that the Indian slam-dunked over McEnroe’s head.

The Kastles improved to 7-0, extending their franchise-best start to the season, while the Sportimes fell to 5-2.

Washington and New York took fans on the Southwest Waterfront on a rollercoaster of ups and downs — highs and lows — all night long.

Former SEC rivals Reynolds and Jesse Witten started the proceedings in men’s singles. Reynolds, who played college tennis at Vanderbilt, broke open a close set with a series of scintillating strokes in the sixth game.

He followed overhead and backhand winners with an on-the-run forehand hit so hard that Witten had no time to react, netting a volley before double-faulting to concede a break to Reynolds. The Kastle wrapped the set up one game later with an inside-out forehand winner, defeating the Kentucky-grad Witten 5-2.

Women’s singles followed, featuring the red-hot Hingis against rookie Arina Rodionova of the Kastles. Hingis entered the match having won 26 of 31 games in women’s singles this season, including five straight games and a Supertiebreaker to clinch New York’s win over St. Louis on Monday.

In the early stages against Rodionova, the Swiss star showed off the secret to her success: variety. She pushed Rodionova far beyond the baseline with top spin before bringing her into the net with a short slice on one point, then ran the Russian ragged from side to side by hitting short angles on another.

But with Hingis leading 3-0, Rodionova adjusted her game by moving closer to the baseline and hitting flatter groundstrokes. She broke Hingis by winning an extended rally before holding for 2-3 with winners off her forehand and backhand. Though Hingis was victorious 5-2, those two games that Rodionova fought so hard to win would prove crucial in the latter stages of the match.

After Stubbs held serve on a 3-All point, she broke Hingis on another deciding point by hitting a down-the-line backhand return that caught McEnroe out of position. Poaching on the serve, McEnroe had no chance to make his volley when Stubbs aimed her return into the alley.

Paes gave the Kastles three set points with a drop volley winner that saw the ball die almost instantly after it landed on the Sportimes side of the court. Though the Sportimes forced another 3-All point, Stubbs struck a service winner to wrap up a 5-2 win and give Washington a 12-9 halftime lead.

New York cut the lead to two when Hingis and Katie O’Brien defeated Stubbs and Rodionova 5-4 in women’s doubles. All four players were broken to begin the match, and then all four players held serve to force a tiebreak, which Hingis capped with an ace and a volley that jammed Rodionova.

That set the stage for a men’s doubles finale between Paes and Reynolds of the Kastles and McEnroe and Travis Parrott of the Sportimes. For much of the event, McEnroe revived the form he used to win five Wimbledon and four US Open doubles titles.

In the third game, the American legend dipped a forehand return at Paes’ feet, forcing the Indian to pop a volley up that Parrott put away for a winner. That gave the Sportimes a 2-1 lead, marking just the third time in seven sets this season that the team of Paes and Reynolds has been broken.

At 2-2 in the following game, McEnroe hit a 111 mph ace out wide past Paes. Reynolds made him pay for his second serve at 3-2, cracking a crosscourt backhand return winner. But on a crucial 3-All point, Reynolds’ return dribbled off the net, allowing McEnroe to pummel a forehand that the Kastles could not retrieve.

Holds by Reynolds, and then Parrott, gave the Sportimes a 4-2 lead in the set, and tied the match score at 18.

That put Paes in a precarious position, serving to keep the Kastles’ undefeated season alive, while the Sportimes hoped to break to win the match outright.

With the Kastles trailing 1-2 in the game, McEnroe was due to return Paes’ serve. But when the ball bounced off the net cord, Parrott rushed across the court to hit the return, a legal move in World TeamTennis. The Kastles remained composed, and after Paes opened the court up with a sharp volley, Reynolds hit his own volley for a winner.

At 2-2, however, Paes made a rare unforced error at the net, missing a high volley to give the Sportimes two match points.

Neither McEnroe, nor Parrott, could convert as the 2009 WTT Most Valuable Player saved the first match point with a 114 mph service winner and the second with a 109 mph service winner, sending fans into a frenzy at Kastles Stadium at The Wharf.

But the Kastles hadn’t won just yet, and after McEnroe made two difficult low volleys look easy, the Sportimes won the set 5-3 and tied the match at 19 in the process. With the score dead even after five sets, a Supertiebreaker was played in which the first team to win seven points would win the match and assume first place in the Eastern Conference.

From 1-3 down, McEnroe and Parrott rallied to take a 6-4 lead and earn three more match points. But the Sportimes would need to break Reynolds at least once to taste victory.

With the entire crowd on its feet, Reynolds showed no signs of nerves. As Paes lined up in the I-formation, Reynolds nailed not one, not two, but three straight first serves down the tee. With Parrott and McEnroe lunging for the returns, Paes stayed put in the center of the court and swatted away all three volleys, sparking a wild celebration on and off the court.

By overcoming five match points — and 32 Grand Slam titles between McEnroe and Hingis — the Kastles completed the first half of the WTT season as the only undefeated team in the league.