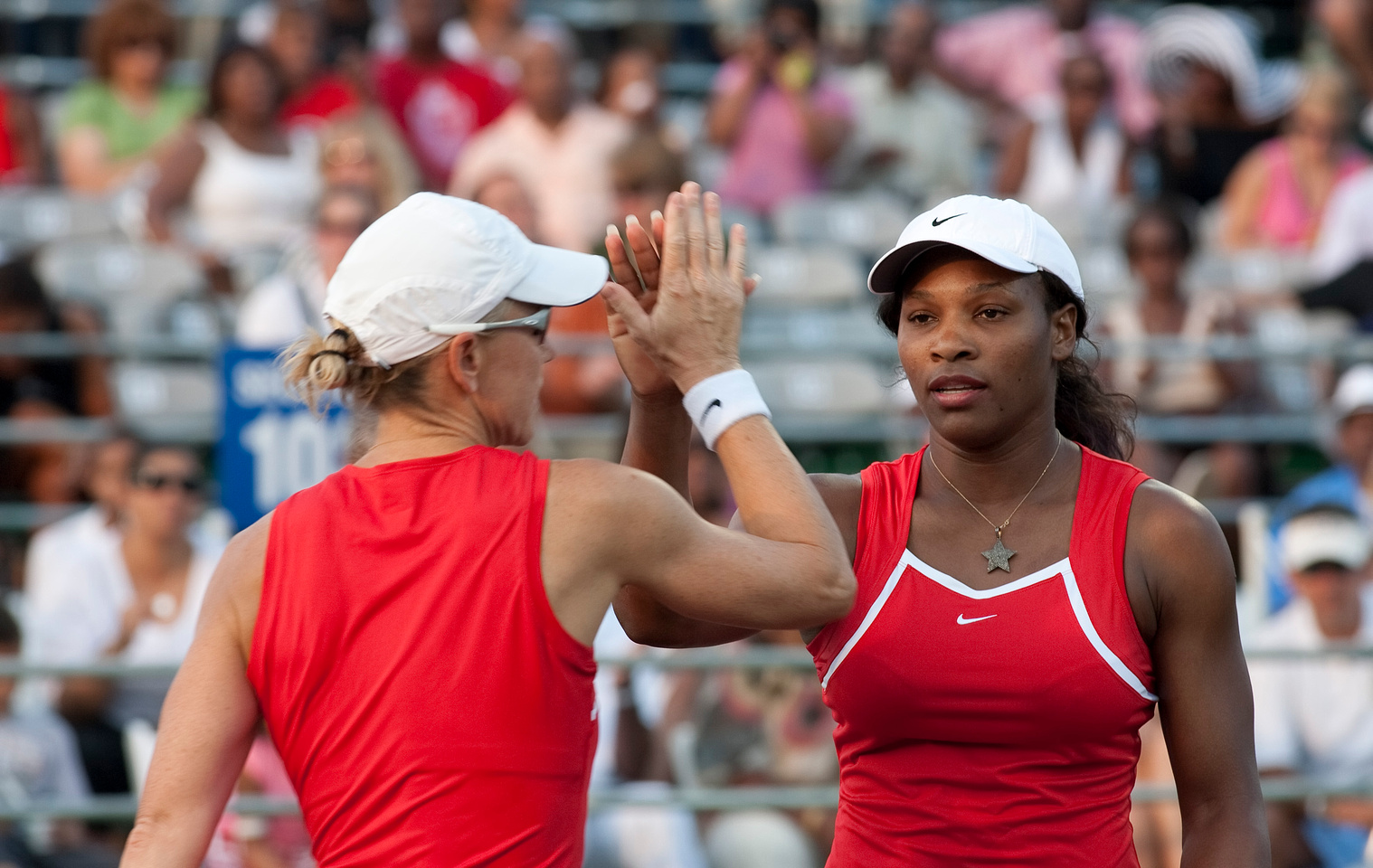 Michelle, Sasha and Malia Obama were among the supporters at the sold-out Kastles Stadium at The Wharf on Thursday, eager to witness Serena Williams’ first match in the United States since September 14, 2009.

Serena and the Kastles did not disappoint.

Washington routed Boston 25-10 to improve to 3-0 on the season, avenging a loss to the Lobsters in last year’s finale that prevented Washington from qualifying for the playoffs.

After exchanging breaks, Serena hit a sweet swinging backhand volley that Vandeweghe couldn’t handle, giving the Kastles a 3-2 lead. Vandeweghe double-faulted the next game away before Stubbs finished the Lobsters off 5-2 with two straight unreturned serves.

Men’s doubles pitted Leander Paes and Bobby Reynolds of the Kastles against Eric Butorac and Jan-Michael Gambill of the Lobsters. When the same two teams met in the 2010 finale, Butorac and Gambill handed Paes and Reynolds a 5-0 bagel.

But playing in front of a capacity crowd that included NBA Champion Caron Butler and former DC Mayor Adrian Fenty, Paes and Reynolds dined on Lobster this time around. On deciding point in the first game, Gambill double-faulted, which set off a run of four consecutive games for the Kastles.

Reynolds made it 2-0 with two service winners, an ace and a stab backhand volley that died on the other side of the court. The Kastles took a 3-0 lead by attacking the middle of the court and opening up the alleys — Paes putting away an easy volley on break point. The Indian held for 4-0, and Reynolds did the same to win the set 5-1.

Reynolds kept the momentum in men’s singles, letting out a loud: “YEAH!” when he hit a dipping crosscourt forehand winner on Gambill’s first service point.

With a 2-0 lead, Reynolds saved three break points, the last on a service let that dribbled over the net. Gambill gave a good effort, but was unable to land the return, prompting the 2010 Rookie of the Year to kiss the top of the net. Reynolds put Washington ahead 15-5 at halftime with a service ace down the tee, finishing Gambill off 5-2.

Leander Paes won his third straight mixed doubles set with a Williams sister to start the 2011 season, teaming with Serena to blowout Boston’s Butorac and Vandeweghe 5-1. Both Serena and Paes hit winners at will, none more impressive than the one Serena struck to start the sixth game.

Following an extended rally in which Paes retrieved several difficult shots, Vandeweghe popped a volley up high and Serena moved forward for the kill. But Vandeweghe’s shot had so much backspin that the ball immediately bounced back over the net, forcing Serena to lunge over the strap without touching it. The Kastle did just that, keeping her balance while hitting a sharply-angled smash to draw a standing ovation that included raucous cheers from the Obamas.

Trailing 20-6 heading into the final set, the Lobsters needed two touchdowns to tie the score. But this is World TeamTennis, where points are much harder to come by. Still, the 19-year-old Vandeweghe managed to open up a 3-1 lead over Serena in women’s singles.

That prompted the 13-time Grand Slam singles champ to step up, and she held for 2-3 with a blistering backhand winner down the line.

In the following game, Serena and Lobsters’ Coach Bud Schultz shared a few chuckles after Schultz challenged two consecutive service calls. It was Serena who laughed last, hammering a clean crosscourt return winner following the reviews, and then breaking Vandeweghe for 3-3.

After each woman held serve for 4-4, the Americans matched each other shot for shot in the tiebreak. At 2-2, Vandeweghe rifled a return past Serena. The Kastle countered one point later with a service ace. Vandeweghe was the first to reach a set point at 4-3, but she double-faulted.

At 4-4, Serena held an opportunity to clinch the Kastles’ sweep, while Vandeweghe played to forced overtime.

The teenager made a bold choice to serve-and-volley. Though she successfully made two straight volleys, Serena passed her with a crosscourt forehand to seal a spectacular evening on the Southwest Waterfront and extend Washington’s perfect start to the season.