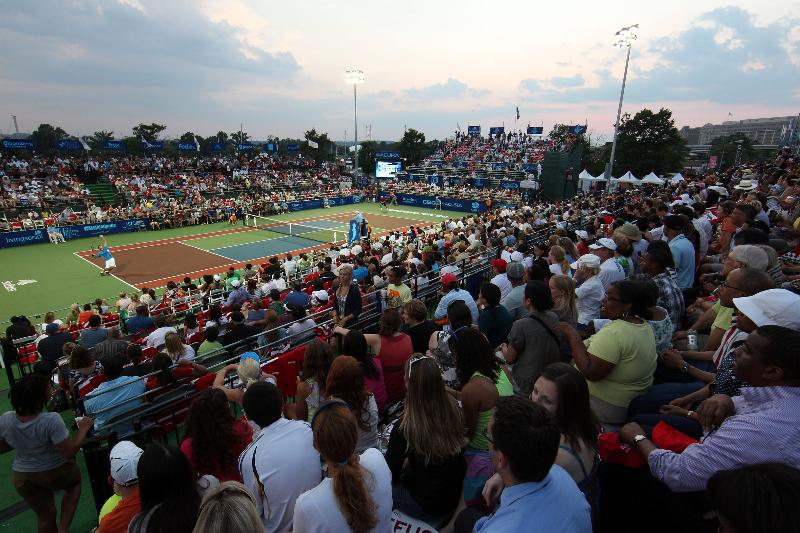 With an energetic, capacity crowd on hand for the historic home opener at Kastles Stadium at The Wharf, the Washington Kastles jumped all over the Kansas City Explorers early, and then withstood a late rally to earn a 21-18 win in overtime on Tuesday. It was a memorable night at Kastles Stadium that was witnessed by celebrities and notables from a wide range of fields, including basketball legend Kareem Abdul-Jabbar, Senior Advisor to the President Valerie Jarrett, Chief of Staff to the First Lady Tina Tchen, DC United Coach Ben Olsen, AOL founder Steve Case, Mayor Vincent Gray, Council Chair Kwame Brown, all of the local sports anchors, and ambassadors from a wide range of countries including Sweden, Chile and Indonesia.

The Kastles swept the first three sets to take a 15-8 lead going into halftime. But an inspired effort by Kansas City substitute Christina McHale nearly brought the Explorers’ back. After edging Venus Williams 5-4(4) in women’s singles, McHale teamed with Madison Brengle in women’s doubles, and won the first four games against Venus and Rennae Stubbs.

With the Kastles’ lead down to 19-17, Venus saved four straight set points on her serve to secure a crucial game. Though McHale served out the set in the next game, Stubbs held at love in overtime to clinch the win for Washington.

In the night’s opening set, Leander Paes and Bobby Reynolds of the Kastles shook off a slow start to defeat Alex Kuznetsov and Ricardo Mello 5-4(1). The teams exchanged breaks in the first two games, and then held serve all the way to the tiebreak.

That’s when the Kastles took over. Paes followed two big serves by Reynolds with a pair of volley winners to give Washington a 2-0 lead. On the next point, Paes dipped a return at Kuznetsov’s feet, allowing Reynolds an opportunity to smash an overhead winner past the Explorers.

Paes proceeded to poach for a volley winner, giving the Kastles a 4-0 lead. Though Kansas City saved one set point, Paes finished the Explorers off with a service winner.

Mixed doubles followed, with Paes and Venus meeting the unlikely Kansas City duo of Kuznetsov and McHale. The world No. 86 Mello was expected to play three sets for the Explorers, but after rolling his right ankle during practice early Tuesday, he was unable to extend himself after the men’s doubles set.

At 3-3 in the set, the Kastles broke McHale. Serving on deciding point in the next game, Venus Williams blasted a big first serve down the tee to set Paes up for an easy overhead winner, giving the Kastles a 10-7 lead overall.

Mello’s injury proved especially crucial in men’s singles, as Kuznetsov was forced to play three straight sets on short notice. His opponent from the Kastles didn’t help matters much.

Reynolds was relentless in his attack, winning all 12 of his points on serve. He broke for 2-0 with a beautiful backhand lob, and then captured a second break with a big backhand return to take the set 5-1.

By routing Kuznetsov, Reynolds gave Washington a seven-game advantage heading into halftime, which would prove insurmountable.

The women’s singles set between the 34th-ranked Williams and 66th-ranked McHale pitted the No. 2 American against the No. 3 American. McHale was a late substitution for Kveta Peschke, who won the Wimbledon women’s doubles title on Saturday, and was still in the process of traveling to the U.S.

The 19-year-old American appeared anything but intimidated at the occasion, retrieving Venus’ sharpest angles en route to a 3-1 lead.

But the Kastle did not go away quietly, breaking back for 3-3 with a punishing inside-out forehand winner. Venus hit two aces in the next game to move ahead 4-3, but McHale responded with a service hold of her own to force a tiebreak.

Even at 4-4 in the tiebreak, the players found themselves in a winner-take-all point. The ball was in McHale’s hands, and the youngest woman in the Top 100 hit a service winner to clinch Kansas City’s first set of the night.

Despite the finish to the women’s singles set, Washington led 19-13 going into women’s doubles. But a remarkable start by McHale and Brengle shocked Venus and Stubbs, who have combined to win 16 women’s doubles Grand Slam titles.

With Venus serving down 0-4, McHale and Brengle held a 0-3 advantage in the game, giving them four set points with the chance to go to overtime down just 19-18 in the team score.

Though they hadn’t played their best tennis, Venus and Stubbs rallied for the hold, giving Washington a 20-17 lead. McHale cut it to 20-18 with a hold of her own, but Stubbs found her best serves of the night in overtime, and Venus put away the final volley to give Washington a memorable opening night victory.