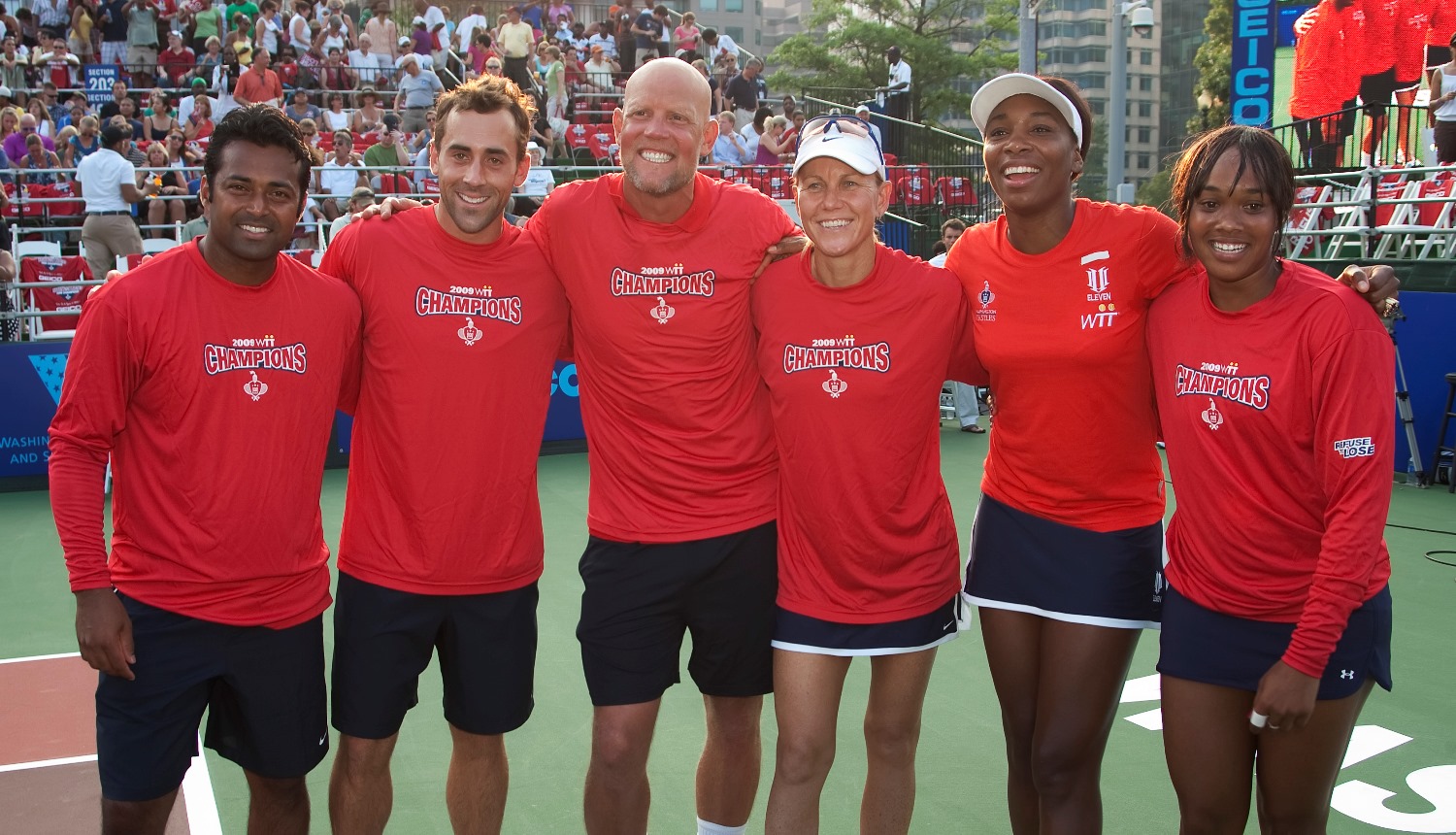 The Washington Kastles continued their celebration of their 2009 World TeamTennis Championship last night and also continued their great play, as Venus Williams helped win three sets to vault the team to a 25-15 win over the New York Buzz in a nationally televised affair.

The Kastles pulled off a rare sweep in winning all five sets.

A sellout crowd at Kastles Stadium saw Williams, the winner of seven Grand Slam singles titles, renew her rivalry with five-time Grand Slam champion Martina Hingis. Williams came through for the fans, as she fought off her Swiss counterpart to win the singles set, 5-4 in a tiebreaker.

“It was so much fun,” she said. “It was a sold out crowd and I was so happy we were able to get the win.”

The set between Hingis and Williams was worth the price of admission alone, as the two exchanged groundstrokes so heavy that Hingis was forced to borrow a racket after actually breaking a racket on a return and then strings on two other rallies.

“It was so tense,” Williams said. “She was hitting the ball so well.”

Williams and Hingis have met 21 times on tour, with Hingis holding a 11-10 edge, including a win in the 1997 U.S. Open final. But Venus had the edge last night.

It was an appropriately great display of tennis for a night that saw the Kastles honored for their league title last season.

Susan Sher, Assistant to the President and Chief of Staff to the First Lady, and Valerie Jarrett, Senior Advisor to the President, were also on hand for a pre-match ceremony with Kastles owner Mark Ein, King and Kloss.

“This year, the Kastles are looking to repeat, but more importantly it’s all of you that come out to support tennis in this community,” Kloss said to the fans in attendance. “We’d like to congratulate the team.”

Williams’ doubles skills also played a huge role in leading the Kastles to the overall victory, as she paired with Rennae Stubbs to top Hingis and Sarah Borwell, 5-3. Time and again, Williams put her penetrating groundstrokes and skilled shot-making on display, earning several standing ovations from the crowd.

Other members of the Kastles also helped make it a winning night in downtown D.C.

For the second night in a row, Bobby Reynolds got the Kastles off to a fast start by winning in singles. The number one overall pick in the WTT draft started off with three aces in the first four points and never looked back, going on to take the set 5-3 over the towering Alex Domijan. With the set tied at 3-all, Reynolds found himself down 3-1 in points, but used penetrating forehands to save the 3 break points to take the game. He later clinched the set, pumping his fist and throwing his wristbands into the exhilarated crowd.

Williams and Stubbs followed with their dominating doubles win to give the Kastles a 10-6 overall lead. Reynolds then joined Leander Paes to dominate the men’s doubles set, beating Domijan and Scoville Jenkins, 5-2.

Williams was back on court against Hingis a third time in the final set, as she and Leander Paes took on Hingis and Jenkins. Needing to win the set to avoid overtime, the Kastles duo came through, mixing up a stellar display of passing shots, lobs and skilled shot making to take the set, 5-3 and clinch the match. Williams and Paes appeared to have won the match a game earlier, after Hingis seemed to push a forehand long on match point. But the Buzz challenged the call, and replay showed the ball had just caught the baseline. Williams and Paes rebounded to win the next game and push the Kastles record to 2-1.

The Buzz fell to 0-3 after the loss. The Kastles travel to Philadelphia today for a rematch against the Freedoms, who the Kastles beat on Tuesday night, and this time with Venus Williams on the squad. On Friday, the team travels to play the Buzz again with Serena playing her first match for the team. Saturday’s match is in St. Louis with Venus in a Kastles uniform again against the Aces and Lindsay Davenport. The team returns to Kastles Stadium on Monday, July 12 for rematch against Hingis and the Buzz.